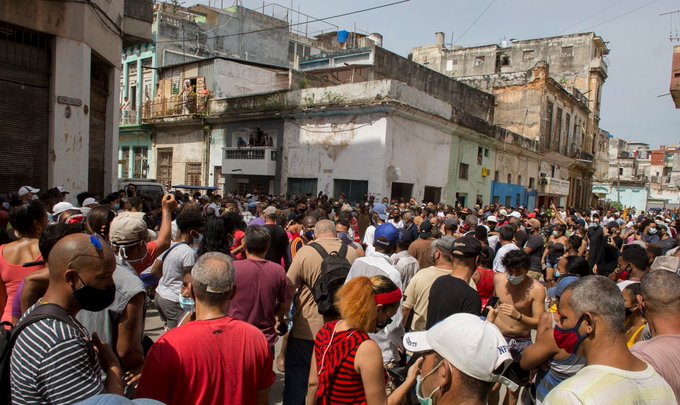 The left will tell you the crisis in Cuba has nothing to do with communism.

It has everything to do with communism.

Backing the protesters calling for liberation from communism in Cuba, former President Donald Trump issued a reminder of the Biden administration’s reversing his Cuban policies and calling on President Joe Biden to stand up against communism.

“I stand with the Cuban people 100% in their fight for freedom,” Trump wrote in a statement from his Save America PAC on Monday afternoon. “The government must let them speak and be free!

“Joe Biden MUST stand up to the communist regime or — history will remember. The Cuban people deserve freedom and human rights! THEY ARE NOT AFRAID!”

Trump noted the protests abruptly stopped in Cuba, remarking on the oppressive regime’s silencing of freedoms and speech – much like he has denounced from Big Tech and the liberal mainstream media in America.

“Big demonstrations are breaking out in Cuba and Miami in protest of the Communist Cuban Government (although, today there are zero protesters in Cuba — you know what that means!),” Trump’s statement began.

Trump also rebuked Biden’s reversing his administration’s “very tough stance on Cuba,” while reminding Americans former President Barack Obama – who Biden served as a vice president – was not only soft on Cuba, but welcoming.

“Don’t forget that Biden and the Democrats campaigned on reversing my very tough stance on Cuba,” Trump’s statement continued. “Remember when Obama attended baseball games with Castros while they imprisoned, beat, and killed the Cuban people.”

Trump’s strict embargo against Cuba was imposed after he took the White House from Obama in 2017, and Diaz-Canel pointed to those for causing an energy shortage in Cuba, which triggered the uprising that saw the first mass anti-government protests in decades on the island.

Diaz-Canel also railed against “Miami’s conservative Cuban-American mafia” for fueling the unrest as Cubans were already exhausted and living uneasy with surging COVID-19 infections on the island, according to The Associated Press.

Protesters looted and flipped a police car, according to the president, scenes similar to the anti-China protests in Hong Kong more than a year ago and the social injustice unrest in America led by Black Lives Matter and Antifa activists after the death of George Floyd.

At this time of Fidel Castro’s passing, we extend a hand of friendship to the Cuban people. We know that this moment fills Cubans – in Cuba and in the United States – with powerful emotions, recalling the countless ways in which Fidel Castro altered the course of individual lives, families, and of the Cuban nation. History will record and judge the enormous impact of this singular figure on the people and world around him. For nearly six decades, the relationship between the United States and Cuba was marked by discord and profound political disagreements. During my presidency, we have worked hard to put the past behind us, pursuing a future in which the relationship between our two countries is defined not by our differences but by the many things that we share as neighbors and friends – bonds of family, culture, commerce, and common humanity. This engagement includes the contributions of Cuban Americans, who have done so much for our country and who care deeply about their loved ones in Cuba.

Today, we offer condolences to Fidel Castro’s family, and our thoughts and prayers are with the Cuban people.

I am certain that the “most refined” among us, “the smartest people in the room” as they refer to themselves, the Modern American Liberals, including the Former Chief Marxist/Alinsky-ite himself, Barack Hussein Obama, and the Administration of his Former Vice-President, #DementiaJoe, are aghast at the protesters calling for the end of the Cuba’s “perfect form of government”(Marxism) which they are trying to install in our Sovereign Nation.

Why do Modern American Liberals admire those leaders and societies, like the government of Communist Cuba, the leaders of whom would take away their individual freedom, at best, and gut them like a Thanksgiving Turkey, at worst?

How could they be so naïve as to view he poverty-stricken Communist country as being a “Socialist Utopia”, which they have dreamt of and which they are trying their best to turn America into, you ask?

They remember Che differently than the Cuban Exiles in Miami, who came here seeking freedom from tyranny do.

In the instruction to that book, Fontova writes that,

If Cuban Americans strike you as too passionate, over the top, even a little crazy, there is a reason. Practically every day, we turn on our televisions or go out to the street only to see the image of the very man who trained the secret police to murder our relatives—thousands of men, women, and boys. This man committed many of these murders with his own hands. And yet we see him celebrated everywhere as the quintessence of humanity, progress, and compassion.

So, while President Obama and his family were jetting to Cuba, on Air Force One, on the American Taxpayer’s dime, celebrating the “Progressive Freedom” that only Marxism can bring (that’s sarcasm, boys and girls), America’s Che Worshippers were back home, wearing their Che T-shirts, brandishing posters proclaiming American Businessman, Entrepreneur, and then-Leading Republican Primary Candidate Donald J. Trump a “fascist”, and a modern “Hitler”, while blocking roads, jumping on people’s cars, and marching lockstep on the streets of New York City, in scenes reminiscent of the Cuban Revolution.

Only now, it is the “Woke” Movement.

What we are witnessing among the Far Left Power Brokers, and their “Young and Dumb Foot Soldiers”, is a purposeful obtuseness, as to our Constitutional Rights to arm ourselves and vote for whom we please and the harsh reality of Marxism or “spreading the wealth”.