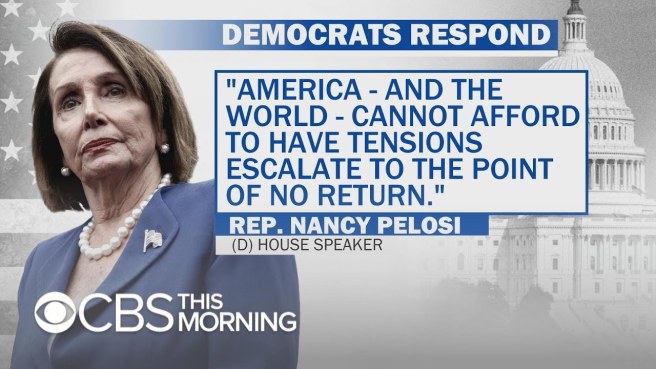 Ilhan Omar is more upset that President Trump killed a terrorist than when the terrorists attacked our embassy.

Let that sink in…

The Washington Post raised eyebrows on Friday after it apparently suggested that only Republicans consider deceased Iranian Gen. Qassem Soleimani to be a “war criminal.”

“As Republicans praised President Trump for a decisive blow against a man they consider a war criminal, Democrats expressed concern that the killing could be a dangerous step toward war,” the Post tweeted.

The tweet sparked quite the reaction on social media.

“He was the leader of a terrorist organization you idiots. No one ‘considers’ him a war criminal. HE IS ONE,” political strategist Caleb Hull said in response.

“So only Republicans consider the guy who ordered the killing of 600 American soldiers, and the slaughter of thousands of men, women, children in Syria and across the globe a war criminal?” the Reagan Battalion asked.

“I think we can safely say that he most definitely is a war criminal,” one Twitter user said.

“I think most people considered him a war criminal, not just Republicans,” another similarly stated.

“Whoever writes the Wapo social media must be hellbent on destroying their credibility,” a third wrote.

Soleimani was the long-running leader of the elite intelligence wing of the Islamic Revolutionary Guard Corps, the Quds Force, which the U.S. designated a terror group in 2007 and is estimated to be 20,000 strong. Considered one of the most powerful men in Iran, he was routinely referred to as the “shadow commander” or “spymaster.”

The Post also received backlashon Thursday for referring to Soleimani as Iran’s “most revered military leader” in its breaking news headline.

Yesterday, Democrats ranging from those taking up space on Capitol Hill to the Trolls expectorating all over President Trump’s Twitter Feed, were sounding off as if the President had murdered their closest friend.

It was sickening to see Americans run to the defense of a vile, evil man like General Soleimani.

Those Iraqis who were dancing in the streets over the death of the murdering Radical Islamist would have disagreed vehemently with the idiot at WAPO who had written such trash.

Speaking of Democrats taking up space on Capitol Hill…

Rep. Alexandria Ocasio-Cortez, D-N.Y., blasted President Trump’s decision to strike one of Iran’s top military commanders, arguing that doing so risked war and the loss of millions of lives.

“Last night the President engaged in what is widely being recognized as an act of war against Iran, one that now risks the lives of millions of innocent people,” she tweeted on Friday.

…Ocasio-Cortez pressed Congress to take action. “Now is the moment to prevent war & protect innocent people – the question for many is how, publicly & Congressionally,” she said.

The New York congresswoman proposed that her colleagues vote on the War Powers Resolution, the Vietnam War-era legislation that requires the president to get Congressional approval before keeping troops in conflict for a set period of time. The law has been routinely flouted by previous administrations.

She also promoted a resolution that would block money from flowing to offensive action against Iran. “This amendment passed the House w/ bipartisan support not long ago, and was later gutted in negotiations. We can bring it back as a standalone bill,” she said.

Americans should ignore the “cheerleaders of war” and warned against “gaslighting,” Ocasio-Cortez argued.

“Right now is the moment to decide if you are pro-peace or not,” she tweeted. “The cheerleaders of war, removed from its true cost, will gladly convince you that up is down – just as they did in Iraq in ‘03. But war does not establish peace. War does not create security. War endangers us all.”

I swear, that chick is so dumb she believes that the St. Louis Cardinals were elected by the Pope.

The Democrats have become just as big a threat to America’s Sovereignty and Freedom as Iran has.

While Iran has promised to end us through violence, the Democrats have been attempting for quite a while to destroy us through “Radical Change”, trying to turn this Constitutional Republic into a Democratic Socialist Marist country, in which our direction would be ruled by the most densely-populated areas on the East and West Coasts, thereby disenfranchising and “shutting up” those of us who live in American’s Heartland.

The Democrats’ hatred for President Trump and those Americans who voted him into office is the reason that they have become vocal, if not physical bedfellows with the Radical Islamic Roque State of Iran.

The same seditious treason which led to Spygate and the House Impeachment Vote of President Trump has, quite literally, turned the Far Left Democrats into enemies of America.

In the days of our Founding Fathers, they would have been branded as traitors and dealt with according to the methods of the time.

Nowadays, we can let them know what we think of them on Social Media and at the Ballot Box in November 2020.

And, that will have to suffice.

What a bunch of lowlifes.