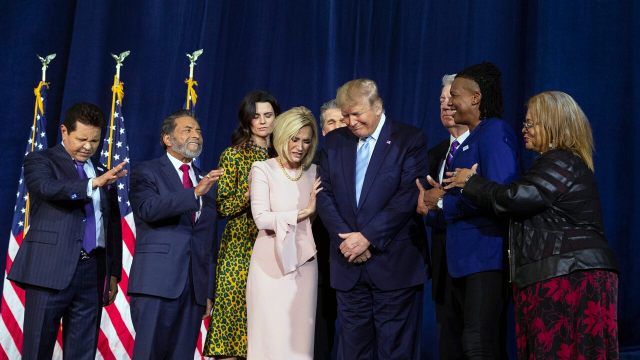 “The left presumes the right to lecture the people it despises for the sin of not voting for them. This may shock some Democrats but most Christians don’t actually think they have a religious duty to be destroyed by people who hate them.” – Tucker Carlson

President Donald Trump launched his “Evangelicals for Trump” coalition Friday night, telling hundreds gathered at one of the country’s largest Hispanic megachurches that evangelical support for his re-election will be even greater than it was for his election campaign in 2016.

The event and coalition were announced one day after a Christianity Today editorial last month denounced the president and called for his resignation. That editorial quickly put the political divisions within evangelicalism in the national spotlight and was followed by a letter from nearly 200 evangelical leaders denouncing both CT and its outgoing editor Mark Galli.

“In 2016, evangelical Christians went out and they worked so hard and they produced numbers like they have never produced before,” Trump told the crowd. “Based on what Paula told me and Cissie told me and everybody told me, we are going to blow those numbers away in 2020.”

Exit polling suggests that 76 percent of self-identified white evangelicals voted for Trump in the 2016 election. Since his election, Trump said he has been fighting for evangelicals and has “achieved results nobody thought was possible.”

People pray together during the ‘Evangelicals for Trump’ campaign event held at the King Jesus International Ministry as they await the arrival of President Donald Trump on January 03, 2020 in Miami, Florida. | Joe Raedle/Getty Images
Despite political gains in those areas, however, some evangelicals have voiced concerns about Trump’s behavior and his administration’s immigration and refugee policies.

“Evangelicals and Christians of every denomination and believers of every faith have never had a greater champion … in the White House than you have right now,” Trump declared. “I am not saying that in any other way other than just look at the record. Together, we are not only defending our constitutional rights, but we are also defending religion itself, which is under siege.”

Trump told cheering supporters that although his administration is “winning,” the country cannot let “one of our radical left friends” take office.

“Because everything we have done will be gone in short order,” he asserted. “It will be taken away pretty quickly. It’s a powerful position.”

He called for faith and family to be renewed as the “center of American life” in order for America to thrive.

“There are those who say these sacred beliefs are outdated. But we know they are just the opposite,” Trump stressed. “Our traditions and our values are timeless and immortal. [The political left] don’t know what they are missing. Our faith is needed now more than ever.”

He stressed that while some fads come and go, it is an “eternal truth” that faith and family lead to “stability, happiness, and prosperity of nations.”

“Yet as we speak, every Democrat candidate running for president is trying to punish religious believers and silence our churches and our pastors,” Trump contended. “Our opponents want to shut out God from the public square so they can impose their extreme anti-religious and socialist agenda on America.”

However, Trump vowed that he is not only going to win re-election, but Republicans will also take back the U.S. House and maintain control of the U.S. Senate.

“This election is about the survival of our nation,” he said. “With your help, your prayers and tireless effort to mobilize Christian communities across our land, on Nov. 3, 2020, … we are going to win another monumental victory for faith and family, God and country, flag and freedom.”

“I really do believe we have God on our side,” he added. “There would have been no other way we could have won [in 2016], right? People said, ‘You don’t have the media, you have so many things against you.’ But we win. So it has to be something.”

Also speaking at the event was Cissie Graham Lynch, the granddaughter of famed evangelist and Christianity Today founder, Billy Graham. She is also the daughter of evangelist and Trump supporter Franklin Graham.

President Trump is exactly right. The Far Left Democratic Party wants nothing to do with the God of Abraham.

Just this past week, on last Sunday’s Meet the Press, NBC News anchor Chuck Todd read and endorsed a letter claiming that supporters of Donald Trump “want to be lied to” since they believe in “fairy tales” such as Noah’s ark.

As a Christian American, I believe that, even though there have been many Biblical translations and resulting inaccuracies of the centuries, the Bible is still the fundamental Word of God.

I also believe that when a denomination stops teaching God’s Word and starts teaching man’s Popular Culture that the presence of the Holy Spirit begins to be diminished in their sanctuaries causing believers to leave the denomination until those who wish to “radically change” the Word of God to fit popular culture are in control.

When that happens, chaos ensues, churches close or leave the denomination, or the denomination itself splits, such as is happening within the formerly “United” Methodist Church.

For several decades now, the Democratic Party, relying on Far Left Ideologues or their own opinion as their “highest authority”, have made a determined effort to eliminate the practice of American Christianity and the Traditional American Morality and Ethics which go with it from Everyday American Life, attempting to regulate Christians’ role in American Society as remaining unseen and unheard from, worshiping in private, on Sunday mornings, only.

Or, as Actor and Professional Wrestler Dwayne “The Rock” Johnson would say, Modern American Liberals want American Christians to

Sit down, shut up, and know your role!

Unfortunately for them, President Donald J. Trump reinforced our rights as Americans to our Faith with an Executive Order early in his Presidency.

The First Amendment to the Constitution still holds.

Being filled with human beings, America’s churches have made a lot of mistakes, However, they have also done a lot of good in the Name of the Lord.

For example, the church I attend, helps support a Food Pantry, operated in co-operation with other churches in our area, which feeds 2,000 people per month, counseling them, and getting them the assistance that they need.

Churches today have to walk a fine line.

The spiritual battle raging between the influence of American Popular Culture and those seeking the Will of God in their lives, takes all the strength…and prayer, that Christians can muster.

Modern Liberals seem to have great difficulty comprehending the role which Our Creator, the God of Abraham, played and plays in this Grand Experiment, known as the United States of America.

Why are they so focused on removing America’s Christian Heritage?

Well, as is usually my wont, I have been doing some “reckoning” about this.

It seems to this ol’ Southern Boy, living here in the Heartland, that America’s Christian Heritage and the very real fact of His influence in building and shaping America’s growth into the greatest country on the face of God’s Green Earth, not only stifles and interferes with Modern Liberals’ “anything goes”, “share the wealth”, “hive-mind”, “man is his own god” Political Ideology, but the reality of God’s very existence, somewhere deep in their miserable, bitter psyches, scares the mess out of them.

Why else would they be trying so hard to fight against the influence of Someone Whom they really don’t believe in?

And, a second and final thought occurred to me while watching the Far Left Democrats refuse to acknowledge God and the solid points which President Trump made during his Evangelical Rally.

The Democrats “War on Traditional American Christianity” is why the Democrats lost on November 8, 2016 and why they will continue to lose in the future.

The fool says in his heart, “There is no God.” They are corrupt, they do abominable deeds; there is none who does good. – Psalms 14:1