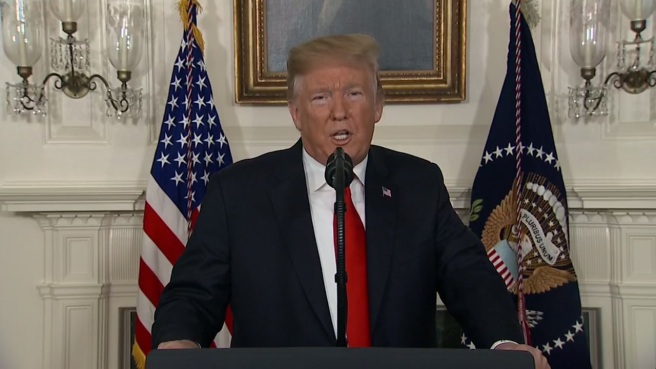 Nancy Pelosi and the Democrat Party care about one thing: making sure that nobody like Donald Trump ever tries this again. – Rush Limbaugh 1/17/2019

President Trump, in a televised White House address Saturday, offered Democrats a compromise package on immigration in an effort to end the nearly month long partial government shutdown — although some prominent Democrats were dismissing the olive branch as a “non-starter” before Trump even spoke.

Trump announced that he was prepared to back a three-year extension of protections for 700,000 immigrants who came to the country illegally as children and were shielded from deportation under the Obama-era Deferred Action for Childhood Arrivals (DACA) program. This, in exchange for the $5.7 billion he has requested for a barrier on the southern border with Mexico.

“Walls are not immoral,” he said, adding that a wall “will save many lives and stop drugs from pouring into our country.”

“This is not a concrete structure from sea to sea,” he said, addressing some previously expressed concerns about the so-called “wall.” “These are steel barriers in high-priority locations.”

The offered deal would also extend protections for 300,000 recipients of the Temporary Protected Status (TPS) program — which protects immigrants from designated countries with conditions that prevent nationals from returning safely.

“Our immigration system should be a source of pride, not a source of shame as it is all over the world,” Trump said, before urging politicians to “take off their armor” and find solutions.

It would allocate $800 million for drug detection technology to secure ports of entry, 2,750 new border agents and law enforcement professionals, and 75 new immigration judges to reduce an immense backlog of asylum requests.

He said that all his proposals have been supported by Democrats before.

And, of course, House Speaker Nancy Pelosi and the rest of the House Hive-mind rejected the President’s deal as soon as he spoke it.

The hypocrisy and blatantly self-serving actions of the House Democrats remind me of a bunch of 11 year olds who did not get what they wanted for Christmas.

For all of their bluster and planted sob stories in the Main Stream Media about how much they care for the 800,000 government workers who are not getting their paychecks because of the shutdown, the Dems’ actions tell a completely different story.

They honestly do not give a hoot ‘n holler about those government workers. This is all about a bunch of spoiled Far Left Democrats holding a Sovereign Nation hostage in order to get their way.

They are refusing Trump’s request for a barrier along our Southern Border because they want those thousands of illegals to come right on into our country…and become Democrat voters.

As proven in the 2016 Presidential Election, the Democrats’ embracing of Marxism has lost them the Middle Class.

And, they are still throwing a temper tantrum over it.

Average Americans want nothing to do with the Far Left Liberals who are in power in the Democratic Party, so they have to bring in new voters as quickly as possible.

Their desperation is such that they no longer care that they are showing their poateriors to the entire nation by refusing to compromise of proposals which they used to readily embraced and advocate for.

And, President Trump already knows this.

The man wrote a book titled, “The Art of the Deal”. He knows how to negotiate.

By continuing to offer to negotiate, he is coming off as “the only adult in the room”.

If Pelosi and the House Democrats continue to act like petulant children, President Trump needs to spank them by declaring a National Emergency, allocating the funding necessary, and taking care of the Border Situation himself.

It is time for Pelosi and the House Democrats to grow up.