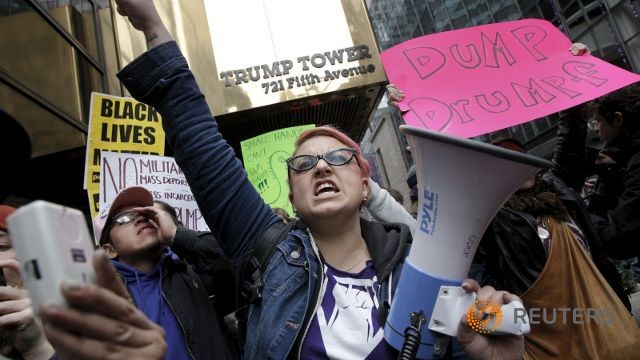 Overestimation of the popularity of one’s Political Belief System has been a staple of those who claim to be “the most tolerant among us”, the Modern American Liberal.

Yesterday, they proved that both claims are a blatant lie.

Protesters demonstrating against Donald Trump blocked the streets outside Trump’s Arizona rally Saturday, making good on earlier promises to disrupt the GOP front-runner during his visit to the border state.

The activists, carrying signs that declared “Dump Trump” and “United Against Hate,” shut down a main Arizona highway leading to the city of Fountain Hills, where Trump held a campaign event Saturday afternoon.

Protesters in cars and on foot encountered Maricopa County police during the demonstrations. Local media reported that some activists chained themselves to their cars in order to delay the towing of vehicles.

Sheriff Joe Arpaio, the controversial tough-on-immigration head of the Maricopa police who has pledged to provide security for the Trump event, said Saturday that his officers were working on the protests.

“We’re taking proper action,” Arpaio told MSNBC in a phone interview as the demonstrations continued. “I think a few cars are blocking the road… and we are removing the cars. Anybody that violates the law is going to jail.”

“My main mission is to take care of the safety, security of Trump plus everybody else that lives in that town,” the sheriff added.

Arpaio, who has given Trump his endorsement, took the stage before the billionaire businessman at the rally. He announced that at least three people had been arrested from the protests.

When Trump spoke at his campaign event, he only touched briefly on immigration in his opening remarks, slamming politicians for being “all talk, no action” on the issue.

“They’re never going to do anything,” Trump told supporters. “This country has a big big problem with illegal immigration.”

Trump, who has made erecting a border wall a cornerstone of his presidential campaign, has drawn increasing fire over his contentious rhetoric on illegal immigration during the past month.

Earlier this week, one leading pro-immigration-rights group, Puente Arizona, denounced Trump as a “racist” and organized the border state protests via Facebook. Several thousand users indicated on the social media site that they would attend the demonstrations, scheduled just days before Arizona’s primary contests on Tuesday.

While that was going on in Arizona, both paid and unpaid protestors marched to Trump Tower in New York City, per the CBS Local Affiliate…

Several hundred demonstrators gathered in Manhattan on Saturday to protest Republican presidential front-runner Donald Trump, marching from one skyscraper that bears his name to another.

The protesters, that included immigrants’ rights activists, students and socialists, gathered in Columbus Circle near the Trump International Hotel and Tower. They then marched across Central Park South to Trump Tower on Fifth Avenue where Trump lives before returning to Columbus Circle for a rally.

“I think Donald Trump is speaking a message of fascism and racism, and I don’t think that’s good for America,” said Laura Merrill, a tour guide who supports Democratic Vermont U.S. Sen. Bernie Sanders for president.

There was a heavy police presence for the largely peaceful protest, and officers used megaphones to warn demonstrators to stay on the sidewalk, out of the streets and not to impede foot traffic.

At least two protesters were arrested for walking in the street. A group of demonstrators that tried to break through a police barricade was pushed back by officers, who used pepper spray.

Protester Redentor Tarona, who marched as a member of a Filipino-American youth organization, said no one there wanted to promote violence.

Some protesters at the event told 1010 WINS’ Samantha Liebman that they couldn’t believe Trump has come this far in the election and that they believe his rhetoric is divisive and racist.

“We’re here because Donald Trump is the antithesis of what America stands for,” one Westchester man said.

“Donald Trump is a danger to America,” a man told WCBS 880’s John Metaxas. “If nobody stands up and be counted, our country’s democracy will be taken away from us.”

“We gotta make sure we get out and vote and make sure our voices are heard,” another protester from Manhattan said.

Demonstrators chanted “Donald Trump, go away, racist, sexist, anti-gay” and “Immigrants are welcome here. Don’t give in to racist fear.”

Others carried signs that read “Love Trumps Hate.” Another read “Will trade 1 Donald Trump for 25,000 refugees.”

That is why I call the actions of these insufferable idiots, like the ones on full display yesterday, “The Tyranny of the Minority”.

So, anyway, here we are…with a bunch of paid and unpaid “useful idiots” telling all of us normal Americans, living out here in the Heartland, how stupid and intolerant we are, for actually holding to Traditional American Values.

I have heard this garbage before.

Back in 2011, I got into a discussion on Andrew Breitbart’s Big Government website with some Cheetos-munching, Mom’s basement-dwelling Lib with no home training, who proceeded to tell me that he would be proud to defecate on the American Flag.

If I could have reached through my computer monitor and throttled that useless, ungrateful spoiled brat, I would have.

That “dude” was yet another example of the useful idiots of this present generation, such as Miley Cyrus, that seem to be garnering a lot of national attention for their outrageous, disrespectful…and, yes, intolerant, behavior.

Just as we have been bearing witness for the last couple of years, through the glorification of thugs and the vilifying of our local police departments by the Obama Administration and the local “communities” which they lay their lives on the line for, every day they put on their uniforms, the effects of LBJ’s “Great Society” on American Culture and the Black Family Unit, so are we witnessing, through the egocentric behavior of this present generation, what happens when children are left to “their own devices”, instead of being raised “in the way in which they should go”.

These “spoiled brats”, like their imperious President, do not care about the “Will of the People”, but, rather, they are intent on implementing and enforcing their Far Left Political Ideology, resulting in a “Tyranny of the Minority”, which we are seeing play out, as they attempt to hold on to their “FREE STUFF” bestowed upon them by the “benevolent masters” of the Democrat Party, by trying to block Donald J. Trump’s pathway to the Presidency.

The use of Karl Marx/Saul Alinsky-inspired “Class War Politics”, including “Racial Rhetoric”, and Barack Hussein Obama’s own petulant, belligerent personality of a 12-year-old, has inspired these “protestors”, leading to a divided nation, the likes of which has not been seen since “The War of Northern Aggression”.

And, that Sacred Document, our United States Constitution, gives each of us the right, including Trump, to speak our minds and be heard.

It gives those protestors that right, too…but, not at the expense of others, by strong-arming their way into Political Rallies, or by blocking access to them, for the expressed purpose of denying someone their First Amendment Rights.

One thought on “The Trump Protests: The Tyranny of the Minority = The Intolerance of the Left”