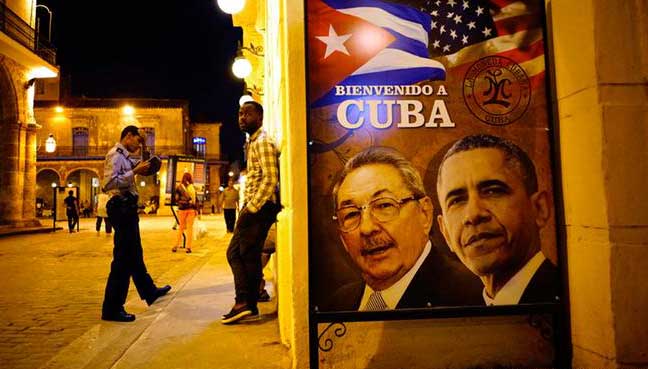 We are calling on Cuba to unleash the potential of 11 million Cubans by ending unnecessary restrictions on their political, social, and economic activities.  In that spirit, we should not allow U.S. sanctions to add to the burden of Cuban citizens that we seek to help. – President Barack Hussein Obama, December 17, 2014

Those who cannot remember the past are doomed to repeat it. – George Satayana

Just hours before President Obama landed Sunday in Cuba for his historic visit to the communist island, Cuban authorities arrested more than 50 dissidents who were marching to demand improved human rights.

Members of the group, known as the Ladies in White, are used to the routine. They march each Sunday after Mass at a church in a suburb of Havana called Miramar and usually get arrested and detained for hours or days.

Some in the group thought Cuban authorities would back off this Sunday out of respect for Obama’s visit. Berta Soler, one of the founding members who has been marching since 2003, said while walking to the church Sunday morning that maybe they would be allowed to protest without getting arrested.

“Everything looks good so far,” she said.

Despite dozens of international reporters in town for Obama’s trip, the group was quickly rounded up in buses and police cars.

“For us, it’s very important that we do this so President Obama knows that there are women here fighting for the liberty of political prisoners,” Soler said before being arrested. “And he needs to know that we are here being repressed simply for exercising our right to express ourselves and manifest in a non-violent way.”

Obama’s three-day trip to Cuba is to highlight the new relationship between the Cold War foes. After more than five decades of political and economic isolation, the two nations announced in December 2014 that they would re-establish diplomatic relations. Embassies have since reopened in Havana and Washington, U.S. cellphones can be used in Cuba, U.S. airlines are planning direct flights to the island, and several U.S. companies have struck deals to trade with Cuba.

Obama is expected to embrace those changes during his trip, but the issue of human rights has been the most difficult negotiating point leading up to his visit. Secretary of State John Kerry was supposed to visit the island ahead of Obama’s trip but canceled because of disagreements over whom he could meet with.

The White House has said that Obama will meet with a group of dissidents on Tuesday, but several have said they’re unsure whether they’ll be able to attend.

Guillermo Farinas, a leading voice in Cuba’s civil rights movement who is part of the group that could meet Obama, is camped out at a friend’s house this week because he said Cuban authorities have ordered him to be on house arrest. He said many other dissidents like him are being blockaded in their homes ahead of Obama’s visit. Because of that, he said Obama has a “moral responsibility” to strongly criticize Cuba’s human rights record and push the government to improve before the U.S. further expands its relationship with Cuba.

“The most important thing for us is that President Obama doesn’t allow the Cuban government to use his visit to create an image of complicity with the actions of the totalitarian regime,” Farinas said.

The Cuban government declined to comment on Farinas’ claim that he and other dissidents were under house arrest.

They remember Che differently than I am sure that you and those of your countrymen that are seeking freedom from tyranny do.

In the instruction to that book, Fontova writes that,

If Cuban Americans strike you as too passionate, over the top, even a little crazy, there is a reason. Practically every day, we turn on our televisions or go out to the street only to see the image of the very man who trained the secret police to murder our relatives—thousands of men, women, and boys. This man committed many of these murders with his own hands. And yet we see him celebrated everywhere as the quintessence of humanity, progress, and compassion.

So, while their President and his family were jetting to Cuba, on Air Force One, on the American Taxpayer’s dime, celebrating the “Progressive Freedom” that only Marxism can bring (that’s sarcasm, boys and girls), America’s Che Worshippers were back home, wearing their Che T-shirts, brandishing posters proclaiming American Businessman, Entrepreneur, and Leading Republican Primary Candidate Donald J. Trump a “fascist”, and a modern “Hitler”, while blocking roads, jumping on people’s cars, and marching lockstep on the streets of New York City, in scenes reminiscent of the Cuban Revolution.

What we are witnessing among the Far Left Power Brokers, and their “Young and Dumb Foot Soldiers”, is a purposeful obtuseness, as to both our Constitutional Rights and the harsh reality of Marxism.