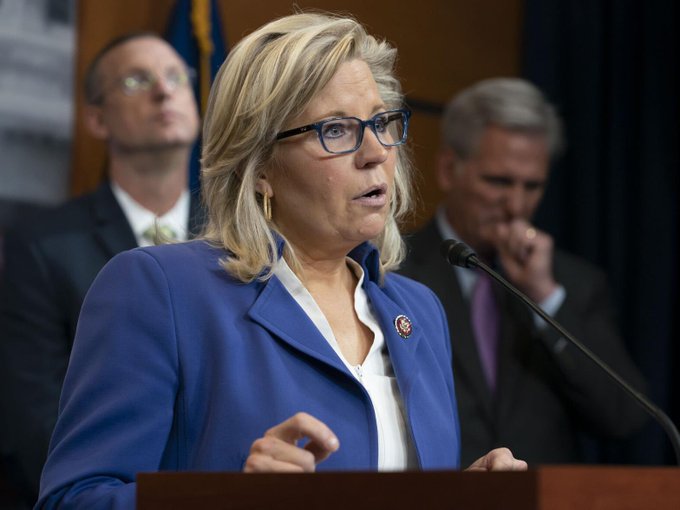 Liz Cheney is a warmongering fool who has no business in Republican Party Leadership. We want leaders who believe in the Make America Great Again movement, and prioritize the values of America First. Elise Stefanik is a far superior choice, and she has my COMPLETE and TOTAL endorsement for GOP Conference Chair. Elise is a tough and smart communicator! – From the Desk of Donald J. Trump, 5/5/21

Rep. Liz Cheney (R-WY) wrote that the Republican Party is at a “turning point” and must decide “whether we will join Trump’s crusade to delegitimize and undo the legal outcome of the 2020 election, with all the consequences that might have.”

Cheney offered her commentary in an op-ed for the Washington Post, published Wednesday.

“We Republicans need to stand for genuinely conservative principles, and steer away from the dangerous and anti-democratic Trump cult of personality,” Cheney wrote.

With her House leadership role as GOP conference chair in jeopardy, Cheney writes that Trump’s language about the 2020 election “provoked violence on January 6.” Trump, who was banned from social media platforms, recently launched his own method of communicating with his supporters. There, he wrote, “the Fraudulent Presidential Election of 2020 will be, from this day forth, known as THE BIG LIE!”

“While embracing or ignoring Trump’s statements might seem attractive to some for fundraising and political purposes, that approach will do profound long-term damage to our party and our country,” Cheney wrote. “Trump has never expressed remorse or regret for the attack of Jan. 6 and now suggests that our elections, and our legal and constitutional system, cannot be trusted to do the will of the people.”

This is immensely harmful, especially as we now compete on the world stage against Communist China and its claims that democracy is a failed system,” she continued.

Cheney also addressed recent violence from groups such as Black Lives Matter and Antifa, but noted those are a “different problem with a different solution.”

This woman has lost her RINO mind.

Donald J. Trump did more in three years to enrich the pocketbooks of America’s Middle Class and to raise the employment levels of Black and Hispanic Americans than any American President before him.

The reason that Donald J. Trump remains the overwhelming choice of Republicans to run in the 2024 Presidential Election is because he actually has a spine.

He is unafraid to place American and Americans First.

He is not answerable to any lobbyist or any other country.

He is also NOT responsible for what happened on January 6th. It was preplanned before he ever gave his speech that day.

And before everything is said and done, it believe that the fact that Mitch McConnell and Nancy Pelosi were in on the “insurrection in order to damage Trump.

We still do not know the name of the officer who shot and killed unarmed Ashli Babbitt.

Liz Cheney is a nothing but a Democrat but-kissing Warhawk Swamp Creature who lives is the Washington D.C. Country Club along with the other RINOs.

Like the rest of the Vichy Republicans, Liz Cheney thinks more of her “colleagues across the aisle” than she does of actual Conservative Republicans, both in Congress and here in America’s Heartland, where we cast our 2016 Vote for Donald J. Trump.

Vichy Republicans, like Liz Cheney, need to be purged from the Republican Party in 2022 and again in 2024, before their spineless acquiescence allows the Democrats to turn America into just another Marxist Nation.