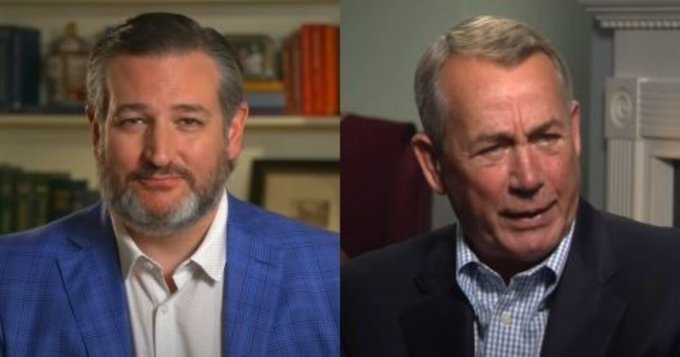 U.S. Sen. Ted Cruz doubled down on his response to former House Speaker John Boehner after he told the Texas Republican to “go f**k yourself” in a leaked audio recording.

“I think he was probably recording at nine or ten in the morning so obviously he had too much wine that day already,” Cruz told the Daily Caller on Saturday. “This guy is a little unhinged.”

Cruz on Friday mockingly tweeted that he wears Boehner’s “drunken, bloviated scorn” proudly alongside a clip from an upcoming CBS News interview with Boehner in which he calls Cruz a “jerk” and accuses him of “making a lot of noise” but not being especially productive in Congress.

“The Swamp is unhappy,” Cruz tweeted. “I wear with pride his drunken, bloviated scorn. Please don’t cry,” the lawmaker joked, referencing Boehner’s reputation for appearing publicly emotional at various points throughout his career.

The ex-speaker has taken several shots at Cruz, including while recording his audiobook when he reportedly told Cruz to “f—” himself in several off-script moments.

In the CBS interview, Boehner says he doesn’t like to “beat anyone up” but he’d make an exception for Cruz.

“Perfect symbol, you know, of getting elected, making a lot of noise, draw a lot of attention to yourself, raise a lot of money, which means you’re gonna go make more noise, raise more money,” Boehner told CBS of how he views Cruz’s political career.

Boehner, an Ohio Republican who served as House speaker from 2011-2015, has been making the interview rounds promoting his book, “On The House: A Washington Memoir,” which comes out next week. Boehner represented Ohio’s 8th Congressional District from 1991-2015.

Cruz made a joke of it at the Conservative Political Action Conference (CPAC) in Florida in February, saying, “John Boehner made some news. He suggested that I do something that was anatomically impossible. To which my response was, ‘Who’s John Boehner?'” according to The Hill.

Cruz on Saturday noted that the “lead insult on the back on the back of the book is a different insult he directed at me.”

He seems to have a bit of an obsession,” Cruz said.

Asked whether he planned to write a book about Boehner in response, Cruz said plainly, “I don’t anticipate writing a fortune cookie about him.“

Here is some information you may not have known about the Former Speaker of the House, courtesy of sourcewatch.org, from a blog I wrote in March of 2013…

Boehner served as a Ohio state representative from 1985 to 1990. In 1990, when U.S. Rep. Donald “Buz” Lukens (R-Ohio) was caught in a sex scandal involving a minor, Boehner challenged Lukens in the Republican primary and defeated the incumbent, while also upsetting the district’s former representative, Tom Kindness, who Boehner declared had abandoned his district to become a lobbyist. Boehner went on to victory in the 1990 general election and began serving in the U.S. House of Representatives the 102nd Congress.

He was a member of the Gang of Seven, a group of seven freshmen Republicans who assailed the Democratic leadership with accusations of corruption and arrogance over the misuse of the House Bank. According to a 1992 San Francisco Chronicle article the Gang “set the match to the bank scandal that has now engulfed the House, blackened its leadership and sparked a ‘spontaneous political combustion’ that many analysts say will fuel a record turnover in Congress.” (San Francisco Chronicle, 3/30/02)

The banking scandal involved 355 members, Democrats and Republicans, writing 8,331 overdrafts to the bank. The Gang pounced on the issue and forced the Democrats into a corner and eventually led to the tidal wave Republican Revolution of 1994.

Boehner came to Congress as one of the most pro-business, anti-government members in 1990. He advocated a flat tax and abolition of whole government agencies including the Department of Education and the Occupational Safety and Health Administration (OSHA).

Boehner was on of the principal architects of the Contract With America. He also championed the 1996 Freedom to Farm Act.

When Newt Gingrich resigned his post as Speaker in the wake of the GOPs loss of seats in the 1998 election Boehner’s leadership post was challenged by J.C. Watts, the only black Republican congressman. Boehner lost to Watts 121-93.

…According to the Washington Post “From illegal immigration to sanctions on China to an overhaul of the pension system, Boehner, as chairman of the House Committee on Education and the Workforce, took ardently pro-business positions that were contrary to those of many in his party. Religious conservatives — examining his voting record — see him as a policymaker driven by small-government economic concerns, not theirs….. [He opposes] a tough illegal immigration bill that passed in December [2005] with overwhelming Republican support over Boehner’s opposition. One provision in the bill would mandate that every business verify the legality of every employee through the federal terrorism watch list and a database of Social Security numbers. For the bill’s authors, the measure is central to choking off illegal immigrants’ employment opportunities. To business groups and Boehner, it is unworkable.” Feb 12, 2006

The professional politicians on both sides of the aisle up on Capitol Hill live in a bubble, totally and purposely oblivious from the wants and needs of the American Voters who gave them their cushy jobs.

Moderate Republicans , like Cryin’ John Boehner, have been a barrier to Republican victory for as long as I can remember. Like Quakers, Establishment Republicans seem to believe that passive resistance and reaching out to their sworn enemies, friends, is the way to defeat those who oppose you.

When Donald J. Trump came down that golden escalator, along with his beautiful wife Melania, a loud thunderclap could be heard emanating from Capitol Hill and Democrat and Republican Headquarters in Washington, D.C.

That sound was the sound of the sphincters of all the “Keepers of the Washington Status Quo” slamming shut in unison.

You see, boys and girls, the Vichy Republicans in Washington had made a lot of money being “buds” (i.e. servants) with the Democrats.

Of course, they never won Presidential Elections, but, why should they care?

They were getting filthy rich from all of the stock tips and other perks which came from “reaching across the aisle”.

They knew that Trump was going to change all of that.

He was not coming to Washington to make money. In fact, he was not even going to take a salary.

He could not be bought.

And, by the way, that is just one of the reasons that Cryin’ John Boehner, Paul Ryan, Mitch McConnell, and the rest of the Never-Trumpers among the Republican Elite hate our Former President so much.

He refused to take their money and play their games.

He would rather hold a MAGA Rally and speak directly to thousands of average Americans, that to attend some political soiree full of the Washington Elite.

Cruz is right, Boehner is a long-time member of the Washington Political Elite, better known as The Swamp.

All of those Republicans, who are still on Capitol Hill, and who worked against Former President Trump during his tenure in office and who still stand against him to this day, needed to be voted out of office in the 2020 Midterm Elections.

Perhaps then, American Voters will have placed in office Republican Representatives and Senators who actually want to work for and serve US…instead of themselves.