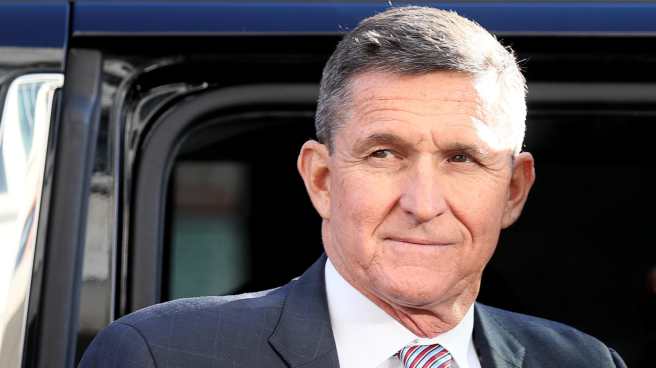 Why did the FBI sit on this exculpatory evidence for years while Flynn’s life was ruined, forcing him to spend millions in legal fees?

Explosive new internal FBI documents unsealed Wednesday show that top bureau officials discussed their motivations for interviewing then-national security adviser Michael Flynn in the White House in January 2017 — and openly questioned if their “goal” was “to get him to lie, so we can prosecute him or get him fired.”

The handwritten notes — written by the FBI’s former head of counterintelligence Bill Priestap after a meeting with then-FBI Director James Comey and then-FBI Deputy Director Andrew McCabe, Fox News is told — further suggested that agents planned in the alternative to get Flynn “to admit to breaking the Logan Act.”

The Logan Act is an obscure statute that has never been used in a criminal prosecution; enacted in 1799 in an era before telephones, it was intended to prevent individuals from falsely claiming to represent the United States government abroad.

“What is our goal?” one of the notes read. “Truth/Admission or to get him to lie, so we can prosecute him or get him fired?”

“If we get him to admit to breaking the Logan Act, give facts to DOJ + have them decide,” another note read. Constitutional law professor Jonathan Turley called the document’s implications “chilling.”

The memo appears to weigh the pros and cons of pursuing those different paths. “I don’t see how getting someone to admit their wrongdoing is going easy on him,” one note reads. Flynn did not ultimately admit to wrongdoing in the interview.

The document indicates that the White House was monitoring the situation: “If we’re seen as playing games, WH will be furious.”

The bombshell materials strongly suggested the agents weren’t truly concerned about Flynn’s intercepted contacts with then-Russian Ambassador Sergey Kislyak during the presidential transition period, except as a pretext. Former President Obama personally had warned the Trump administration against hiring Flynn, and made clear he was “not a fan,” according to multiple officials. Obama fired Flynn as head of the Defense Intelligence Agency in 2014.

The Justice Department turned over the documents just this week, even though a February 2018 standing order in the case from United States District Court for the District of Columbia Emmet Sullivan required the government to turn over any exculpatory materials in its possession that pertained to Flynn. Such materials ordinarily do not need to be disclosed to uncharged individuals or those who have already pleaded guilty, Sullivan has ruled.

Fox News is told even more exculpatory documents are forthcoming, as Attorney General Bill Barr continues to oversee the DOJ’s investigation into the handling of the Flynn case.

Flynn previously charged that top FBI officials, including McCabe, pressed him not to have the White House counsel present during the questioning with two agents that led to his guilty plea on a single charge of lying to federal authorities. Flynn was not ultimately charged with any Logan Act violation.

One of Flynn’s interviewing agents was Peter Strzok, who has since been fired from the bureau after his anti-Trump text messages came to light.

Flynn has sought to withdraw his guilty plea and has been seeking exoneration, saying the FBI engaged in “egregious misconduct.” Flynn, who has said more recently that he did not lie to the FBI, pleaded guilty in late 2017 as mounting legal fees pushed him to sell his home.

Flynn has since obtained new counsel — and his old attorneys, it emerged this week, then failed to turn over thousands of documents to his new lawyer, Sidney Powell. Powell has maintained that Flynn’s old lawyers at Covington & Burling had conflicts of interest and were otherwise ineffective, including by not focusing on Strzok’s evident bias.

“Covington & Burling”…where do I know that law firm from? Oh, yeah…I remember.

Back on March 5, 2012, I posted an article which contained the following pertinent information which you may find interesting.

U.S. Attorney General Eric Holder and Lanny Breuer, head of the Justice Department’s criminal division, were partners for years at a Washington law firm that represented a Who’s Who of big banks and other companies at the center of alleged foreclosure fraud…

…The firm, Covington & Burling, is one of Washington’s biggest white shoe law firms. Law professors and other federal ethics experts said that federal conflict of interest rules required Holder and Breuer to recuse themselves from any Justice Department decisions relating to law firm clients they personally had done work for.

Both the Justice Department and Covington declined to say if either official had personally worked on matters for the big mortgage industry clients. Justice Department spokeswoman Tracy Schmaler said Holder and Breuer had complied fully with conflict of interest regulations, but she declined to say if they had recused themselves from any matters related to the former clients.

Given these facts, I do not think that it would be beyond the realm of possibility that General Flynn’s original lawyers may not have had his best interests at heart.

So, Boys and Girls…here’s the Million Dollar Question: What weasel put these Professional Bureaucrats, who had been in their positions in the previous Administration, up to sabotaging the 45th President of the United States of America from within his Administration by framing National Security Adviser Michael Flynn?

I’ve got three words for ya: Barack Hussein Obama

Faced with the reality of a splintered Democratic Party, which has alienated its base by moving to the Extreme Far Left of the Political Spectrum, this Former President , while still in office, decided to spy on the one candidate who might actually have a chance to beat his own party’s lousy candidate in a fair Presidential Election, through the means of “weaponizing” the FBI and turning it into a “Political Hit Squad”, making the days of J. Edgar Hoover’s political shenanigans seem mild in comparison.

After all that political chicanery failed and the Citizen Statesman became the President, the Former Petulant President Pantywaist encouraged “rebellion”, as if the reality of a nation being torn asunder was some sort of “Star Wars” Movie, through the use of his “benefactor’s”(the Former Nazi Sympathizer) money in the funding of manufactured protests and a Media-Driven, Community -Organizing Assault, which includes the Former President’s own “Organizing For America” Website, which has taken the cheesy name of “The Resistance”.

Meanwhile, the professional bureaucrats within the Department of Justice and the Federal Bureau of Investigation continued to carry out the mission which their former boss, whom they were still loyal to, had given them: to take down Donald J. Trump by any means necessary.

Then, the indictments of the Deep State Operatives and those who gave them their orders need to be handed down as soon as possible.