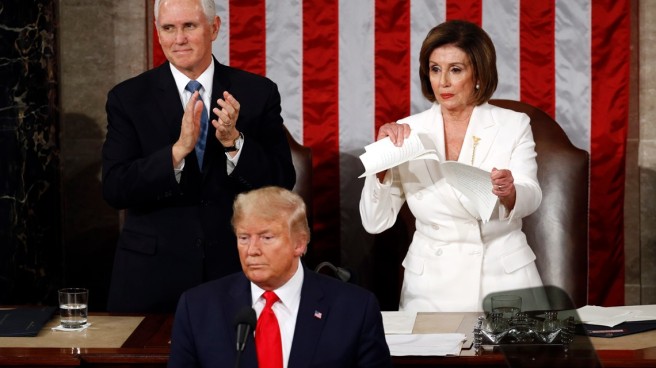 The extraordinary pettiness exhibited by @SpeakerPelosi tonight, ending w her tearing up a copy of the president's speech, is behavior of a woman broken, defeated and small. What an awful and ignominious collapse for her.

President Trump went on the offensive against socialism and left-wing policies during his third State of the Union address to Congress Tuesday night, arguing that Democrats “want to take away your health care, take away your doctor, and abolish private insurance entirely,” while creating a “lure” for illegal immigration.

All but ignoring the historic impeachment drama that flanks this year’s address, Trump opted instead to publicly challenge Democrats on policy grounds while touting what he called the “blue-collar boom” in the country. The tensions over impeachment appeared to surface, however, as the president seemingly snubbed a handshake offer from House Speaker Nancy Pelosi, D-Calif., while Republican lawmakers chanted, “Four more years!”

Then, at the speech’s conclusion, Pelosi dramatically ripped up her copy of Trump’s speech on-camera.

The night was full of other dramatic, made-for-TV moments: Trump introduced a warfighter back from deployment to his shocked wife (which was not included in prepared remarks of the speech delivered in advance to reporters); awarded radio host Rush Limbaugh the Presidential Medal of Freedom on the spot; issued an academic scholarship to a needy family; and introduced a surviving member of the Tuskegee Airmen.

“As we work to improve Americans’ healthcare, there are those who want to take away your health care, take away your doctor, and abolish private insurance entirely,” Trump said. “One hundred thirty-two lawmakers in this room have endorsed legislation to impose a socialist takeover of our healthcare system, wiping out the private health insurance plans of 180 million Americans. To those watching at home tonight, I want you to know: We will never let socialism destroy American health care.”

He added: “Over 130 legislators in this chamber have endorsed legislation that would bankrupt our Nation by providing free taxpayer-funded healthcare to millions of illegal aliens, forcing taxpayers to subsidize free care for anyone in the world who unlawfully crosses our borders. These proposals would raid the Medicare benefits our seniors depend on, while acting as a powerful lure for illegal immigration.

Pelosi appeared to mouth “not true” as Trump said Democrats would pay illegal immigrants’ health care — although virtually all Democratic presidential contenders indicated they would support such a measure during a recent debate.

“This is what is happening in California and other States — their systems are totally out of control, costing taxpayers vast and unaffordable amounts of money,” Trump continued. “If forcing American taxpayers to provide unlimited free healthcare to illegal aliens sounds fair to you, then stand with the radical left. But if you believe that we should defend American patients and American seniors, then stand with me and pass legislation to prohibit free Government healthcare for illegal aliens!”

The address comes one day before the Senate is slated to deliver its verdict in the impeachment trial that has divided the nation. Trump is widely expected to win acquittal. But he did not mention those proceedings directly in his speech.

Drawing some audible murmurs of disapproval from Democrats in the chamber, Trump repeatedly took aim at the Obama administration’s economic and foreign policies.

As he did during the 2019 State of the Union, Trump again directly condemned socialism — and introduced a high-profile guest from embattled Venezuela.

“Joining us in the gallery is the true and legitimate President of Venezuela, Juan Guaidó,” Trump said. “Mr. President, please take this message back to your homeland. All Americans are united with the Venezuelan people in their righteous struggle for freedom! Socialism destroys nations. But always remember, freedom unifies the soul.”

“Tragically, there are many cities in America where radical politicians have chosen to provide sanctuary for these criminal illegal aliens,” Trump said. “In Sanctuary Cities, local officials order police to release dangerous criminal aliens to prey upon the public, instead of handing them over to ICE to be safely removed. Just 29 days ago, a criminal alien freed by the Sanctuary City of New York was charged with the brutal rape and murder of a 92-year-old woman. The killer had been previously arrested for assault, but under New York’s sanctuary policies, he was set free. If the city had honored ICE’s detainer request, his victim would be alive today. The State of California passed an outrageous law declaring their whole State to be a sanctuary for criminal illegal immigrants — with catastrophic results.”

“The state of our union is stronger than ever before,’ Trump declared early on to applause, as most Democrats — including those who have recently sought to have the president removed from office — remained seated, stone-faced and apparently dejected.

What Americans witnessed last night was the behavior of a bunch of political elitists who have placed self-aggrandizement and the love of a failed political philosophy (Marxism) above love of country and their duty as elected representatives in a Constitutional Republic.

The behavior of the Democrats was exemplified by the Speaker of the House, Nancy Pelosi and her attitude toward President Trump.

She actually expected him to shake her cold clammy hand after she has spent the first three years of his administration trying to unseat him from office.

I would not have shook her hand, either.

The president went on to deliver a wonderful State of the Union Address which included several highlights, not the least of which was a surprised Rush Limbaugh being awarded the Presidential Medal of Freedom, the highest award that any civilian can receive.

In my humble opinion, it was well-deserved.

Over the last three years the Democrats’ have more than justified the opinion of them which is held by the average Americans between the coasts whom Hillary referred to as “Deplorables”.

Their behavior has reached a crescendo with their antics in the Senate Impeachment Trial, the Iowa Caucus, and now, the SOTU Address.

Average Americans will not forget their lies, nor will they forget the image of Nancy Pelosi, waiting until she was certain that the camera was on her and then tearing up her copy of the address.

Speaker Pelosi meant it as an act of defiance.

Americans will see it for what it was: a petulant act by a professional politician whose plans to overturn the will of the American people failed spectacularly, leaving her and her fellow Far Left Democrat Politicians in a hole from which they may never crawl out of.