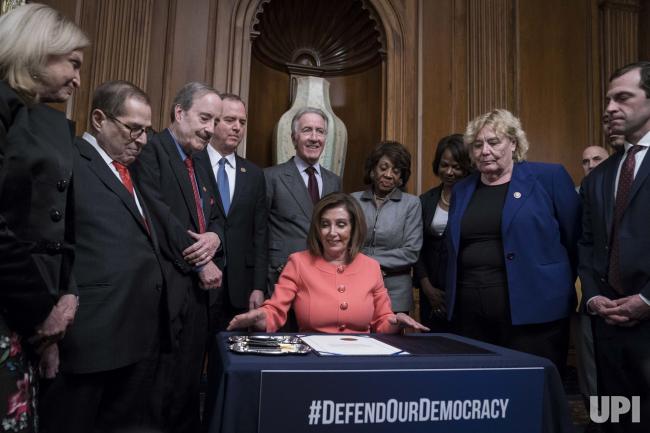 The framers built the Senate to break these kinds of partisan fevers. To stabilize our institutions and protect our country. To stop short-term passions from destroying our long-term future. That is the Senate's duty. That is what we must do when this trial begins.

House Speaker Nancy Pelosi, D-Calif., put her signature on the articles of impeachment brought against President Trump on Wednesday – setting up the trial that places the fate of Trump’s presidency in the hands of the Senate.

Pelosi, who signed the articles during an engrossment ceremony on Capitol Hill, criticized Trump’s actions, which she had jeopardized national security and violated his oath of office.

“So sad, so tragic for our country,” she said.

Pelosi added: “As we make history, we will be making progress for the American people. … Make it be very clear that this president will be held accountable and that no one is above the law.”

After Pelosi signed the articles of impeachment, she handed out the pens she used to the House managers and posed for photos with them.

Following the pomp and protocol of the engrossment ceremony, Clerk of the House Cheryl Johnson brought a note to the Senate floor notifying the upper chamber of Congress that Pelosi had signed the articles of impeachment and appointed the managers for the House.

House Majority Leader Mitch McConnell, R-Ky., said that the Senate will meet with the House managers at noon on Thursday to officially receive the articles of impeachment.

Wednesday’s mostly partly-line House vote to deliver the charges was 228-193, reflecting the deeply divided nation at the start of this presidential election year. It came one month after the House impeached Trump alleging he abused his presidential power by pressuring Ukraine to investigate Democratic rival Joe Biden, using military aid to the country as leverage. Trump was also charged with obstructing Congress’ ensuing probe.

The Senate will transform itself into an impeachment court on Thursday. The Constitution calls on Chief Justice John Roberts to preside at the trial, administering the oath to senators who will serve as jurors and swear to deliver “impartial justice.” Opening arguments are to begin next Tuesday after the Martin Luther King Jr. holiday.

The president’s team expects acquittal, with a Senate trial lasting no more than two weeks, according to senior administration officials unauthorized to discuss the matter and granted anonymity. That’s far shorter than the last presidential impeachment trial, of Bill Clinton, in 1999, or the first one, of Andrew Johnson, in 1868.

McConnell has said he prefers to model Trump’s trial partly on the process used for Clinton’s impeachment trial in 1999. It, too, contained motions for dismissal or calling new witnesses.

McConnell is hesitant to call new witnesses who would prolong the trial and put vulnerable senators who are up for reelection in 2020 in a bind with tough choices. At the same time, he wants to give those same senators ample room to show voters they are listening.

That earthquake which everyone felt across the country yesterday was our Founding Fathers rolling over in their graves.

For the first time in our nation’s history, our Legislative Branch is about to have a Senate “Trial” over Articles of Impeachment being brought against a President who is accomplishing every Campaign Promise he made, who is packing arenas from coast to coast when he speaks to average Americans, and who just eliminated an enemy of America who was directly responsible for killing over 600 of our Brightest and Best and had plans for more Islamic Terrorist Attacks.

Why is the 45th President of the United States of America being Impeached?

Because he, as a Washington Outsider, won the 2016 Presidential Election, spoiling the Far Left Democratic Party’s dream of making America a Democratic Socialist (i.e., Marxist) country.

The Democrats’ plan to impeach Donald J. Trump began on Election Night 2016, as they swore through their tears to somehow, someway, remove him from the office, which was “rightfully” their destiny.

Their problem was that even after spying on his campaign, they had no actual dirt against him.

So, they decided to dream up the Russian Collusion Fairy Tale, a lie which the Democrats spent billions of our money trying to “prove” to be reality.

That plan failed, as the Special Counsel, a doddering old man whom they chose as a figurehead to mask their dirty work, found that there was no collusion, no obstruction, no anything.

And now, after House Democrats held secret hearings in the basement of the Capitol Building, locking House Republicans out and limiting their participation, Americans will witness today the formal handing over their sacred “Articles of Impeachment” which are not even impeachable offenses, rising nowhere near the requirement of “high crimes and misdemeanors”.

Our Founders meant for Impeachment to be a partisan remedy for defending the nation from a President who had willingly committed a high crime or misdemeanor which severely damaged our Sovereign Nation.

The Democrats have turned the process of Impeachment a President into a Partisan Panacea to placate the hurt feelings of their Social Justice Warriors or, as I have named them, the Wokesheviks, while attempting to get President Trump out of their way so that they may win the Presidency in the 2020 Election.

In other words, if you can’t beat him, impeach him.

Thank God that it appears that the Senate is not going to let the House Democrats have their way.

Out here in Realityville, my fellow average Americans, otherwise known as “Deplorables”, have had their fill of Nancy Pelosi, Adam Schiff, Jerry Nadler, the Squad, and the rest of the cast of this remake of “One Flew Over the Cuckoo’s Nest”.

They are enjoying a prosperous America.

And, they have no intention of giving it back to the Democrats.

Once President Trump is acquitted, Nancy and company are going to be the ones answering for THEIR actions…on November 3, 2020.