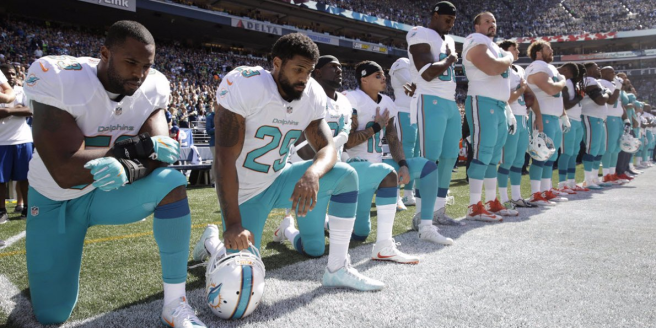 Please allow me to make a confession. It has been quite a few years since I was a serious NFL or NBA Fan. I’ve kept up from afar, just so I could engage in Water Cooler Talk at work. However, I enjoy college football and basketball nowadays infinitely more than I do the professional product.

I suppose that it is because of my rather youthful age of 58 and having grown up during some of the greatest times in professional sports history, during which I was able to watch the incredible Undefeated Miami Dolphins, Pittsburgh Steelers, and Dallas Cowboys make the 1970s an NFL Fan’s dream.

I am also a lifelong St. Louis Cardinals Fan, and, as an alumni, my heart beats University of Memphis Tiger Blue.

As a average American, living here in the Heartland, I still believe in Traditional American Values, such as Faith, Hard Work, Loyalty, Gratitude, and Respect.

The recent actions and words being seen and heard coming from the outrageously-paid professional athletes of the NFL and the NBA, are not the words and actions of “professionals”. Rather, they are the whining, screaming, and lashing out of cry-baby millionaires, who neither respect their fan base, nor those who have made their path to fame and fortune possible through the shedding of their blood for the flag and country which they are so intent on insulting and diminishing.

And now, their displays of arrogance and ingratitude are not just being manifested by refusing to honor the sacrifices made for them by brave men and women who died in service to the flag that they are insulting by kneeling during our National Anthem, now these Special Snowflakes are refusing to meet with our nation’s President, simply because the fact that he is our president OFFENDS them.

By “us”, I am referring to average Americans just like me, who are out here killing ourselves in our 40-plus hour a week jobs, just to make it from paycheck-to-paycheck, including those of us who actually still attend your games, shell out our hard-earned cash, just to see you disrespect our country and, at times, sleepwalk your way through games on your way to collect your millions.

You misanthropic ungrateful jackanapes are not worthy to lace up the cleats and tennis shoes of those who have gone before you in your chosen field of athletic endeavor.

Those American Athletes knew whom they were playing for and who paid their salaries. And, they also had the sense to honor the country in which they were able to have the freedom to have the job that they wanted and be paid handsomely for it. They also had the home-training and grace to go to the White House and meet the sitting president, if they were lucky enough to be a part of a team which won their league’s championship.

So, Colin, Steff, LeBron, and the rest of you “disenfranchised” millionaires…

Pride goeth before destruction, and an haughty spirit before a fall. – Proverbs 16:18 (KJV)

Perhaps Peyton Manning can get you a job with Papa John’s Pizza…delivering.