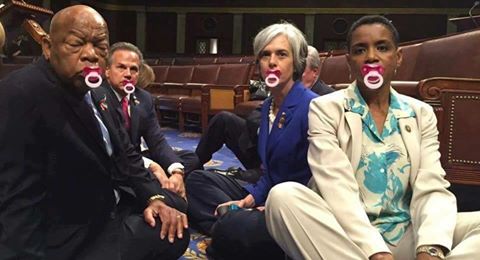 “There are those in America today who have come to depend absolutely on government for their security. And when government fails they seek to rectify that failure in the form of granting government more power. So, as government has failed to control crime and violence with the means given it by the Constitution, they seek to give it more power at the expense of the Constitution. But in doing so, in their willingness to give up their arms in the name of safety, they are really giving up their protection from what has always been the chief source of despotism — government.” – Ronald Wilson Reagan

The New York Times reports that

A Democratic protest demanding votes on gun-control legislation led to pandemonium in the House chamber that did not end until early Thursday, when Speaker Paul D. Ryan and his fellow Republicans reclaimed control long enough to force through a major spending bill. They then abruptly adjourned and left the Capitol.

Furious Democrats remained on the House floor, where they huddled around their leader, Representative Nancy Pelosi of California, who praised their stand as a “discussion heard around the world.”

Ms. Pelosi expressed bewilderment at the Republican position. “What could they be thinking?” she asked. “Whatever it is, they don’t want to tell anybody about it. That’s why they left in the dead of night.”

The standoff, which began with a Democratic sit-in on the House floor just before noon on Wednesday, did not end until about 3 a.m. Thursday when Mr. Ryan — barreling over Democrats’ objections — took the rare and provocative step of calling a vote on a major appropriations bill in the wee hours and without any debate. He then adjourned the House, with no legislative votes scheduled until July 5.

The House approved the bill, which includes $1.1 billion in emergency financing to fight the mosquito-borne Zika virus — and more than $80 billion in other government spending — by a vote of 239 to 171 shortly after 3 a.m.

Republicans dashed from the chamber into the sticky heat gripping Washington and were met by protesters who jeered, with some shouting, “Do your job!”

Earlier, as Democrats fought for control of the floor, they pressed against the speaker’s dais, waving signs with the names of gun victims and chanting “No bill! No break!” as Mr. Ryan repeatedly banged his gavel in an attempt to restore order.

There were scenes of chaos across the floor as Republicans tried to resume regular business. At one point, Democrats began singing “We Shall Overcome” — altering the lyrics to say “We shall pass a bill some day” — as Republicans shouted in outrage.

And when Representative Don Young, Republican of Alaska, tried to confront the chanting Democrats, he was restrained by aides and colleagues.

The unusual events were set off with the sit-in before noon when Democrats insisted on taking votes on gun measures before Congress began its weeklong recess for the Fourth of July.

“We will not leave the floor of this House until this Congress takes action!” Representative Kathy D. Castor, Democrat of Florida, declared.

Democrats — who do not have enough strength in either the House or Senate to pass legislation on their own — have resorted to spectacle to highlight their anger over Congress not taking action to tighten the nation’s gun-control law.

Why are the House Democrats doing this?

Are they having some sort of LSD flashback to their Collegiate days, during which they barricaded the college Dean’s office and smoked dope?

Perhaps, they believe that if they sit long enough John Lennon and George Harrison will rise from their graves and the Beatles will show up and lead them in a rousing chorus of “All We Are Saying is Give Peace a Chance.”

More than likely, they believe that the spineless Republican Elite will cave in to their demands simply because they are throwing an adult temper tantrum.

As I have been reading on Facebook Political Pages, these Congressional Democrats , including their presumptive presidential candidate Hillary Clinton and those who have donned brown shirts and who are in lockstep with them, erroneously believe that Americans want their 2nd Amendment rights taken away from them or somehow modified, as a feel-good measure that will do nothing to prevent Radical Islamists from slaughtering us.

The Americans whom I see carrying their pistols strapped to their hip in Walmart down here in Mississippi, where Open Carry is legal, would fervently disagree with them.

The Second Amendment to the United States Constitution does not just apply to the Bodyguards of Modern American Liberals.

If some of those Americans in Orlando at that night club in which Omar Mateen murdered 49 of them and wounded 53 others, had been carrying, his planned slaughter would have been stopped very quickly.

Perhaps, even before it began.

This unseemly adult temper tantrum that the house Democrats are throwing is not one of sympathy for the American people. They could care less what we think.

These are the same people that smile like Chessshire Cats when they think about the yanking of over a million American babies a year out of their mothers wombs.

No, boys and girls, this is all about illusion and control.

Democrats know that Donald J. Trump is about to win the presidency in November in a political landslide.

This demonstration is an illusion created to attempt to convince the American people that the majority of us are for restricting our 2nd Amendment rights for the express purpose of eventually taking away our guns and our means to defend ourselves from enemies foreign and domestic.

Unfortunately, for these overage immature hippies in the House of Representatives, they are fooling no one.

The overwhelming majority Americans have no wish to be defenseless.

Those of us who have learned from history remember the words of Marxist Revolutionary Vladimir Lenin:

We, like our Founding Fathers, have no wish to be “controlled”.

One thought on ““Sit-In For Gun Control”: House Democrats Throw a Temper Tantrum”