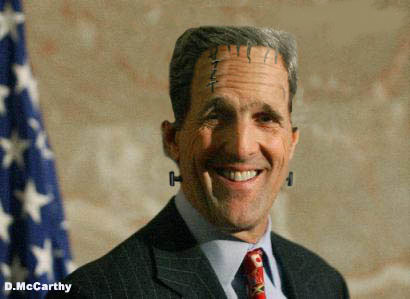 Secretary of State John Kerry said Monday evening there was “zero evidence” that refugee applicants who go through the rigorous screening involved in the U.S. refugee admission program pose a greater security threat than members of any other group.Speaking at the interfaith iftar (Ramadan fast-breaking meal) in Sterling, Va. coinciding with World Refugee Day, Kerry also warned that what he called “bigoted and hateful rhetoric” about Muslims helps those “who propagate the lie that America is at war with Islam.”

“There is absolutely no evidence, my friends, zero evidence, that refugees who make it through this arduous process, pose any greater threat to our society than the members of any other group,” he said. “And it is important for people to know that.”

Alluding to calls by some Republican politicians to bar Muslim refugee applicants, Kerry said blocking any group on the basis of religion, race or nationality went against Americans ideals.

“We believe in individual rights, not collective guilt. And we believe in judging people based on what they do, not the circumstances of their birth or their choice of sacred texts,” Kerry added.

“We need to remember,” he continued, “that bigoted and hateful rhetoric towards Muslims plays right into the hands of the terrorist recruiters who propagate the lie – it plays into the hands of people who propagate the lie that America is at war with Islam, when in fact there is no country on earth where Muslims enjoy more freedom than in the United States of America.”

After Kerry’s remarks at the All Dulles Area Muslim Society (ADAMS) center, a member the community and the U.S. Army National Guard, Ali Khwaja, offered the Islamic call to prayer before the day’s fast was broken.

“We need to remember,” he continued, “that bigoted and hateful rhetoric towards Muslims plays right into the hands of the terrorist recruiters who propagate the lie – it plays into the hands of people who propagate the lie that America is at war with Islam, when in fact there is no country on earth where Muslims enjoy more freedom than in the United States of America.”

In his comments Kerry did not address the issue, raised by some Republicans and the subject of proposed legislation, of prioritizing in refugee admissions minorities that have been specifically targeted by Islamic extremists in the Syria and Iraq conflicts – and which Kerry himself has determined are the victims of genocide.

As of Monday, the federal government had admitted 4,464 Syrian refugees so far this fiscal year, of whom just 17 (0.3 percent) are Christians, 10 (0.2 percent) are Yazidis, and one each are defined in  State Department Refugee Processing Center data as “no religion” and “other religion.”

With regard to Kerry’s comments about the relative threat posed by refugees, State Department spokesman John Kirby said last November that of 785,000 refugees from all countries admitted to the U.S. since 9/11, “only about a dozen have been arrested or removed from the United States due to terrorism concerns that existed prior to their resettlement in the United States.”

None of them were Syrian, he added.

A State Department factsheet last December said that Syrian refugees admitted to the U.S. since the beginning of FY2011 had been able to do so “only after the most extensive level of security screening of any category of traveler to the United States. None have been arrested or removed on terrorism charges.”

In January, two Iraqi-born Palestinian refugees in the U.S. were indicted on terror-related charges.

Omar Faraj Saeed al-Hardan of Houston, Texas, was charged with attempting to provide material support to ISIS, procuring citizenship or naturalization unlawfully, and making false statements. He was admitted into the U.S. as a refugee in 2009.

Aws Mohammed Younis Al-Jayab, of Sacramento, Calif., was accused of traveling to Syria to fight alongside terrorist groups, and was also charged with lying to the government about his travels. He arrived in the U.S. as a refugee in 2012.

These “Syrian Refugees” have already caused mass chaos in Europe, pushing the European Union to the brink of implosion.

When the “Refugees” began their invasion of Europe, Ben Shapiro, writing for Breitbart News, asked and answered that important question…

Who Are These Refugees? That competition to accept refugees would be fine if we knew that the refugees plan on assimilating into Western notions of civilized society, and if we knew that they were indeed victims of radical Muslim atrocities. Unfortunately, we know neither. It is deeply suspicious that major Muslim countries that do not border Syria refuse to take in large numbers of refugees, except for Algeria and Egypt.

Turkey has taken in nearly two million refugees, according to the United Nations, and keeps the vast majority in refugee camps — a typical practice in a region that has kept Arab refugees from the 1948 war of Israeli independence in Arab-run camps for seven decades. Jordan, Lebanon and Iraq have taken in hundreds of thousands of refugees as well, but all border the chaotic, collapsing Syria, and thus have limited choice in the matter. Iran has taken in no refugees. Neither have Pakistan, Indonesia, or any of the other dozens of member states of the Organization of Islamic Cooperation. Saudi Arabia, the United Arab Emirates, Qatar, Kuwait and Bahrain all refused to take any refugees, and explicitly cited the risk of terrorists among the refugees, according to The Guardian (UK).

These fears are not without merit, as even Obama administration officials have acknowledged: back in February, director of the National Counterterrorism Center Nicholas Rasmussen called Syrian refugees “clearly a population of concern.” FBI Assistant Director Michael Steinbach explained, “Databases don’t [have] the information on those individuals, and that’s the concern. On Tuesday, State Department spokesman John Kirby told CNN’s Wolf Blitzer that terrorist infiltration was “a possibility. I mean, you can’t, you can’t dismiss that out of hand.” He then added, “Obviously, if you look at those images though, it’s pretty clear that the great majority of these people are innocent families.”

Actually, images show a disproportionate number of young males in crowds of refugees. And those images reflect statistical reality: according to the United Nations Human Rights Commission, Mediterranean Sea refugees are overwhelmingly male: just 13 percent are women, and just 15 percent are children. The other 72 percent are men. Compare that population to the refugees in the Middle East from the same conflicts: 49.5 percent male, and 50.5 percent female, with 38.5 percent under the age of 12. Those are wildly different populations.

It was also reported that these “refugees” left a trail of waste, human and otherwise, in their wake.

In other words, these guys believe that hygiene is a girl that they used to “date” back home.

It appears that we have a lot to look forward to.

As I have asked before: Why are the other Middle Eastern Countries not taking them in?

What do they know that we and the Europeans don’t?

I can answer those questions in “three little words” ( to quote Crazy Uncle Joe Biden): “hijrah” and “taqujiyya”.

“Hijrah” refers to the undertaking of a pilgrimage to spread Islam to the World, such as undertaken by Mohammed between Mecca and Medina in 62 A.D., which is referred to as “The Start of the Muslim Era”.

“Taquiyya” is the Muslim Practice of purposeful lying to us “Infidels” in order to further the cause of Islam.

And, another thing in regards to the so-called Syrian “Refugees”, the overwhelming majority of which are military-looking ultra-fit men with cell phones…

I am sick of how Liberals, like Obama, all of the sudden have such an interest in the Bible and what Christ has to say in a feeble attempt at trying to use the faith of three quarters of Americans to prove their political point.

Hey Liberals, when you’re yanking a baby’s head out from their mothers womb with a pair of tongs, do you give a rat’s butt about the God of Abraham and the tenets of Christianity, then?

Wherefore by their fruits ye shall know them. – Matthew 7:20

America is a Nation of Laws, a Constitutional Republic forged from the sacrifices of men and women who loved Liberty and American Freedom more than life itself.

That’s who WE are.

If once you forfeit the confidence of your fellow-citizens, you can never regain their respect and esteem.

That is the situation that you, your boss, and his entire Administration find yourselves in today, Secretary Kerry.

Judging by the past actions of you and your boss, including the clandestine dissemination of the “youths” from Central and South America, who arrived here, parentless, last year, throughout our country, we “average Americans”, do not trust you and your people, when you say that you will “vet” these Syrian “Refugees”.

Especially, since the overwhelming majority of them are well-fit young men with cell phones, who look like soldiers.

And, that is why we and our states’ Governors’ continue to oppose your plans to disseminate these Syrian “Refugees” among us.

And now, you wonder why the majority of Americans oppose your boss’ plans to bring in more “Refugees” at every turn, despite your assurances that these largely un-vetted Islamists are “safe”?

It’s a matter of SURVIVAL.