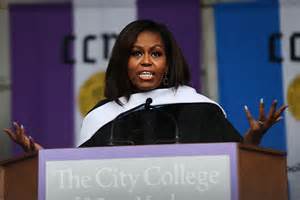 We don’t like being pushed outside of our comfort zones. You know it right here on this campus. You know people sitting at different tables, y’all living in different dorms. I was there. Y’all not talking to each another, taking advantage of the fact that you’re in this diverse community because sometimes it’s easier to hold onto your own stereotypes and misconceptions, it makes you feel justified in your ignorance. That’s America. So the challenge for us is, are we ready for change? – Michelle Obama, January 23rd, 2008, Columbia, South Carolina

Filed under the category of “Well, At Least She’s Consistent”…

The NBC Affiliate in New York City reports that

Michelle Obama praised the diverse graduates of the city’s oldest public institution of higher learning and took a mild swipe at Donald Trump as she delivered the last commencement address of her tenure as U.S. first lady on Friday.

“I really want you all to know that there is a reason why, of all of the colleges and universities in this country, I chose this particular school in this particular city for this special moment,” Obama told the graduates of the City College of New York.

Noting that students at the 169-year-old college come from 150 countries and speak more than 100 languages, she said, “You represent just about every possible background – every color and culture, every faith and walk of life.”

Obama, the wife of Democratic President Barack Obama, told the graduates that “with your glorious diversity, with your remarkable accomplishments and your deep commitment to your communities, you all embody the very purpose of this school’s founding.”

She made a thinly veiled reference to Trump, the presumptive Republican presidential nominee, by saying “some folks” don’t value the diversity that City College embodies.

“They seem to view our diversity as a threat to be contained rather than as a resource to be tapped,” Obama said. “They tell us to be afraid of those who are different, to be suspicious of those with whom we disagree.

“They act as if name-calling is an acceptable substitute for thoughtful debate, as if anger and intolerance should be our default state rather than the optimism and openness that have always been the engine of our progress.”

Trump has promised to build a wall between the United States and Mexico, proposed banning Muslims from entering the U.S. and said it’s risky to take in Syrian refugees because terrorists could be among them.

Obama added that “here in America, we don’t give in to our fears. We don’t build up walls to keep people out because we know that our greatness has always depended on contributions from people who were born elsewhere but sought out this country and made it their home.”

City College, founded as the Free Academy of the City of New York in 1847, gained a reputation as the poor man’s Harvard in the 1930s, when it educated a generation of Jewish intellectuals who were shut out of elite private colleges.

In this case, by erroneously claiming that the reason Donald J. Trump’s. along with the majority of Americans’, desire to secure our Southern Border, is because we have a fear of people who look different from us.

If that were the case, American would have never become the “Great American Melting Pot”, as the old cartoon from Scholastic Rock, that we used to watch as kids on Saturday Mornings on ABC, so aptly explained.

And, “The Donald” would have an all-white workforce in his companies.

This country was built by LEGAL IMMIGRANTS of all Ethic Backgrounds, who assimilated into our culture and became AMERICANS, who were loyal to their now-found country, not the country that they left behind to come here for a better life.

“Mooch” is purposefully assigning a “nobility” and “righteousness” to those who would enter this country illegally, to take American Jobs , while remaining loyal to their country of origin and to those who are entering illegally for the purpose of destroying our nation through the mindless violence of Islamic Terrorism.

Michelle Obama does not speak for the overwhelming majority of Americans.

Most of the other First Ladies in my 56 years have brought a certain degree of class and decorum to their unelected position as “FLOTUS”.

Her expensive tastes, which include Wagyu Beef and Lobster, her penchant for taking the most expensive vacations ever imagined by man (with larger entourages than an NBA Player), along with her attempts at telling Americans what we HAVE to feed our children and grandchildren, and how we should be raising them, have not exactly endeared herself to the overwhelming majority of Americans.

Quite frankly, all of us out here in the Heartland, think that she stinks on ice.

For Michelle Obama to drop her carefully concealed mask of racial intolerance this late in the game, with still time left in her husband’s presidency, shows how little regard she has, not only for the decorum of her position, but, for the well-being of America and her citizens, both black and white.

It is a shame that we can’t impeach the President’s Spouse.