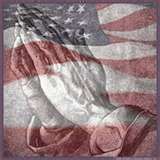 As I sit here on an American Sunday morning, my bride sound asleep, here in the quiet of my stately mansion, presently, a bottom floor two-bedroom apartment on a golf course, I find myself thinking about my niece by marriage:  a 43 year old Christian Wife, Mother, and Prayer Warrior, whose memorial service I held onto my grieving wife through, on Friday Morning, after my niece lost her battle with cancer on Tuesday morning.

You see, all the attendees in that small NW Mississippi sanctuary, knew where she was. She was in the presence our Savior, Jesus Christ.

That got me to thinking, in the past couple of days since, about those individuals whom I run into, both in “real life”. and on the Internet Chat Boards, who constantly want to deny our nation’s Christian Heritage, and who vainly continue to wage a cultural war against Someone Whom they claim not to believe in, in the first place.

I recall an attack I received from a Liberal, who was hanging out on Senator Ted Cruz’s Facebook Page, simply to contribute to the massive effort, by Liberals and the Republican Establishment, to “Palinize” Cruz, a straight-talking Conservative Leader.

This Liberal, or, “Troll”, as one who engages in what he was doing on the Internet  is called, posted numerous quotes, from Thomas Jefferson, John Fitzgerald Kennedy, and anybody else he could think of, in an attempt to prove that America was not founded by Christians, and that our Country’s Founding Documents were not based on Judeo-Christian Principles, so, therefore, Christian Principles  have no place in the governance of the United States of America.

Catching flack for sticking to my Christian American Conservative Principles in nothing new for me.

My posts, concerning American Christianity, seem to “touch a nerve” in both Liberals and Atheists, alike. (But, I repeat myself.)

Their reaction has hardly been unexpected.

Of course, those Liberals and Atheists who responded, over the years, immediately denied that our Founding Fathers were Christians and that our country was founded on a Judeo-Christian belief system.

Evidently, they had never read anything, except what their like-minded, non-believing soothsayers, allowed them to.  Or else, they would have read historical documents like President George Washington’s Thanksgiving Day Proclamation, written on November 1, 1777, and found at wallbuilders.com:

The committee appointed to prepare a recommendation to the several states, to set apart a day of public thanksgiving, brought in a report; which was taken into consideration, and agreed to as follows:

Forasmuch as it is the indispensable duty of all men to adore the superintending providence of Almighty God; to acknowledge with gratitude their obligation to him for benefits received, and to implore such farther blessings as they stand in need of; and it having pleased him in his abundant mercy not only to continue to us the innumerable bounties of his common providence, but also smile upon us in the prosecution of a just and necessary war, for the defense and establishment of our unalienable rights and liberties; particularly in that he hath been pleased in so great a measure to prosper the means used for the support of our troops and to crown our arms with most signal success:

It is therefore recommended to the legislative or executive powers of these United States, to set apart Thursday, the 18th day of December next, for solemn thanksgiving and praise; that with one heart and one voice the good people may express the grateful feelings of their hearts, and consecrate themselves to the service of their divine benefactor; and that together with their sincere acknowledgments and offerings, they may join the penitent confession of their manifold sins, whereby they had forfeited every favor, and their humble and earnest supplication that it may please God, through the merits of Jesus Christ, mercifully to forgive and blot them out of remembrance; that it may please him graciously to afford his blessings on the governments of these states respectively, and prosper the public council of the whole; to inspire our commanders both by land and sea, and all under them, with that wisdom and fortitude which may render them fit instruments, under the providence of Almighty God, to secure for these United States the greatest of all blessings, independence and peace; that it may please him to prosper the trade and manufactures of the people and the labor of the husbandman, that our land may yield its increase; to take schools and seminaries of education, so necessary for cultivating the principles of true liberty, virtue and piety, under his nurturing hand, and to prosper the means of religion for the promotion and enlargement of that kingdom which consisteth in righteousness, peace and joy in the Holy Ghost.

And it is further recommended, that servile labor, and such recreation as, though at other times innocent, may be unbecoming the purpose of this appointment, be omitted on so solemn an occasion.

One of the first reactions to my posts, by the Liberal/Atheist responders continued to deny Jefferson’s Christianity.

Atheists like to bring up the fact that he wrote a version of the Bible which left out Christ’s miracles.  What they are reluctant to do, though, is explain why he wrote his book that way.  David Barton explains on wallbuilders.com:

The reader [of a newspaper article which Barton is replying to], as do many others, claimed that Jefferson omitted all miraculous events of Jesus from his “Bible.” Rarely do those who make this claim let Jefferson speak for himself. Jefferson’s own words explain that his intent for that book was not for it to be a “Bible,” but rather for it to be a primer for the Indians on the teachings of Christ (which is why Jefferson titled that work, “The Life and Morals of Jesus of Nazareth”). What Jefferson did was to take the “red letter” portions of the New Testament and publish these teachings in order to introduce the Indians to Christian morality. And as President of the United States, Jefferson signed a treaty with the Kaskaskia tribe wherein he provided—at the government’s expense—Christian missionaries to the Indians. In fact, Jefferson himself declared, “I am a real Christian, that is to say, a disciple of the doctrines of Jesus.” While many might question this claim, the fact remains that Jefferson called himself a Christian, not a deist.

Finally, the Eight Per Centers who replied to my blogs insisted that Crosses and other Christian symbols have no place in the Public Square.  They wish for Christians to remain unseen and unheard from, worshiping in private.

Well,  y’all can wish for a unicorn to magically appear in your backyard…but that ain’t gonna happen, either.

As a free nation, all you who are non-believers have every right to exercise your faith.

However, as Orthodox Rabbi Daniel Lapin of the Jewish Policy Center clearly explains:

[I] understand that I live . . . in a Christian nation, albeit one where I can follow my faith as long as it doesn’t conflict with the nation’s principles. The same option is open to all Americans and will be available only as long as this nation’s Christian roots are acknowledged and honored.

…Without a vibrant and vital Christianity, America is doomed, and without America, the west is doomed. Which is why I, an Orthodox Jewish rabbi, devoted to Jewish survival, the Torah, and Israel am so terrified of American Christianity caving in. God help Jews if America ever becomes a post-Christian society! Just think of Europe!

Is the Rabbi prophetic? I pray that he isn’t.

I have, however, noticed in the last few years, a propensity among those who have not been raised in a Christian home, to be intolerant toward those who have….starting with the individual who sits at 1600 Pennsylvania Avenue in Washington, DC.

Americans’ Christian Faith, of which 78% of us, according to Gallup, still anchor our lives around, has been the Solid Rock upon which our nation was built. To deny that, is to deny reality, to re-write history, and, to, quite frankly, endanger “the Shining City on a Hill”.

If we ever forget that we are One Nation Under God, then we will be a nation gone under.

As for my niece, I will always love her…and I will see her again.

I thank God for His Blessed Assurance, through his Son, my Savior, Jesus Christ.

One thought on “A Sunday Morning Reflection on God, Family, and Country”