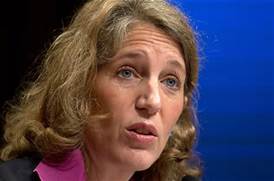 The dots are beginning to connect as to why President Barack Obama chose Professional Bureaucrat Sylvia Burwell to be his new Health and Human Services Secretary.

You just can’t make this stuff up.

President Obama just appointed Sylvia Burwell to take over Obamacare, the disastrous beast under which our entire health care system and 1/6 of our nation’s economy is forever fundamentally transformed.

Remember last year when America’s war memorials, national parks, patriotic amenities, student White House tours, etc. were shut down because the Obama administration’s spending priorities are so out of whack? Americans were told the Federal government didn’t have enough of our tax dollars to allow WWII vets to walk across a public sidewalk to visit a statue honoring these heroes. This, during the “shutdown” when crony capitalism, earmarks, and waste and fraud continued to fill the swamp. This, while the first family continued to live elaborately large and some in Congress had the gall to whine that they aren’t paid enough. This, while the people’s will continued to be arrogantly ignored.

What a cold and callous bureaucrat it was who’d direct that quite revealing fiasco, an episode over which the Obama Administration never recovered in the court of public opinion.

Who would do such a thing? Who would punish patriotic Americans? Who sent the email initiating all this?

It’s Sylvia’s stain on the ash heap of history. And along with Sylvia’s stain comes her disturbing, punitive priorities as she takes over our health care coverage. Yeah, nothing can go wrong with that.

You can’t make this stuff up.

As usual, the Arctic Fox is exactly right. And, as I reported the other day, Sylvia’s resume reads like a Who’s Who of Liberal Democrat Non-Profit Behind-The-Scenes Organizations:

Sylvia Mathews Burwell, President, The Walmart Foundation (Jan. 2012 – April, 2013); President, Global Development Program (Apr. 2006 – Dec. 2011). Ms. Burwell joined the Foundation in 2001 as Executive Vice President and served as its Chief Operating Officer from 2002 to April 2006. Prior to joining the Foundation, she served as Deputy Director of the Office of Management and Budget in Washington, D.C. from 1998. Ms. Burwell served as Deputy Chief of Staff to President Bill Clinton from 1997 to 1998, and was Chief of Staff to Treasury Secretary Robert Rubin from 1995 to 1997. She also served as Staff Director for the National Economic Council from 1993 to 1995. Ms. Burwell was Manager of President Clintons economic transition team. Prior to that, she was an Associate at McKinsey and Company from 1990 through 1992. She is a member of the Board of Directors of the Council on Foreign Relations, a member of the Aspen Strategy Group, the Trilateral Commission and the Nike Foundation Advisory Group, a member of the Board of the Alliance for a Green Revolution in Africa, an Advisory Board member for the Next Generation Initiative and the Peter G. Peterson Foundation, and a member of the Professional Advisory Board for the ALS Evergreen Chapter. Ms. Burwell received a bachelors degree in government, cum laude, from Harvard University in 1987 and a bachelors degree in philosophy, politics and economics from Oxford University, where she was a Rhodes Scholar. Ms. Burwell has been a Director of MetLife and Metropolitan Life Insurance Company since 2004. On April 19, 2013, Ms. Sylvia Mathews Burwell resigned from the Board of Directors of MetLife, Inc., effective as of that date.

And, as I also previously reported, one group in Ms. Burwell’s biography jumped out at me. The Aspen Strategy Group, which is  a part of the Aspen Institute.

Who are they? I’m glad you asked.

According to discoverthenetworks.org, the main things to remember about the Aspen Institute are that the institute

…AI has numerous noteworthy connections to the billionaire philanthropist George Soros. For example, in August 2004 Soros and other wealthy Democrats gathered at the Institute to brainstorm ways in which they could use their fortunes to engineer the defeat of George W. Bush in the upcoming presidential election. That same year, Soros spoke at an AI seminar (which also featured an appearance by Al Gore) titled “America’s Role in the Fight Against Global Poverty.” In 2006 Aspen sponsored a Soros talk where the billionaire promoted his book The Age of Fallibility: Consequences of the War on Terror. Jim Spiegelman, Aspen’s director of communications, formerly worked as a “special assistant” to Soros. And Arjun Gupta, who serves on Aspen’s board of overseers, is a vice president with the Chatterjee Group which advises Soros and the Soros Fund Management Group.

Soros’s Open Society Institute (OSI) has awarded the Aspen Institute numerous large grants over the years, including $50,000 in 2004, another $50,000 in 2005, $195,000 in 2008, and $125,000 in 2009. The latter grant was earmarked for “international human rights and international humanitarian law and their application in American jurisprudence.” In 2011, OSI funded AI’s publication of a report blaming the overrepresentation of blacks and Latinos in U.S. prison populations on “the failure of so many of our society’s institutions.”

Soon after the inauguration of President Barack Obama in 2009, AI developed a close working relationship with the U.S. State Department. Said Secretary of State Hillary Clinton that year: “We can’t imagine a better partner than the Aspen Institute.”

Government health care will not reduce the cost; it will simply refuse to pay the cost. And who will suffer the most when they ration care? The sick, the elderly, and the disabled, of course. The America I know and love is not one in which my parents or my baby with Down Syndrome will have to stand in front of Obama’s “death panel” so his bureaucrats can decide, based on a subjective judgment of their “level of productivity in society,” whether they are worthy of health care. Such a system is downright evil.

If Ms. Burwell could so callously close down our National Parks and Monuments to our heroes, who paid for our freedom with their very blood, is it too much of a stretch to say that she will have no problem administrating who receives life-saving healthcare and who doesn’t?