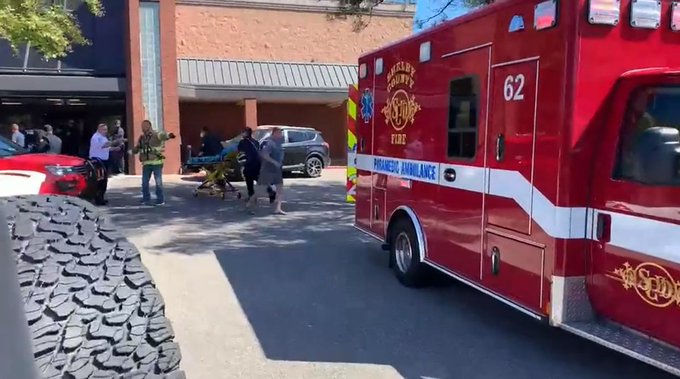 Multiple people were injured Thursday in a shooting inside the Kroger on Byhalia and Poplar Avenue in Collierville, a Memphis suburb, after an active shooter incident officials are calling the “most horrific event” in the town’s history.

A family member and a Collierville alderman has identified one of the victims as Olivia King.

The suspect’s vehicle is still parked and is being investigated. Sources say the suspect was a sub contractor who did work in the store’s deli department.

Lane said officers entered the store just after 1:30 and found multiple people shot, and employees in hiding. He could not comment on whether the shooter was an employee, saying it was under investigation.

Lane called it “the most horrific event that’s occurred in Collierville history.”

Multiple witnesses report hearing at least a dozen shots. Some customers made it out of the store. Employees had others take shelter in the cooler, witnesses said.

One employee named Brignetta Dickerson, who says she’s worked at the Kroger for 32 years, told WREG she hid with her coworkers and several customers when they heard the gunshots.

She said her only concern was her customers and coworkers.

“I’m still in shock right now,” said Dickerson. “But I was calm. I was calm and told the customers and my co-workers ‘Just sit down and relax. You’ll be okay.’”

Get the latest news updates on your phone! DOWNLOAD THE WREG APP

Jean Kurzawski said she worked in the back of the Kroger and heard noises toward the front entrance. She thought balloons were popping at first until she saw customers running. She escaped out a back exit and said she heard gunshots continuing behind her.

Kroger released a statement on the shooting:

We are deeply saddened by the incident that occurred at our Kroger store located on New Byhalia Rd. in Collierville, TN – a suburb of Memphis. The entire Kroger family offers our thoughts, prayers and support to the individuals and families of the victims during this difficult time. We are cooperating with local law enforcement, who have secured the store and parking lot. The store will remain closed while the police investigation continues, and we have initiated counseling services for our associates. To protect the integrity of the ongoing investigation, we are referring questions to the Collierville Police Department.

“We are praying for our associates here in Collierville,” she said.

Collierville is a beautiful town right outside of Memphis, TN.

Having lived in the Memphis Area most of my life, I have high school friends who live in Collierville.

When the news came on in the break room where I work, my first thought was that one or more of them may have been in the Kroger Grocery Store when this horrible event occurred.

I immediately went to Facebook to check and, thank God, none of them were in the store at that time.

Since the shooting, word has come out and has been confirmed that a disgruntled employee was the shooter.

If gave me a horrible feeling of Deja Vu, as this was very similar to the Southaven, MS Walmart Shooting back in July of 2019 when a fired employee ambushed the Store Manager as he got out of his car as he arrived to work. The murderer set the baby area of the store on fire and then killed the grocery manager, who also had a part in his firing.

That piece of trash got burned but survived.

I am sure that over the next several days that the Powers-That-Be in Memphis will get their mugs in front of every Television News Camera that they can and holler for “Gun Control”, which will be an extremely hypocritical move being that Memphis is the Third Most Dangerous City in America.

As Democratically-controlled cities like Memphis, Chicago, and New York have found out the hard way, strict gun control laws do not work.

Outlaws will find a way to get guns. That is why they are called “outlaws”.

Guns can not pull their own trigger.

What happened yesterday was horribly tragic.

Unfortunately, we live in a different culture than a lot of us grew up in.

And, without having a Solid Rock to stand on, society crumbles.