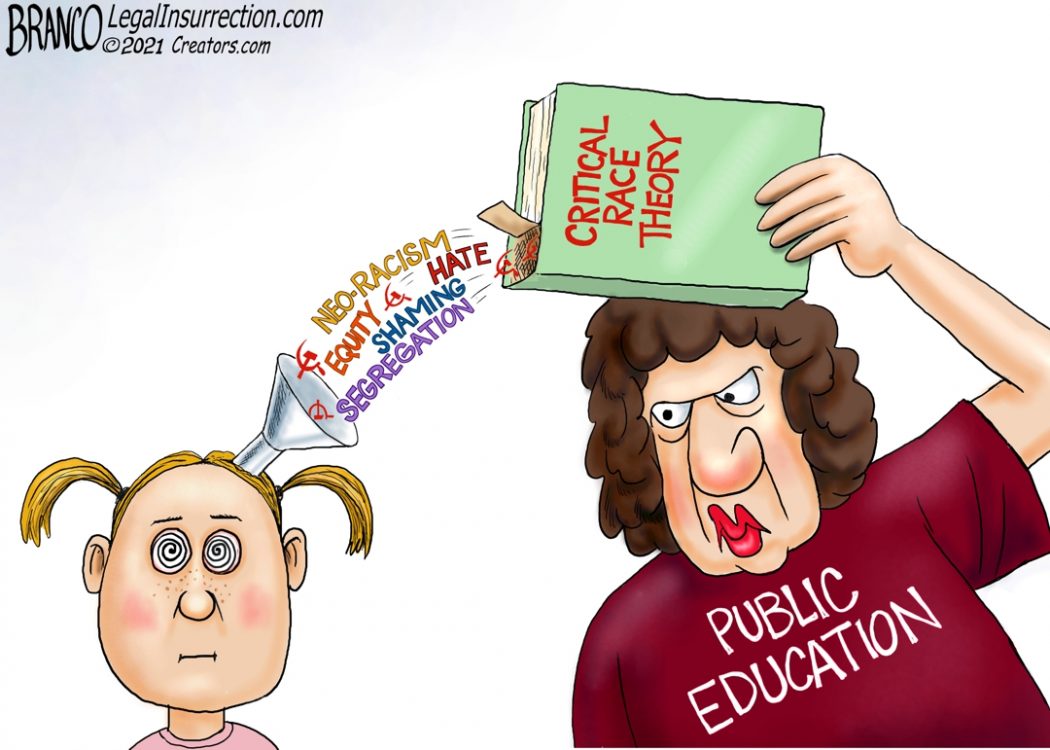 Critical race theory is an academic discipline, formulated in the 1990s, built on the intellectual framework of identity-based Marxism. Relegated for many years to universities and obscure academic journals, over the past decade it has increasingly become the default ideology in our public institutions. It has been injected into government agencies, public school systems, teacher training programs, and corporate human resources departments in the form of diversity training programs, human resources modules, public policy frameworks, and school curricula. – Christopher Rufo, “Critical Race Theory: What It Is and How to Fight It”, imprimus.hillsdale.edu

On Thursday, Reid, host of the MSNBC show “The Reid Out,” tweeted out several photos in an effort to compare current activists against critical race theory to race segregationists from the 1950s and 60s.

“A reminder that the earlier versions of these ‘anti-fake CRT parents’ also used their children as fodder and false cries of “communism” to enforce their ultra-conservative, white-supremacist vision of America. #uncancelhistory,” Reid tweeted.

This is not the first time Reid has unfavorably described critics of critical race theory. On Wednesday, Reid suggested that the grassroots movement to stop critical race theory from entering schools was “being exploited” by QAnon and other conspiracy theorists.

“That hysteria over the perceived encroachment of race-conscious education is being exploited by another insidious force: followers of QAnon who are now using the battle cry to similarly target school boards, with many who have espoused QAnon theories now melding their own conspiracies with the lies about critical race theory,” Reid claimed.

“I don’t know about you, but telling my child or any child that they are in a permanent oppressed status in America because they are Black is racist – and saying that White people are automatically above me, my children, or any child is racist as well. This is not something that we can stand for in our country,” King said.

“No. Why should they? It’s an academic theory mostly taught at the grad-student level,” Reeve responded.

I graduated from high school in 1976 in Memphis, Tennessee.

I watched as friends left to go to private schools because of forced bussing.

That was choice that their parents made in order to keep their children from being bussed across town from their neighborhood school.

If it were up to the NEA, children would be forced to be brainwashed by having to learned the Revisionist False History known as Critical Race Theory.

Christopher Rufo, in the article from which I quoted at the beginning of today’s post, explains that

There are a series of euphemisms deployed by its supporters to describe critical race theory, including “equity,” “social justice,” “diversity and inclusion,” and “culturally responsive teaching.” Critical race theorists, masters of language construction, realize that “neo-Marxism” would be a hard sell. Equity, on the other hand, sounds non-threatening and is easily confused with the American principle of equality. But the distinction is vast and important. Indeed, equality—the principle proclaimed in the Declaration of Independence, defended in the Civil War, and codified into law with the 14th and 15th Amendments, the Civil Rights Act of 1964, and the Voting Rights Act of 1965—is explicitly rejected by critical race theorists. To them, equality represents “mere nondiscrimination” and provides “camouflage” for white supremacy, patriarchy, and oppression.

In contrast to equality, equity as defined and promoted by critical race theorists is little more than reformulated Marxism.

Do you know why Joy Reid and the other Far Left Talking Heads are so desperate for American Children to be indoctrinated with Critical Race Theory?

Because the Democrats are attempting to create a generation of Marxist-loving, anti-American, Useful Idiot “New Bolsheviks” through the use of Racial Division and Revisionist History.

However, the United States of America remains the country that everyone wants to come to, legally or otherwise.

Because for almost 250 years, this “Shining City Upon a Hill” has had a reputation as a land in which everyone could make their dreams a reality…if they were willing to work to achieve it.

Our economic system of capitalism has been the cause of millions of Americans achieving their dreams and providing for their families.

America is a country chiseled out of the wilderness by rugged individualists who wanted not only the freedom to prosper…but the freedom to worship as they pleased also.

America is a “Sweet Land of Liberty”.

And, Liberty is Freedom with responsibility.

The responsibility to provide for yourself and your family…and to protect our precious liberty if our country goes to war.

The Far Left Democrats could care less about the sacrifices made and the lives lost to secure the Sovereign Nation which is today’s America.

Because they themselves are a bunch of “useful idiots” who want desperately to “share the wealth” and insult patriotism by calling it “nationalism” and “bigoted White Supremacy” in order to “radically change” our proven economic system of capitalism into “Democratic Socialism”, a form of Marxism, a political theory which has never worked in any country in which it has been tried.

For several generations, Democrats have told the impoverished that “Uncle Sugar” will take care of their every need as long as they keep voting them into public office.

However, these same impoverished Americans found out during the Presidency of Donald J. Trump the rewards of a good job and hard work.

Boys and girls, the reason that the Biden Administration and the rest of the Far Left Democrats do not want Americans to be proud of America and our actual shared history that it reminds Americans of every good and just quality that this nation was founded upon and which has kept us strong for almost 250 years.

It fills us with pride and gratitude that we live in the Greatest Country on the Face of the Earth.

Everything that the Far Left Democrats despise.

The Leader of the Russian Revolution, Vladimir Lenin, who brought Marxism to Russia, wrote

“Give me just one generation of youth, and I’ll transform the whole world.”

However, Lady Margaret Thatcher, a close friend of President Ronald Reagan, laid that falsehood to rest with the following quote…

“The problem with socialism is that you eventually run out of other people’s money.”

And, you know what?

I would much rather live in “the Land of the Free and the Home of the Brave” than under a failed political system where you can not even buy a decent roll of toilet paper.