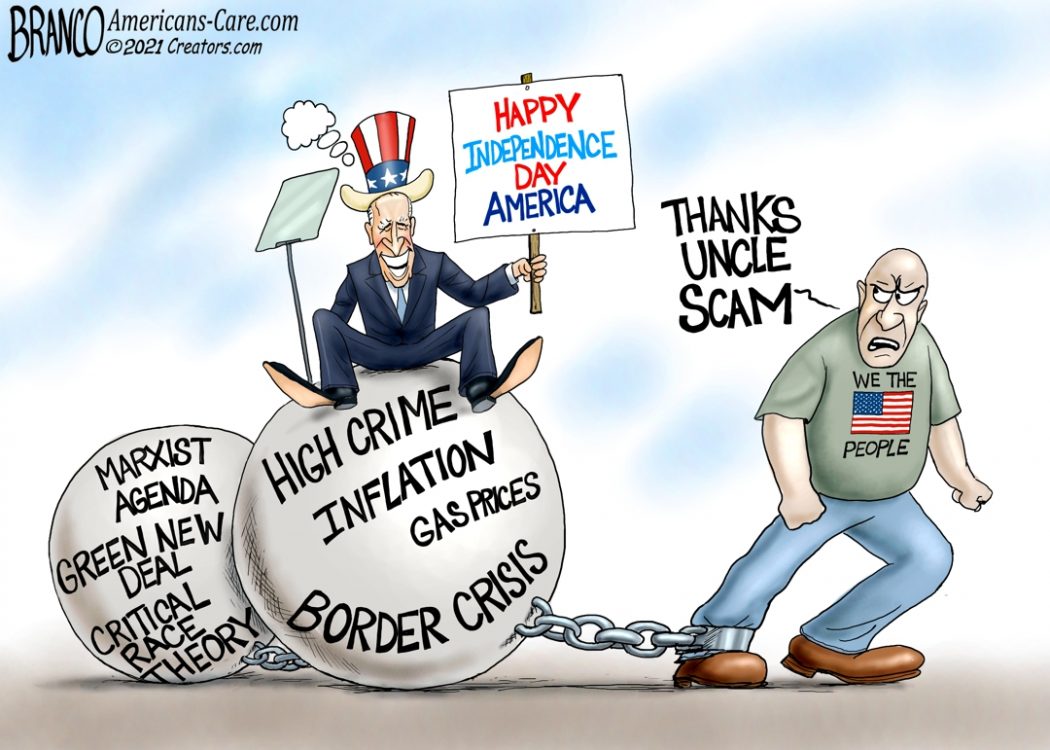 "Our movement is far from over, in fact our movement has only just begun." Trump concludes his rally in Sarasota, Florida. https://t.co/VlT7z8drtO pic.twitter.com/FdaNw6zdOl

“Those who seek to erase our heritage want Americans to forget our pride and our great dignity, so that we can no longer understand ourselves or America’s destiny. In toppling the heroes of 1776, they seek to dissolve the bonds of love and loyalty that we feel for our country, and for each other.” – Donald J. Trump, 45th President of the United States of America, July 3, 2020

On July 4th, 1986, the greatest president in my lifetime, Ronald Wilson Reagan, delivered these words to a television audience. They are as inspirational today as the day that they were given.

My remarks tonight will be brief, but it’s worth remembering that all the celebration of this day is rooted in history. It’s recorded that shortly after the Declaration of Independence was signed in Philadelphia celebrations took place throughout the land, and many of the former Colonists — they were just starting to call themselves Americans — set off cannons and marched in fife and drum parades.

What a contrast with the sober scene that had taken place a short time earlier in Independence Hall. Fifty-six men came forward to sign the parchment. It was noted at the time that they pledged their lives, their fortunes, and their sacred honors. And that was more than rhetoric; each of those men knew the penalty for high treason to the Crown. “We must all hang together,” Benjamin Franklin said, “or, assuredly, we will all hang separately.” And John Hancock, it is said, wrote his signature in large script so King George could see it without his spectacles. They were brave. They stayed brave through all the bloodshed of the coming years. Their courage created a nation built on a universal claim to human dignity, on the proposition that every man, woman, and child had a right to a future of freedom.

For just a moment, let us listen to the words again: “We hold these truths to be self-evident, that all men are created equal, that they are endowed by their Creator with certain unalienable Rights, that among these are Life, Liberty, and the pursuit of Happiness.” Last night when we rededicated Miss Liberty and relit her torch, we reflected on all the millions who came here in search of the dream of freedom inaugurated in Independence Hall. We reflected, too, on their courage in coming great distances and settling in a foreign land and then passing on to their children and their children’s children the hope symbolized in this statue here just behind us: the hope that is America. It is a hope that someday every people and every nation of the world will know the blessings of liberty.

If you listen to the Mantra of Modern American Liberals, you would think that America is the worst Nation on the face of the Earth.

Personally, I do not give one cent of value to their assessment of “The Shining City Upon a Hill”.

Rather, I stand with this man who embodied the American Spirit that is beginning to awaken across this blessed land.

Gen. Anthony Clement McAuliffe is best remembered for uttering a single word — no mean feat, considering that even the shortest Bible verse has two. Commanding the U.S. Army’s beleaguered and surrounded 101st Airborne Division during World War II’s Battle of the Bulge, McAuliffe received a German surrender ultimatum. “Nuts!” he replied, and became a lasting symbol of American courage and determination under fire.

A 1918 West Point graduate, McAuliffe held various field artillery positions before World War II. On the eve of D-Day, McAuliffe jumped with the first wave as a commander of division artillery, although he had never received formal parachute training.

In December 1944, during the siege of Bastogne, Belgium, McAuliffe was acting commander of the 101st in Gen. Maxwell D. Taylor’s absence. The Americans had been holding the Belgian town “at all costs,” and on Dec. 22, Gen. McAuliffe received the encouraging news that the 4th Armored Division was beginning its drive north to relieve the 101st. Later that morning, members of the division’s glider regiment saw four Germans coming up the road carrying a white flag. Everyone hoped they were offering surrender. Instead, they presented two pages demanding the Americans’ surrender: “To the USA Commander of the encircled town of Bastogne. . .There is only one possibility. . .the honorable surrender of the encircled town.”

McAuliffe glanced at the message and said, “Aw, nuts!” When he told his commanders he didn’t know what answer to send, Lt. Col. Harry Kinnard said ‘That first crack you made would be hard to beat, General.” Everyone laughed as a sergeant typed up the succinct response: “To the German Commander: Nuts! The American Commander.”

Between this stoic reply, Patton’s troops from the south, and a change in the weather that allowed air reinforcement the following day, the 101st was able to hold Bastogne. Their victory resulted in the first full-Division Presidential Distinguished Unit Citation.

McAuliffe’s actions at Bastogne helped assure the final defeat of the Germans. Gen. McAuliffe continued to serve on active duty, including assignments as Head of the Army Chemical Corps, Commander, 7th Army, and Commander-In-Chief of the U.S. Army, Europe, until his 1956 retirement. He died in Washington, D.C. in 1975 and is buried at Arlington National Cemetery.

If you have been paying attention to what has been happening in our Sovereign Nation since the installation of “President” Joe Biden, you have witnessed clueless arrogant Far Left Local and National Democrat Politicians,  celebrities and professional athletes acting like a bunch of spoiled ungrateful wannabe Marxists, a “Woke Elite”, if you will, aided by the Biden-Harris Administration,, attempt to erase our nation’s history through their attempts to introduce a fictional version of our nation’s history into the curriculum of public school systems and universities, in order to further divide our nation through Cultural Marxism..

Those who are leading this movement to “radically change this “Shining City Upon a Hill” into a Third World Marxist country echo the sentiments of the 44th President of the United States of America, Barack Hussein Obama, and the rest of the Far Left self-proclaimed geniuses who cost the Democratic Party the Presidency in 2016 and who cheated their way into the White House in 2020. and who believe that anybody who works hard for a living and believes in God and Country, is a Jingoistic imbecile.

For the past 2 decades at least, children and young adults, attending American Institutes of Learning from kindergarten to college campuses have been taught by Liberal teachers and professors that America is “just another country” and to be a patriot is to somehow be close-minded, ignorant, and bigoted, not necessarily in that order.

Evidently, the overeducated imbeciles who planned this Marxist uprising which we have witnessed over the last year and a half have never understood in their ungrateful little lives what has made and continues to make our country exceptional.

And that, boys and girls, is why, on this 4th of July, almost 5 years after average Americans watched with a sense of prideful accomplishment as Donald J. Trump took the Oath of Office, Modern American Liberals are still showing the world their posteriors while continuing to throw the longest mass temper tantrum in recorded history., even though they “won” the 2024 Presidential Election.

Their ego-driven political ideology does not permit them to consider the reality that theirs is still the minority political ideology in this nation, as shown during the ongoing Marxist uprisings by Antifa and Black Lives Matters, during which they continue tp demonstrate that they champion a Far Left Fascist political ideology which none but a small minority on the Far Left of the Political Spectrum embrace.

So, to summarize, by embracing Marxism, by labeling Patriotism as “Jingoism”, and by ridiculing and accusing  those of us who love our country and hold fast to Traditional American Values as being “racists”, the Democratic Party are well into the process of ruining this country, and making average Americans so mad that they are beginning to fight back by showing up to school board meetings and speaking out against the Democrat-driven Cultural Marxism which they are attempting to brainwash our children with.

Once again, the arrogance of the “Woke Elite” is going to not only cost them the Presidency…it will also cost them the House of Representatives and the Senate, as well.

If I was a Modern American Liberal with any sort of self-awareness, I would be ashamed of disrespecting both my flag and my country.

Unfortunately, the Far Left “Democratic Socialists” who have taken over the once mainstream Democratic Party and who guide poor old demented Joe Biden, are not self-aware.

It is this lack of self-awareness that is allowing average Americans to witness the implosion and political extinction of the Democratic Party right before our very eyes.

In the opinion of this 62-year-old, sitting in the Northwest corner of the Magnolia State in America’s Heartland, Modern American Liberals, and their ideological leaders, who trod the Halls of Power with impunity, underestimate the American Spirit, just as King George and the British Aristocracy did, so many years ago.

As our enemies, both foreign and domestic, have discovered since the birth of our nation, Americans will fight for our freedom.

And now, almost 5 years later, thanks to the arrogant overreach of the Far Left Ideologues who are controlling Joe Biden, his Administration and the Democrat Politicians on Capitol Hill, the citizens of our Sovereign Nation are beginning to once again rise like a phoenix from its ashes and we are preparing to SAVE AMERICA!

May God Bless you and your family on this 4th of July, the Year of Our Lord, 2020, and may God Bless America.