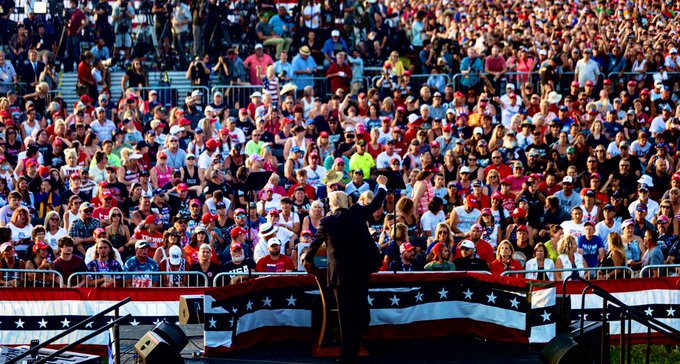 “Above all else MAGA is a movement based on Common Sense!”

President Trump is back. pic.twitter.com/zaZouFFEPc

“Joe Biden is destroying our nation right before our very own eyes,” Trump told a Wellington, Ohio, campaign rally broadcast on Newsmax, the first of its kind since he left office in January.

“After just five months the Biden administration is already a complete and total catastrophe. I told you. Crime is surging. Murders are soaring. Police departments are being gutted. Illegal aliens are overrunning their borders. Nobody’s ever seen anything like it.

The crowd stopped his comments about 10 minutes in with a chant, “four more years.”

“So you have to deliver massive majorities for Republicans in Congress next year – have to do it,” Trump continued. “Right here in Ohio’s 16th congressional district you have the opportunity to elect an incredible patriot to Congress, who I know very well.

“He grew up in this area, believe it or not; he’s not a carpetbagger, like so many lot of them. They say, ‘Sir, I’m running for Congress, so I say, ‘Good, how long have you lived there?’

“‘Well, actually, I moved there last week. I saw an opening.”

“Max Miller. You know, Max. He loves our country. He loves the people of Ohio. And Max was a trusted aide of mine in the White House. We had great people working for me. We had some real losers, too, by the way.”

Miller’s GOP primary opponent, Gonzalez, is a former NFL wide receiver for the Indianapolis Colts, and was rejected by Trump.

“Max’s opponent is a guy named Anthony Gonzalez, bad news,” Trump said. “He’s a grandstanding, RINO [Republican in Name Only], not respected in D.C, who voted for the unhinged, unconstitutional illegal impeachment, which hunt – the witch hunt.”

“He’s a sellout,” Trump continued. “He’s a fake Republican and a disgrace to your state. I will tell you that, and he’s not the candidate that you want representing the Republican Party. He’s the candidate of [Wyoming GOP Rep.] Liz Cheney. That’s another beauty.”

“Joe Biden is squandering all of this hard-earned respect that we have – or had – bowing down to America’s enemies and embarrassing our country on the world stage,” Trump said. “You saw that, it was an embarrassment.”

Trump called out Democrats in key battleground states for changing election processes without the constitutional authority of state legislatures.

“With the help of everyone here tonight and patriots all across the country, we will do all that we are supposed to be doing and much more when we win giant Republican majorities next year.”

I have to tell y’all…it was great to watch the 45th President of the United States of America do what he does best: communicate directly with average Americans.

Talk about a breath of fresh air,

I will take the brash honesty and “mean Tweets” of Donald J. Trump over the anti-American Policies and prevarications of Dementia Joe and Heels Up Harris any day of the week.

Last night, American Citizens living in the Buckeye State of Ohio heard from a man who genuinely LOVES America and her people, instead of viewing us all as racist, misogynist, xenophobes…the 45th President of the United States of America, Donald J. Trump.

Just like Trump did, with his refusal early in his first Presidential campaign to “act more presidential”, he is still taking his message directly to the American People.

You see, Gentle Readers, Trump has always been a “people person”.

That is the reason that, when he was still a contributor to Fox News, he would speak to everyone in the building, from the maintenance crew, on up the ladder.

As Sam Walton, the Founder of Walmart, knew, you don’t inspire people by acting imperious and above it all.

“Mr. Sam”, until his health would no longer allow him to do so, would travel to Walmart Stores in his old pickup truck, with a tie and a baseball cap on, visiting the employees, in order to find out how his stores were doing.

He knew that the only way to be successful and to stay in touch with the public, was to be out among them, and speak to them honestly and directly, as one would speak to a friend.

Just as President Trump did when he went on a “Thank You” Tour after being elected in 2016 and his use of Twitter to speak directly to the American People.

The Political Establishment, of both parties, lost that concept, a long time ago.

Bypassing the borders to communication, historically determined by both political parties and the Main Stream Media, is a concept which I first witnessed being used by a Presidential Candidate in the 1980 Presidential Election, the legendary Ronald Wilson Reagan.

While I am not comparing the two, I am noting that this strategy has proved effective for both men.

As America witnessed last night, Trump continues to strike a resonant chord in the hearts of Average Americans, living in the part of America, which the snobbish Political Elites refer to as “Flyover Country”, but which we refer to as “America’s Heartland”, or, quite simply, “HOME”.

The reason being, President Trump kept his promises.

He does not talk down to us while disparaging our Sovereign Nation, as Sleepy Joe Biden, “Dr.” Jill Biden, and Kamala Harris do..

Trump talks to us in a plain-spoken, clearly understood way, a style which is in stark contrast to a Far Left Democrat party full of professional politicians, whose only interest is the totalitarian retention of power in Washington, D.C., at whatever the cost.

Last night, the President of the United States of America, the most powerful man in the world, made residents of the Buckeye State, along with the rest of us average Americans, feel good about ourselves and the future of our Sovereign Nation

And, gentle readers, to see and hear a Former, and possibly Future American President who genuinely loves this country and her people and who was willing to give up his “lifestyle of the rich and famous” in order to secure a safe and prosperous future for American Citizens is indeed a “radical change” from what this country is experiencing coming out of the Oval Office now.