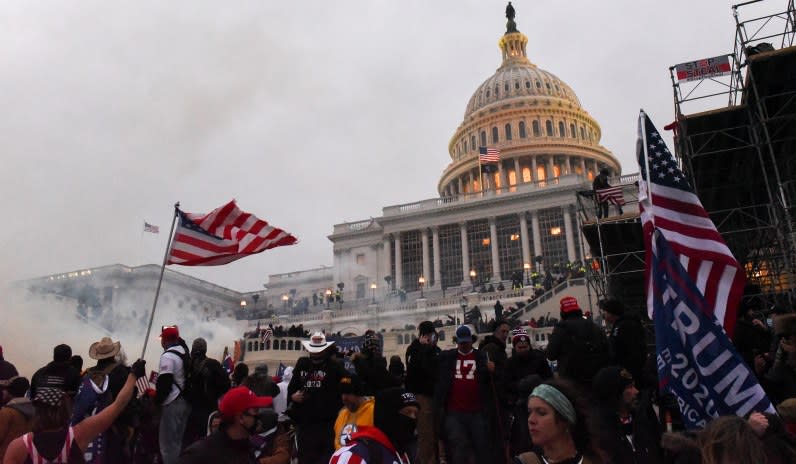 Former President Donald Trump says he was concerned days before the Jan. 6 riot at the Capitol about the size of the crowd expected near the Capitol and requested 10,000 National Guard troops to be deployed, but that his request was rejected because House Speaker Nancy Pelosi and other leaders did not like the optics.

“I requested, I said this rally will be bigger than anything thinks,” Trump told Fox News’ Steve Hilton on “The Revolution” Sunday night, in an interview airing after his CPAC speech. “Everyone said we’ll be at the rally. It was, I think, the largest crowd that I have ever spoken to before. I have spoken to big crowds, hundreds of thousands of people, more than that, but hundreds of thousands of people.”

Trump said he “gave the number” to the Department of Defense that 10,000 members of the National Guard would be needed.

“They took that number, from what I understand, they gave it to people at the Capitol, that is controlled by Pelosi, and I heard they rejected it because they didn’t think it would look good,” said Trump.

On the day after the riot, Trump said in a recorded video that he “immediately deployed the National Guard and federal law enforcement to secure the building and expel the intruders.”

Meanwhile, according to Jane Campbell, the president and CEO of the U..S. Capitol Historical society, Capitol Complex security is the direct responsibility of a four-member Capitol Police Board, which includes both the House and Senate sergeants-at-arms, who report to the leaders of those chambers, reports PolitiFact.

According to reports from The Washington Post and The New York Times, Irving told Sund he didn’t want troops at the Capitol on Jan. 6 because of “bad optics.”

Pelosi’s office and the Defense Department have not immediately responded to Trump’s comments, reports Fox News.

Trump also told Hilton that he “hated” to see what unfolded at the Capitol, but denied that he was watching the events unfold on television in real time and compared the riot to unrest that took place in cities such as Portland and Seattle last summer.

Now, boys and girls, I’m just spit-balling here, but there a several things that just do not add up in Pelosi and the Democrats’ version of what happened on January 6, 2021.

And, why, as seen in the article above, did Pelosi and McConnell block the request for 10,000 National Guard Troops from President Trump, himself?

Oh, and why did the police officers guarding the Capital Building let the rioters in?

To quote Elmer Fudd, “Something awfuwwy scwewy is going on around heah.”

One thought on “Trump’s Request for 10,000 National Guard Troops for January 6th Speech was Rejected by Pelosi and Others for “Bad Optics””