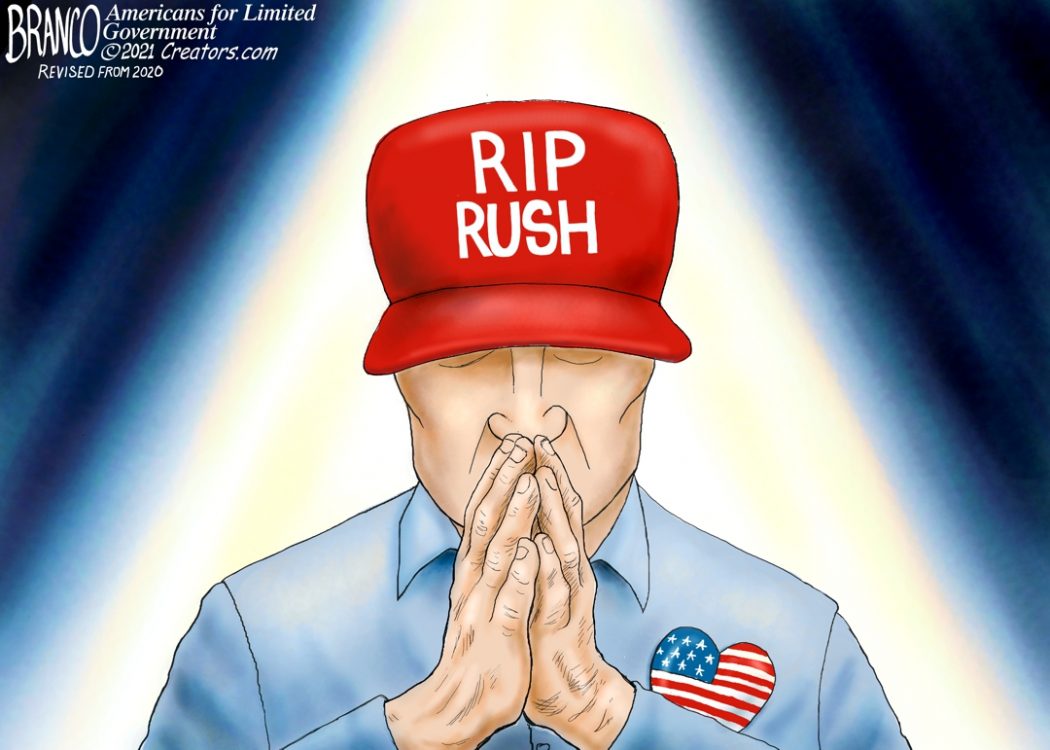 “The great Rush Limbaugh has passed away to a better place, free from physical pain and hostility. His honor, courage, strength, and loyalty will never be replaced. Rush was a patriot, a defender of Liberty, and someone who believed in all of the greatness our Country stands for. Rush was a friend to myself and millions of Americans—a guiding light with the ability to see the truth and paint vivid pictures over the airwaves. Melania and I express our deepest condolences to his wonderful wife, Kathryn, his family, and all of his dedicated fans. He will be missed greatly.” – President Donald J. Trump

Conservative icon Rush Limbaugh, who single-handedly created the era of national political talk radio and had the most listened to program in U.S. history, died Wednesday of lung cancer a year after announcing his diagnosis with the disease. He was 70.

Limbaugh’s wife, Kathryn, made the announcement on his radio show.

A cultural force with a cumulative weekly radio audience of more than 20 million at his peak, an author of seven books — two of which were New York Times best sellers, and the host of a nationally syndicated TV show, Limbaugh was hailed by Republicans and conservatives and derided by Democrats and liberals.

In 1994, his daily broadcasts trumpeting conservative politics and policies were credited with helping Republicans gain control of both houses of Congress for the first time in 40 years as part of Newt Gingrich’s “Republican Revolution.” The party gained 54 seats in the House — the biggest change in nearly a half century — and Limbaugh was bestowed with an honorary membership by the incoming freshman congressional GOP caucus.

He was presented with the Presidential Medal of Freedom at the 2020 State of the Union Address by President Donald Trump, in which he thanked Limbaugh for “decades of tireless devotion to our country.”

A college dropout from Cape Girardeau, Missouri, who was fascinated with radio, Limbaugh began his career as a disc jockey on a suburban Pittsburgh radio station in 1971 and later moved to KQV in the city. He was fired from both after some of his comments were considered controversial and was told by the general manager of KQV that he would never make it as an on-air personality.

He returned to his home state of Missouri in 1975 for other on-air radio jobs, getting fired from both before taking a job in group sales with the Kansas City Royals baseball team. He returned to radio for a short-lived job in Kansas City in 1983, and, after being fired, took another on-air position at KFBK in Sacramento, California, replacing trash-talk TV pioneer Morton Downey Jr.

It was there that Limbaugh developed more of the format and style that would catch the attention of former ABC Radio President Edward McLaughlin and later transfer to his nationally syndicated eponymous “The Rush Limbaugh Show.” Limbaugh debuted the program in 1988 — three hours weekdays from noon to 3 p.m. ET — on WABC in New York with 50 affiliated stations in the Excellence in Broadcasting, or EIB, network.

His popularity quickly grew, gaining millions of fans — or “dittoheads” — who would call with the greeting “dittos,” meaning how much they liked and enjoyed the program. In 1992, following the election of Bill Clinton as president, Limbaugh appeared on the “The Phil Donahue Show.” Donahue chided Limbaugh that with Clinton’s election, “the party was over.” Limbaugh responded that the party for him was just beginning.

He would go on to accumulate the largest audience in the history of American radio, syndicated to 650 stations across the country, according to Talkers Magazine.

I can remember when I first started listening to Rush Limbaugh.

Having been a Radio News Director in the late 1970s on the student-run station at then-Memphis State University, the first time I listened to Rush, my mind was completely and utterly blown away.

Here was a guy who was also from the Mid-South, getting paid to interpret the news on radio and to interact with listeners.

Not only was this guy funny, his comments were informed and spot on.

He talked with reverence about “Ronaldus Magnus” (President Ronald Reagan) and later would drive both the Clintons and the Obamas absolutely crazy.

He spoke for those average Americans living between the coasts who would later be labeled by Democratic President Candidate Hillary Clinton as “Deplorables”.

He spoke about God and country, sports and entertainment, economics and foreign policy, interpreting all as only he could, with optimism and good humor that even when times were rough, the American people would see them through.

Over the years, he took a lot of heat from the Main Stream Media and their bosses in the Democratic Elite for his bombastic personality and his willingness to speak out against the Democrats’ poor stewardship of the land which he loved.

Rush Limbaugh was  a fighter.

And now, his fight is over and he is in the presence of Our Creator returning the loan of immense talent which God gave to Rush Hudson Limbaugh III.

So, if you would, any of you who, like myself, have been inspired by Rush Limbaugh, take a moment out of your hectic day to say a prayer in remembrance of this good man who helped not only to launch radio careers like the late Tony Snow, Sean Hannity, and Mark Steyn, but has quietly contributed a lot of time and money to charities, both on his show and in his private life.

He inspired a lot of Americans, including this one.

He told us that all of our voices mattered and that we should “fight the good fight” for the land that we love.

So, in April of 2010, I started writing daily articles, which have literally been read by people around the world.

Rush Limbaugh spent a lifetime standing up for America and the Constitutional Right of Americans to have their voices heard.

.He is gone and there will NEVER be another like him.

It is up to us to honor him by continuing his fight for Traditional Faith and Values and preserving our American Freedom.

So, I will keep writing…