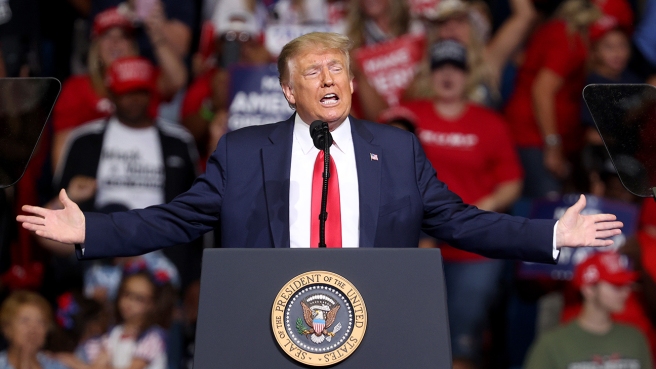 President Trump roared back onto the campaign trail Saturday night with a rally before thousands of supporters in Tulsa, Okla., using the fiery and freewheeling appearance to mock Democratic foe Joe Biden, criticize those tearing down monuments to controversial historical figures and decry what he described as the “disaster” demonstration in Seattle.

The rally, his first in months, comes amid prolonged concerns about the coronavirus pandemic and a nationwide outcry over racial injustice in the wake of George Floyd’s death. Before an enthusiastic and placard-waving crowd — in an arena that still had visible empty seats despite expectations of a packed house — Trump described his party as one of equality and justice but also hammered a “law and order” message in response to those protests that escalated into violence.

Trump specifically tore into the occupation of several blocks in Seattle by left-wing protesters, which covers an abandoned police precinct, saying it is an example of the “radical left.” The occupants, whom Trump described as “anarchists,” call their area the Capitol Hill Occupied Protest, or CHOP.

“We’re not talking about some little place, we’re talking about Seattle,” Trump said, criticizing the Democratic officials in Seattle and Washington state. He said he had a standing offer that “any time you want, we’ll come in” and straighten out the issues in Seattle “in an hour or less.”

But, he said: “I may be wrong, but it’s probably better for us to just watch that disaster.”

Trump added that a congressman on the flight to the rally told him he shouldn’t step in to end the CHOP occupation in order to let people see “what radical left Democrats will do to our country.”

He also cited “radicals” that targeted statues of Thomas Jefferson and Christopher Columbus in recent days and said that a law should be passed that burning the American flag results in a year in jail. While touting his chances in November, Trump repeatedly used examples of protesters tearing down monuments and the Seattle CHOP zone as a foil for his “law and order” theme — while insisting Biden, the presumptive Democratic presidential nominee, would always “cave” to such “radical” parts of his party.

“Do you want to bow before the left-wing mob or do you want to stand up tall and proud as Americans?” he asked at one point.

The rally’s scathing tone, impromptu digressions and political broadsides reflected Trump slipping right back into his campaign element after the pandemic-induced hiatus. Trump also called a Boeing official a “dumb son of a b—-,” in describing defense contract negotiations with the company. He said he eventually saved “like a billion six or a billion seven” in the negotiation.

Tulsa marked the president’s first rally since early March, when both Trump and Biden canceled in-person campaign events as the seriousness of the coronavirus crisis began to set in. But Trump, who for months has been itching to get the country’s economy back to normal and get himself back in front of supporters at his rallies, is the first to resume large in-person events.

…Trump also claimed Saturday that the “silent majority is stronger than ever” and touted Republicans as the “party of Abraham Lincoln” and “law and order,” in comments appearing to indicate how he will frame his reelection campaign as the November election approaches.

Trump made the declarations at Tulsa’s BOK Center — which itself became an epicenter of controversy amid protests outside and lingering concerns over the potential coronavirus risk of holding the rally.

In advance of the Saturday event, Trump supporters had been lining up for days to secure their seat in an arena that holds just under 20,000, and the Trump campaign touted Monday receiving over 1 million ticket requests.

But the rally, despite the hiatus, hit the familiar notes.

Trump early in his remarks touted reform to the U.S. Department of Veterans Affairs, the breakneck pace at which the Senate has confirmed his judicial nominees and tax cut legislation he signed into law.

Additionally, Trump spent a significant amount of time addressing criticism he got for what appeared to be a gingerly walk down a ramp and an awkward sip from a glass of water at a West Point graduation earlier this month. Trump defended himself, alluded that Joe Biden had health issues instead of himself, then took a sip of water to loud cheers from the crowd, before tossing the water out of the glass.

“That’s enough, I wanted to tell that story, does everybody understand that story?” the president concluded.

Trump also targeted China over trade concerns and the coronavirus. He said that his trade efforts helped American farmers and at one point called the coronavirus the “Kung Flu.”

Trump also criticized Biden for not agreeing with his decision in the early stages of the coronavirus pandemic to close off travel from the country. “He never did anything against China, Joe Biden,” Trump said.

Biden in a Saturday evening tweet slammed Trump for holding the rally despite the coronavirus concerns — Oklahoma has seen a recent bump in cases of the disease.

“Donald Trump is so eager to get back to his campaign rallies that he’s willing to put people at risk and violate CDC guidelines — as long as they sign a waiver promising not to hold his campaign liable. Unbelievable,” Biden tweeted.

This followed the BOK Center asking the Trump campaign this week for a written plan on how it would engage in social distancing among the rally-goers. The Trump campaign appeared to dismiss the arena’s concerns, making clear that the event would be an on-brand Trump rally.

“We take safety seriously, which is why we’re doing temperature checks for everyone attending, and providing masks and hand sanitizer. This will be a Trump rally, which means a big, boisterous, excited crowd,” Murtaugh said in a statement.

Last night, my wife and I were watching the Greg Gutfield Show on Fox News after the Rally.

Gutfield made a very sold point about those who did not criticize the “protestors for being “unsafe in the pandemic but are criticizing Trump and his supports at the Tulsa Rally being a bunch of “asses”.

He was exactly right.

Last night, average Americans waited hours to see an American President who is presently under siege by professional politicians, those who pull their strings, and their foot soldiers, Antifa and Black Lives Matter, whom I have named “The New Bolsheviks”.

Those American Citizens living in Tulsa who were in that arena last night heard from a man who genuinely LOVES America and her people, instead of viewing us all as racist, misogynist, xenophobes…the 45th President of the United States of America, Donald J. Trump.

Just like Trump did, with his refusal early in his campaign to “act more presidential”, he is still taking his message directly to the American People.

You see, Gentle Readers, Trump has always been a “people person”.

He is not, and never has been, a professional politician.

And, he refuses to play by THEIR rules.

That is the reason that, when he was still a contributor to Fox News, he would speak to everyone in the building, from the maintenance crew, on up the ladder.

As Sam Walton, the Founder of Walmart, knew, you don’t inspire people by acting imperious and above it all.

“Mr. Sam”, until his health would no longer allow him to do so, would travel to Walmart Stores in his old pickup truck, with a tie and a baseball cap on, visiting the employees, in order to find out how his stores were doing.

He knew that the only way to be successful and to stay in touch with the public, was to be out among them, and speak to them honestly and directly, as one would speak to a friend.

Just as President Trump did when he went on a “Thank You” Tour and as he continues with his Daily Tweets to the American People..

The Political Establishment, of both parties, lost that concept, a long time ago.

Bypassing the borders to communication, historically determined by both political parties and the Main Stream Media, is a concept which I first witnessed being used by a Presidential Candidate in the 1980 Presidential Election, the before-mentioned Ronald Wilson Reagan.

While I am not comparing the two, I am noting that this strategy has proved effective for both men.

Regardless of what Democrats up on Capitol Hill and their Propaganda Arm, the Main Stream Media tell everyone who will listen to them, Trump continues to strike a resonant chord in the hearts of Average Americans, living in the part of America, which the snobbish Political Elites refer to as “Flyover Country”, but which we refer to as “America’s Heartland”, or, quite simply, “HOME”.

The reason being, President Trump is keeping his promises.

He does not talk down to us while disparaging our Sovereign Nation, as his predecessor did.

Trump talks to us in a plain-spoken, clearly understood and often hilarious way, a style which is in stark contrast to an opposition party full of professional politicians, whose only interest is the regaining of power in Washington, D.C., at whatever the cost.

Last night, the President of the United States of America, the most powerful man in the world, made that crowd from Tulsa, along with the rest of us average Americans, feel good about ourselves and the future of our Sovereign Nation by letting us know that he is not going anywhere despite the desperate Democrats and Never-Trumpers throwing every dirty trick in the book at him in a feverish attempt to drive him from office because they know that he is destined to win a second term as President of the United States of America.

I am certain that last night Biden, hiding in his basement, and the Democrat Elite in Washington were positively apoplectic over the truths which “that commoner” spoke.

Speaking for myself and the other average Americans who elected him, whom you snobs call “Deplorables”, we absolutely loved it.

To see and hear an American President who genuinely loves this country and her people and who was willing to give up his “lifestyle of the rich and famous” in order to secure a safe and prosperous future for American Citizens is indeed a “radical change”…and out here in the Heartland, it is greatly appreciated.