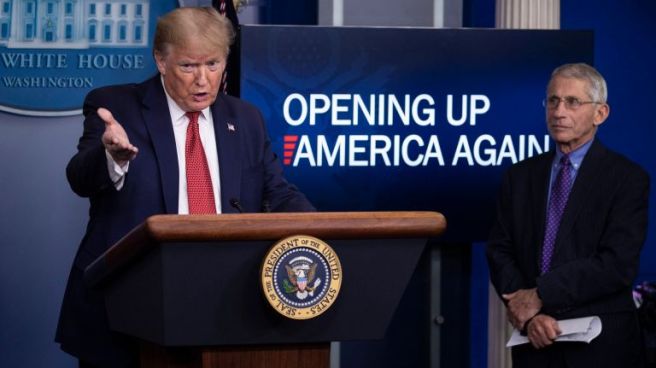 While Nancy Pelosi shows off her $25,000 refrigerator and $13 tubs of ice cream,

There are over 150,000 people living homeless in the state of California.

Let that sink in.

President Trump announced on Thursday the White House’s plan for eventually rolling back social distancing measures and reopening the country’s economy in several phases — depending on location — amid the coronavirus pandemic.
The plan calls for three phases to reopening the country, based on the severity of the coronavirus outbreak in each individual state or region.

The plan, which Trump announced along with the formation of a bipartisan council of lawmakers from both chambers of Congress, outlines “recommendations” for governors to develop their own plans to reopen. It also includes a number of criteria that must be met in terms of numbers of infections and hospitalizations before they can open up.

White House guidelines for … by Fox News on Scribd
The “Opening Up America Again” plan was signed off on by the president’s medical advisers, Dr. Deborah Birx, Dr. Anthony Fauci and Dr. Robert Redfield, and will be a “data-driven” approach with governors taking the helm in deciding, down to a county-level, how they will reopen their states, the White House said.

“We are not opening all at once, but one careful step at a time,” Trump said, adding that the guidelines were “based on hard verifiable data.”

He added: “Some states will be able to open up sooner than others.”

“Phase One” is for areas of the country who solely satisfy the criteria laid out by the White House and calls for social distancing to remain in place, avoiding gathering of more than 10 people, and avoiding any unnecessary travel.

“Phase Two,” which is for regions that have met the criteria twice and have not seen “a rebound” in infections, still calls for residents to practice social distancing and try to avoid large gathering but opens up the possibility of resuming non-essential travel.

The third phase, which is for areas who have met the criteria three times and have no rebounds of the virus, is the most open and allows vulnerable parts of the population to go back in public, opening back up gyms and bars, resuming full-time staffing at worksites and letting people head back to large venues like restaurants, movie theaters, churches and sports venues – albeit at a reduced capacity.

“This is a gradual process,” Trump said. “Throughout the process, citizens will still be called on to use all the weapons in this war.”

Trump said he’s spoken to governors of some western states who said they already have met the criteria in “Phase One.” The president, however, did not specify which states were set to open back up.

“I heard from a number who said they are in very good shape,” he said. “They will be ready to open literally tomorrow.”

Democrats’ reactions were mixed. House Speaker Nancy Pelosi, D-Calif., said in a statement, “The White House’s vague and inconsistent document does nothing to make up for the president’s failure to listen to the scientists and produce and distribute national rapid testing.” Oregon Gov. Kate Brown said, “I am pleased to see the federal government’s guidance follows a data-driven, science-based approach, similar to Oregon’s framework.”

The White House guidelines come amid a tempestuous week in which protestors across the country descended on state capitals to express their anger over the effects the lockdown measures were having on the economy despite thousands of new cases of COVID-19 being reported every day.

While President Donald J. Trump is trying to get Americans working again, what are the Democrats doing?

Well, while the Democratic Governors in the North are attempting their impersonations of a Medieval King or Queen, Nancy Pelosi is doing her impression of Marie Antoinette.

Per House Minority Leader Kevin McCarthy, Pelosi is holding up replenishing the Small Business Administration’s now-empty fund for loans to small businesses facing closure because of the Chinese Conoravirus Pandemic.

We now ran out of money, $350 billion. More than 1.6 million small businesses out of 5,000 banks got this loan. But as of today, we ran out of money and now we are in jeopardy of all the other loans that are in there because we requested last week to move it,” McCarthy continued. “Speaker Pelosi and Chuck Schumer said no.

“She is the only thing holding it up. She sent an individual to the floor of the Senate to object,” he added. “Had they not objected, this would have passed [with] unanimous consent. The Democrats are objecting.

“Now we are up to 22 million Americans [unemployed] and Nancy Pelosi is spending the time behind a very expensive refrigerator bragging about her gourmet ice cream.”

Rep. McCarthy is referring to a segment on last Monday Night’s “Late, Late Show” with James Corden. Here it is for your viewing displeasure.

President Trump is working day and night to try to get America’s Economy functioning again so Americans can feed their families and pay their bills.

Meanwhile, Speaker Pelosi is showing off her enormous freezer with all sorts od decadent ice cream and gelato, safe within her walled mansion in San Francisco, California, where the homeless defecate of the streets, oblivious to all of the Americans who are out of work and the business owners who have had to lay them off and who now may have to close the doors of their businesses for good.

President Trump needs to call Congress back in session immediately and make them do the jobs which they were elected to do.

Liberals have been reminding everyone lately that America does not have a King.

They are exactly right.

However, we do have an Aristocracy…a Democratic one.