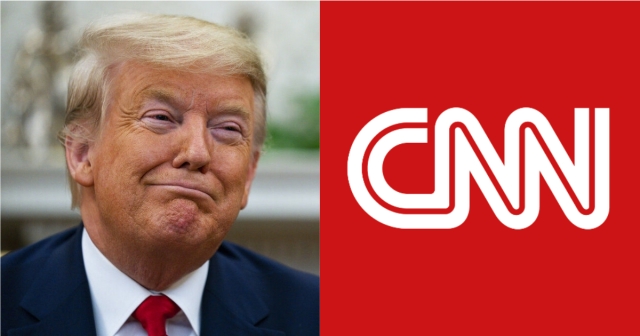 It’s time they pay for their lies.

EXCLUSIVE: President Trump’s re-election campaign filed a libel lawsuit against CNN on Friday for publishing “false and defamatory” statements about seeking Russia’s help in the 2020 election.

“The complaint alleges CNN was aware of the falsity at the time it published them but did so for the intentional purpose of hurting the campaign while misleading its own readers in the process… the campaign filed this lawsuit against CNN and the preceding suits against The New York Times and The Washington Post to hold the publishers accountable for their reckless false reporting and also to establish the truth,” Senior Legal Adviser to Donald J. Trump for President, Inc. Jenna Ellis told Fox News.

Fox News obtained the complaint, filed in the U.S. District Court for the Northern District of Georgia where CNN is located. It states in part that CNN claimed Trump’s campaign “assessed the potential risks and benefits of again seeking Russia’s help in 2020 and has decided to leave that option on the table.”

The complaint said that CNN was well aware the statements were false “because there was an extensive record of statements from the Campaign and the administration expressly disavowing any intention to seek Russian assistance” but promoted the claim anyway.

“The Campaign therefore was left with no alternative but to file this lawsuit to: publicly establish the truth, properly inform CNN’s readers and audience (and the rest of the world) of the true facts, and seek appropriate remedies for the harm caused by CNN’s false reporting and failure to retract and apologize for it,” the complaint said.

CNN did not immediately respond to a request for comment.

Trump has long feuded with CNN and regularly refers to the network as “fake news.” Ironically, CNN president Jeff Zucker helped increase Trump’s fame when he greenlit “The Apprentice” while overseeing NBC years before Trump entered the world of politics, but the two have since had a public falling out.

The article referenced by the complaint was published on CNN.com on June 13, 2019.

Larry Noble’s CNN story, headlined “Soliciting dirt on your opponents from a foreign government is a crime. Mueller should have charged Trump campaign officials with it,” was labeled as an opinion piece and featured a disclaimer that Noble is a CNN contributor but the commentary is solely his own view. However, the piece states that Trump’s campaign “assessed the potential risks and benefits of again seeking Russia’s help in 2020 and has decided to leave that option on the table” as a fact and was still on CNN’s website as of Friday afternoon.

CHRIS MATTHEWS’ SUDDEN EXIT LATEST DEBACLE FOR NBC: ’IT WAS ONLY GOING TO GET WORSE’

The complaint notes that the Trump campaign “has repeatedly and openly disclaimed any intention to seek Russian involvement in the 2020 election” and “examples of this are too numerous to fully enumerate.”

“False statements are not protected under the U.S. Constitution; therefore, these suits will have no chilling effect on freedom of the press. If journalists are more accurate in their statements and reporting, that would be a positive development, but not why these suits were filed,” Ellis added.

Decades ago, CNN and the rest of the Main Stream Media left objectivity behind and started to claim their opinions were facts.

It was bad enough when George W. Bush was in office.

However, since before the inauguration Donald J. Trump CNN and the rest of the MSM, just like their masters in the Democratic Elite, have made it their mission to remove President Trump from office by any means necessary.

Their lies and accusations concerning the president have been so outlandish that they must, like their Masters, believe that average Americans are gullible hayseeds who will believe anything that they put in front of us.

I have some news for them: that is exactly the attitude that cost the Democrats the Presidency in 2016.

Now, the Democrats will whine and claim that this is just Trump “putting on another show”.

He is very serious.

He was given a mandate by the America people which he has done his best to fulfill.

However, it is hard when you cannot et your message out through the MSM without them lying about what you are doing.

While the Main Stream Media has the right to their opinion about President Trump, they do not have the right to make false statements about him. as his lawyer said in the article above.

Speaking for myself, I hope that the President is successful in his lawsuit.

Perhaps it will give the Propaganda Arm of the Democratic Party, the Main Stream Media pause to reflect about what their actual job is.