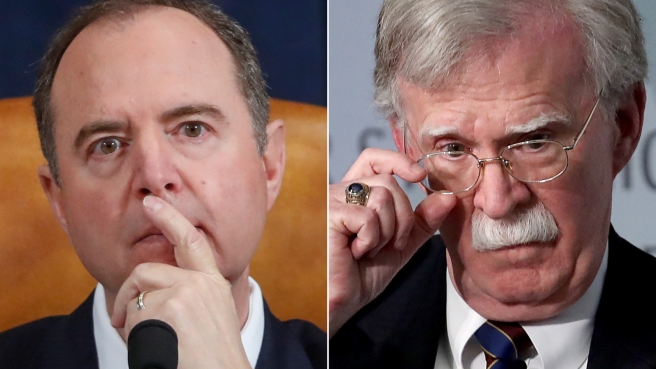 A string of newly resurfaced video clips of former national security adviser John Bolton spurred President Trump and his supporters Wednesday to highlight what they described as serious credibility questions — raised by both Democrats and Republicans — amid the Senate impeachment trial, as the president tweeted, “GAME OVER!”

Trump linked to an interview of Bolton in August 2019 concerning Ukraine policy. In the Radio Free Europe/Radio Liberty interview clip, Bolton made no mention of any illicit quid pro quo, and acknowledged, as Republicans have claimed, that combating “corruption” in Ukraine was a “high priority” for the Trump administration.

Bolton also called Trump’s communications with Ukrainian President Volodymyr Zelensky “warm and cordial,” without mentioning any misconduct. It seemingly contradicted reported assertions in Bolton’s forthcoming book that Trump explicitly told him he wanted to tie military aid to Ukraine to an investigation of Joe Biden. (Zelensky has said his communications with Trump involved no pressure for any investigation.)

Separately, Fox News has identified clips of Rep. Adam Schiff, D-Calif., now the lead House impeachment manager, in which he says Bolton had a distinct “lack of credibility” and was prone to “conspiracy theories.” This week, Schiff said Bolton needed to testify in the trial as an important and believable witness.

“This is someone who’s likely to exaggerate the dangerous impulses of the president toward belligerence, his proclivity to act without thinking, and his love of conspiracy theories,” Schiff told MSNBC’s Rachel Maddow on March 22, 2018, when Trump named Bolton national security adviser.

“And I’ll, you know, just add one data point to what you were talking about earlier, John Bolton once suggested on Fox News that the Russian hack of the DNC [Democratic National Committee] was a false flag operation that had been conducted by the Obama administration,” he said. “So, you add that kind of thinking to [former U.S. attorney] Joe diGenova and you have another big dose of unreality in the White House.”

Schiff made similar arguments back in May 2005, saying in an interview with CNN’s “Crossfire” that Bolton was “more focused on the next job than doing well at the last job” when he was up for nomination as ambassador to the United Nations under then-President George W. Bush.

“And particularly given the history, where we’ve had the politicizing of intelligence over WMD [weapons of mass destruction], why we would pick someone who the very same issue has been raised repeatedly, and that is John Bolton’s politicization of the intelligence he got on Cuba and other issues, why we would want someone with that lack of credibility, I can’t understand,” Schiff had said.

Then-Sen. Barack Obama, in 2005, echoed those arguments, calling Bolton “damaged goods” whose appointment as ambassador means “we will have less credibility and ironically be less equipped to reform the United Nations in the way that it needs to be reformed.”

Obama separately had said that Bolton “bullies, marginalizes and undermines those who do not agree with him.” Other prominent Democrats agreed at the time.

Bolton himself had admitted in the past that he would be more than willing to lie if he felt it was in the nation’s interest.

“If I had to say something I knew was false to protect American national security, I would do it,” Bolton said in an interview with Fox Business in 2010.

But, speaking to CNN on Monday, Schiff took a different approach — calling Bolton essential to the “search for truth.”

“I think for the senators, and I’m just not talking about the four that have been so much the focus of attention, for every senator, Democrat and Republican, I don’t know how you can explain that you wanted a search for the truth in this trial and say you don’t want to hear from a witness who had a direct conversation about the central allegation in the articles of impeachment,” Schiff said on CNN’s “New Day.”

Seemingly responding to charges of hypocrisy, Schiff remarked on the Senate floor late Wednesday, “I’m no fan of John Bolton, but I like him a little more now than I used to.”

Nevertheless, Democrats’ sudden about-face has been drawing some light mockery from even left-of-center commentators.

“Democrats are currently begging Mitt Romney to agree with them that John Bolton should swoop to the impeachment trial and save the day, but remember: you’re a despicable Trump-loving apologist if you said ahead of time that this entire thing would be a joke,” mused journalist Michael Tracey.

That’s something that we can all agree on.

This Sham Impeachment is a joke…and a bad one at that.

Even the House Democrats know that they started a joke, and unlike the song by the Bee Gees, it did not start the whole world laughing.

In fact, boys and girls, out here in the America between the coasts, which we like to call “Realityville”, the Democrats’ bad joke has made a lot of average Americans hotter than a 4th of July firecracker.

The Democrats listened to a bunch of loud, obnoxious radicals within their own political party and allowed their oversized egos, their continued anguish over losing the 2016 Presidential Election, and their obsessive hatred of President Donald J. Trump to convince themselves that they could actually impeach a sitting president by presenting articles which did not meet Constitutional Requirements.

And now, after a rigged partisan round of secret meetings in the Capitol Building Basement, which they called an “Impeachment Inquiry” without even taking a required vote, and not allowing any meaningful participation by the Republicans, the House Managers want the Senate Republicans to allow them to call witnesses which they decided that they didn’t need.

That is not the way that the Founding Fathers meant for an Impeachment to be adjudicated.

They meant for a bi-partisan House to deliberate and come up with articles which meet the Constitutional Requirements then present them to the Senate in a timely manner where both sides would present their case with the Chief Justice of the Supreme Court “presiding” to make sure that decorum is followed.

Then, the Senate would ask questions of both sides and later hold a vote to dismiss, acquit, or to impeach the president.

What we have been witnessing is a political coup being staged in front of the whole world with a bunch of professional political zealots attempting to take away the right to vote for the Presidential Candidate of their choice from the American people.

“The House of Representatives is not above the law.“

I most certainly hope so.

Because our Sovereign Nation will not survive if they are allowed to continue to act as if they are.

I pray that the punchline to the Democrats’ bad joke is the acquittal of President Donald J. Trump.