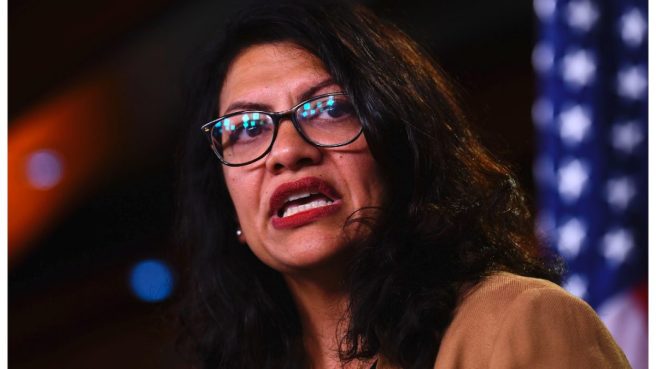 The Hill.com reports that

Rep. Rashida Tlaib (D-Mich.) revealed in a new interview that House Democrats have discussed jailing allies of the president who do not comply with congressional subpoenas, an escalation of the House’s efforts to force White House compliance with an impeachment inquiry.

Tlaib told Deadline Detroit that such an action, known as inherent contempt, would be “uncharted territory” for Congress but added that “serious conversations” about taking the step have occurred within the Democratic caucus.

“There have been actual serious conversations about what the logistics would look like … if we did have to force someone through a court order to come before the Congressional committee,” she said. “This is pretty uncharted territory for many of us and even for Congress.”

Tlaib’s comments echoed those of Rep. John Garamendi (D-Calif.), who called for the House to do as much in a CNN interview earlier this week.

“I think it’s time to call in the sergeant-at-arms and march them off to our little jail, which we do happen to have,” Garamendi said on Wednesday.

“Let them sit there and cool off for a while,” he added.

In an inherent contempt proceeding, the House or Senate would have its sergeant-at-arms or a deputy of that person take someone into custody.

The White House has warned Congress that it will not cooperate with an impeachment probe in the Democratic-controlled House, though a State Department official defied an order to not testify this week and met with congressional investigators.

That official was the Former Ambassador to Ukraine, who is a Democrat and close friend of the Clintons.

On October 8th, President Trump’s Legal Counsel Pat A. Cipollone sent an 8-page letter to House Speak Nancy Pelosi and the Chairmen of the three House Committees who have issued subpoenas to Administration members.

In a key paragraph, Cipollone writes

Given that your inquiry lacks any legitimate constitutional foundation, any pretense of fairness, or even the most elementary due process protections, the Executive Branch cannot be expected to participate in it. Because participating in this inquiry under the current unconstitutional posture would inflict lasting institutional harm on the Executive Branch and lasting damage to the separation of powers, you have left the President no choice. Consistent with the duties of the President of the United States, and in particular his obligation to preserve the rights of future occupants of his office, President Trump cannot permit his Administration to participate in this partisan inquiry under these circumstances.

Stephen B. Presser, a Professor of Law at Northwestern University School of Law, Writes in the article “Standards for Impeachment”, found at Heritage.org that

The word “impeachment” is popularly used to indicate both the bringing of charges in the House and the Senate vote on removal from office. In the Constitution, however, the term refers only to the former. At the Convention, the delegates experimented with differing impeachment proceedings. As finally agreed, a majority vote of the House of Representatives is required to bring impeachment charges (Article I, Section 2, Clause 5), which are then tried before the Senate (Article I, Section 3, Clause 6). Two-thirds of the Senate must vote to convict before an official can be removed.

In The Federalist No. 64, John Jay argued that the threat of impeachment would encourage executive officers to perform their duties with honor, and, used as a last resort, impeachment itself would be effective to remove those who betray the interests of their country. Like the limitations on the offense of treason, the Framers placed particular grounds of impeachment in the Constitution because they wished to prevent impeachment from becoming a politicized offense, as it had been in England. Nonetheless, Alexander Hamilton, in The Federalist No. 65, also warned that during impeachment proceedings, it would be difficult for Congress to act solely in the interests of the nation and resist political pressure to remove a popular official. The Framers believed that the Senate, elected by the state legislatures, would have the requisite independence needed to try impeachments. The Framers also mandated a supermajority requirement to militate against impeachments brought by the House for purely political reasons.

Boys and girls, that is exactly what we as a nation are witnessing right now.

The Democratic Party, by launching what they are euphemistically referring to as an “Impeachment Inquiry”, are attempting an end run around the United States Constitution.

These clandestine communications culminating daily in top secret closed door tribunals more closely resemble Joseph Stalin’s Great Purge from 1936-1938 in the Soviet Union when he got rid of anyone and everyone who he believe was a political dissident or simply an impediment to “The Communist Party” and his iron handed rule over the people of the Soviet Union, or proletariat than they do anything else ever seen in the history of American Politics.

By “getting rid of”, I mean Stalin either killed these “dissidents” or sent them by train to the Siberian Gulags, where they performed hard labor under horrendous living conditions until they died.

Make no mistake about it, the soul-eating hatred and absolute stark-raving madness being exhibited by the TDS-suffering Far Left House Democrats is no less horrifying and no less fascist than the actions of “Uncle Joe” Stalin or any other Marxist Leader that you can think of.

There is nothing Constitutional about what Pelosi and company are attempting to pull off here.

For them to even consider locking up Administration members without due cause is horrifying and bone-chilling, to say the least.

If they thought that they could get by with having their Deep State Minions in the Intelligence Communities grab President Trump and march him into their committee chambers to appear before them, the House Dems would do it in an instant.

Thank God that our Founders made us a Constitutional Republic with 3 Branches of government.

They only thing that is stopping them is that they know that average Americans would not stand for it.

By now, I am sure that you are asking “So, why doesn’t Pelosi just “call the vote” and get the Impeachment, which she claims now to want, started?”

With all of this mess they started, after almost 3 years of pontificating and bloviating, the Democrats still have nothing to impeach President Trump on.

And, if they try it, they will lose control of the House of Representatives and the President will be re-elected in an even bigger landslide than is already coming.

The House Dems’ Soviet Dog and Pony Show is not impressing average Americans and is digging them a political hole which eventually is going to send them the way of the Whigs.

And, it couldn’t happen to a nicer bunch.