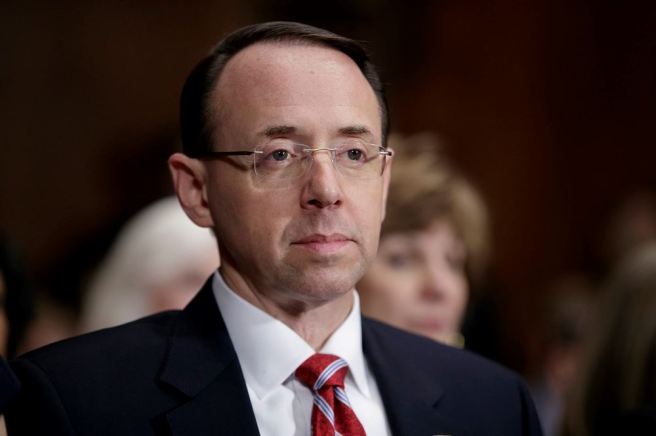 Deputy Attorney General Rod Rosenstein is expected to leave his role at the Justice Department by mid-March, a senior DOJ official told Fox News on Monday.

An official announcement of who has been selected to replace Rosenstein could come as early as this week. A Trump administration official added that Attorney General William Barr has picked Jeffrey Rosen, who currently serves as Deputy Secretary of the U.S. Department of Transportation, to take over for Rosenstein.

A graduate of Northwestern University and Harvard Law School, Rosen previously served as General Counsel and Senior Policy Advisor for the White House Office of Management and Budget (2006 to 2009) and as General Counsel at the Department of Transportation (2003 to 2006), according to his online biography.

Rosen, confirmed for his current role by the Senate in May 2017, works under Transportation Secretary Elaine Chao in overseeing the daily operations of the department.

Fox News reported in January that Rosenstein was expected to step down in the coming weeks to ensure a smooth transition for Barr, who was sworn-in on Thursday.

Rosenstein long thought of his role as a two-year position and the two-year mark is coming soon, officials close to the departing attorney general previously told Fox News.

Speculation of Rosenstein’s departure mounted after the firing of former Attorney General Jeff Sessions in November. He has, until recently, overseen Special Counsel Robert Mueller’s probe into whether Russia meddled in the 2016 presidential election. Rosenstein has often been a target of President Trump on Twitter.

Most recently, Trump accused Rosenstein, along with former FBI Deputy Director Andrew McCabe, of pursuing an “illegal and treasonous” plot against him after McCabe detailed private DOJ discussions about secretly recording and potentially ousting the president.

“He and Rod Rosenstein, who was hired by Jeff Sessions (another beauty), look like they were planning a very illegal act, and got caught,” the president tweeted early Monday.

Trump continued: “There is a lot of explaining to do to the millions of people who had just elected a president who they really like and who has done a great job for them with the Military, Vets, Economy and so much more. This was the illegal and treasonous ‘insurance policy’ in full action!”

Rosenstein, who was nominated to his post by Trump in 2017, repeatedly has denied he “pursued or authorized recording the president” and also has denied McCabe’s suggestion that the deputy attorney general had broached the idea of invoking the Constitution’s 25th Amendment, which allows Cabinet members to seek the removal of a president if they conclude that he or she is mentally unfit.

The Justice Department echoed both denials in a statement released last week, saying Rosenstein “was not in a position to consider invoking the 25th Amendment.”

The impeachment articles accused Rosenstein of intentionally withholding documents and information from Congress, failure to comply with congressional subpoenas and abuse of the Foreign Intelligence Surveillance Act (FISA).

At the time, I wrote…

The Hierarchy of the DOJ, like our municipal police organizations around the nation, are supposed to “serve and protect” the citizens of our great country.

Not themselves and the Democratic Party.

The silly games which Rosenstein and the Hierarchy of the FBI and the Special Counsel which he appointed have been playing for the entirety of the Trump Presidency became old, stale, and unappreciated by the American Public a long time ago.

A Deputy Attorney General of the Department of Justice has repeatedly told members of the House of Representatives that he did not know diddly-squat about the activities of those under him.

If you buy that, I would like to talk to you about purchasing a lifetime membership in the Alexandra Ocasio-Cortez Center for Rational Thought.

It is time to begin the process of restoring the System of Checks and Balances to the Three Branches of Government which our Founding Fathers so magnificently created and bequeathed to us.

Certain representatives of the Judicial Branch have decided that they outrank the Legislative and the Executive.

The Founders created all three branches to be servants of the American People.

It’s time to re-introduce Deputy Attorney General Rosenstein to a concept personified by a statue, known as “Blind Justice”.

Little did any of us suspect the depth of Rosenstein’s involvement in the Deep State Operation which began under the Obama Administration to first keep Trump from becoming president and then to somehow, someway force him out of office.

That operation began as election tampering, just as Obama tried in Israel to get rid of Netanyahu. When that did not work (again), the Deep State Operatives, with Rosenstein involved, came up with a plot to overthrow the president through the use of the 25th Amendment.

That, gentle readers, constitutes sedition and treason. There are no other words for what they attempted to do.

Back in the time of President Lincoln, Rosenstein and his co-conspirators would have already been executed by hanging or firing squad.

This weasel is being allowed to retire from government service with a big fat pension.

I believe that President Trump not only needs to fire Rosenstein immediately, he needs to have new Attorney General Barr begin investigations on the Deep State Operation that began under Obama and Hillary, also opening back up investigations on Hillary’s “E-mailgate” and the Pay For Play Scheme known as the Clinton Foundation.

And, while AG Barr is at it, he needs to investigate Adam Schiff’s connection to Fusion GPS.

It is way past time to play hardball with those who wished to overturn the will of the American people and to overthrow a sitting president.

One thought on “Rosenstein to Step Down in Mid-March…Why Not Fire Him Now?”