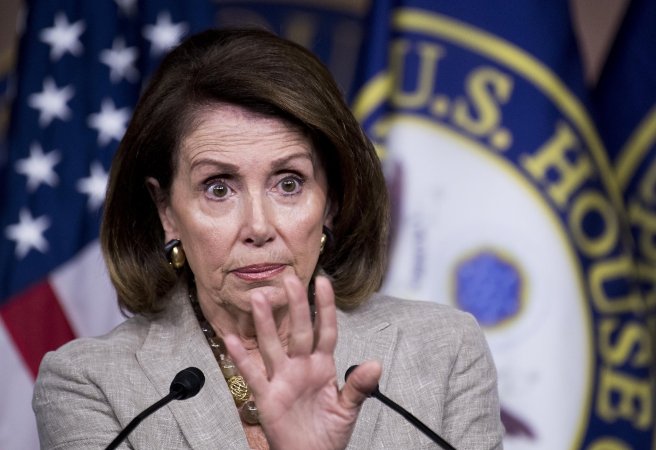 The White House on Thursday signaled that a “large down payment” on border wall funding — and potentially less than the $5.7 billion that President Trump has long requested — could be sufficient to bring Republicans to the table and end the ongoing partial federal government shutdown.

The possible concession from the White House came just minutes after the Senate rejected both Democratic and GOP proposals to end the shutdown, with both measures falling far short of the 60-vote threshold needed to pass.

But Democratic House Speaker Nancy Pelosi dismissed the proposal shortly afterward as a nonstarter, saying it was “not a reasonable agreement.”

“I don’t know if he knows what he’s talking about,” Pelosi added, referring to Trump.

The White House, in response, slammed Pelosi’s consistent rejections of compromise proposals. The House speaker has previously said she would not support any legislation that includes funding for the wall, which she characterized as an “immorality.”

“I know some people call her ‘Fancy Nancy’ — these days, I think a better nickname is ‘Dr. No,'” White House adviser Kellyanne Conway told Fox News on Thursday, referring to Pelosi. “Just keep hearing ‘no’ — just ‘no no no’ all the time – you can’t just stomp your feet and say, ‘Harrumph.'”

The Republican package that failed in the Senate would have provided the $5.7 billion while also offering several immigration-related concessions and tightening asylum rules, while the Democratic bill had no wall funding and included disaster-relief funding.

“Leader Mitch McConnell and Sen. Chuck Schumer are meeting now to see whether or not they can work out of the deadlock,” White House Press Secretary Sarah Sanders said Thursday evening, after the Senate votes. “As was made clear to Sen. Lindsey Graham, the three-week CR [continuing resolution] would only work if there is a large down payment on the wall.”

Trump, in separate comments to reporters at the White House, suggested that a “prorated down payment” on the wall, also without providing a concrete dollar figure, could be viable.

“If they come to a reasonable agreement, I would support that,” Trump told reporters, referring to Schumer and McConnell.

“We have a lot of alternatives” to end the shutdown, Trump added, before he asserted that illegal immigration and drug trafficking constituted a “virtual invasion” of the U.S. that could be stopped only by “a strong barrier or wall.”

If some of the “ingenious” smugglers and traffickers “were ever legit, they’d become very rich people,” Trump said.

He added: “Border Patrol — all of the drones flying up in the air, having a lot of fun flying drones all over the place — they don’t mean a thing when they look down and they see thousands of people rushing our border. The only thing that works is a strong barrier or wall.”

Separately, the president said it was “very reasonable” for Pelosi to block his planned State of the Union address in the House of Representatives until the end of the shutdown.

But in her own remarks Thursday, Pelosi said she was unsure what Trump was proposing, and indicated that a continuing resolution with any wall funding was a nonstarter.

“That is not a reasonable agreement between the senators,” Pelosi said, referring to a possible down payment on the wall.

“This is a very little known fact but it’s very important,” Crenshaw said. “Over the last week, we voted twice on a motion to recommit, which would send an appropriations bill back to committee, in order to pay federal workers. Now this is separate from the bipartisan plan to give them backpay. That’s separate. This is two other bills that would actually pay them in real time. This would actually pay them right now.”

If Democrats’ “priority is really federal workers,” Crenshaw said, “then let’s actually pay them so that they can’t be used as pawns.”

For his part, Graham, R-S.C., said in a statement Thursday, “The way forward is clear to me: a three-week continuing resolution (CR) that includes a down payment on wall/barrier funding and priorities of Democrats for disaster relief, showing good faith from both sides.”

And, it is not Pelosi and the Democrats.

As Rep. Crenshaw pointed out, the Democrats are holding 800,000 government workers hostage until they get their way in this matter.

Evidently, either they have forgotten, or they hope that President Trump has forgotten what happened to President Reagan when he gave amnesty to illegal aliens for Congress’ promise to build a Border Wall.

The problem is, as the President put it,

“The only thing that works is a strong barrier or wall.”

Yesterday, as was posted by NWC on SpartaReport.com, CNN reported that the Trump administration was preparing a draft proclamation to declare a national emergency on the southern border that called for $7+ billion for the border wall.

Now, if that report is true, and with CNN the probability is slim, Trump would be excising his best option to bring security to our Southern Border.

As exemplified, by Speaker closing the House down for the weekend yesterday with staying and working to solve the impasse, the Democrats actual do not give a rat’s rear about the plight of the 800,000 government workers who are not getting paid.

They are simply a means to an end.

And, that end is a wide open Southern Border enabling a new generation of Democratic Party Voters to illegally enter our Sovereign Nation.

Mr. President, you have done everything that you can do in order to negotiate in good faith.

It is time to begin construction of the barrier/wall on our Southern Border.

The safety of American citizens is at stake.

That was my ex-wife.