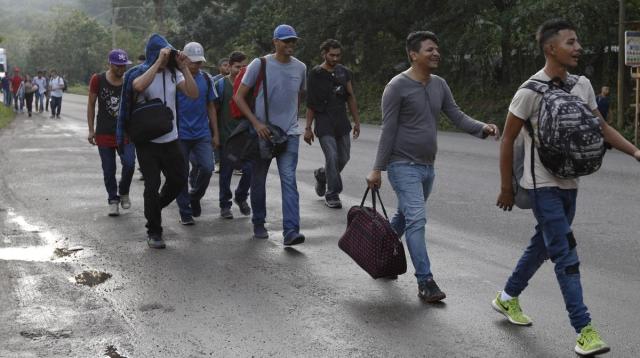 As a new caravan that began in Honduras and quickly swelled to an estimated 2,000 people made its way toward Mexico on Tuesday, Mexicans who live along the border towns that will likely be most affected took to the Internet to lash out against another wave of migrants.

“Work? Yes, there might be work for people who actually want to work, not for the lazy bums looking for entitlements,” said one commenter, with the screen name Azucena Santos, in Spanish on a YouTube page belonging to Shialeweb, who was recording the caravan. “Poor Mexicans, what’s in store for you!”

Juan Palomina remarked: “Now look, let’s see if whacko [Mexican President} Lopez Obrador mobilizes the Marines and keeps these idiots from coming to Mexico. Give them enough to eat, at least.”

…By Tuesday afternoon, a caravan that started with about 500 people grew to about 2,000, according to a representative from the Honduras National Commission of Human Rights, which travels with the caravan.

Word of the caravan’s departure was out at least as far back as last week. The newspaper La Prensa, of Honduras, reported on Jan. 9 that a caravan was scheduled to leave from San Pedro Sula on Tuesday – though the first group left the evening before.

The newspaper attributed the information to the immigration advocacy group “Pueblos Sin Fronteras,” or “Communities Without Borders,” as well as to “Dignificacion Humana,” or “Dignifying Humans.” Both groups said that some 4,000 migrants in all would end up being part of the caravan.

The hostile social media comments on Tuesday are the latest reflection of tensions that have simmered since the caravans began last year. The tension is particularly prevalent in Mexican cities like Tijuana, where many of the migrants are being held in overcrowded shelters.

Some say the concerns by people in receiving communities are, even if pointed, understandable. But others say the migrants deserve compassion for trying to flee conditions – often life-threatening – they did not create, and cannot control.

The mix of exasperated migrants in overtaxed shelters and Mexican residents growing increasingly concerned about strains on communities has led to a number of clashes. In November, for instance, about 300 Tijuana residents held an anti-caravan demonstration at the same time Central American migrants were holding a protest. The dueling demonstrations ended in a huge fight, with police stepping in and escorting the migrants to various shelters.

On its website, the immigrant advocacy group “Consejo Noruego para los Refugiados,” which is based in Colombia and has various offices in Latin America, decried the backlash against the caravan on “growing xenophobia in the U.S., as well as in Mexico.”

“The journey north will be extremely dangerous and taxing for thousands of families from Honduras, El Salvador and Guatemala that will be part of the trips in 2019,” the group said. “Probably the obstacles will increase along the journey, given that there’s fatigue and frustration in the communities that have until now supported the caravans.”

…Meanwhile, on Tuesday, Honduran authorities arrested and detained Juan Carlos Molina, identified by La Prensa, the Honduran newspaper, as a coordinator of the latest caravan.

Ira Mehlman, spokesman for the Federation for American Immigration Reform, which supports tighter enforcement, said the departure of another caravan was not surprising, considering indications there are individuals or organizations coordinating them. “Probably there are multiple parties involved, who have an interest in challenging the sovereign right of the United States to determine who can enter the country and under what circumstances,” he said.

“You have opportunists and you have people who, understandably, want to come to the United States,” he said, “It’s a situation that’s getting out of hand, and no one is doing anything about it other than an administration that trying to solve things through executive action.”

The Norwegian Refugee Council is an independent humanitarian organisation helping people forced to flee. We work in crises in 31 countries, where we help save lives and rebuild futures.

We deliver high-quality aid where needs are greatest. When we started our relief efforts after World War Two, humanitarian needs were critical. They still are – and we’re still there, protecting people forced to flee and supporting them as they build a new future. Today, we work in both new and protracted crises across 31 countries, where we provide camp management, food assistance, clean water, shelter, legal aid, and education.

We stand up for people forced to flee. NRC is a determined advocate for displaced people. When we witness injustices, we alert the world. We promote and defend displaced people’s rights and dignity in local communities, with national governments and in the international arena. NRC’s Internal Displacement Monitoring Centre in Geneva is a global leader in monitoring, reporting on and advocating for people displaced within their own country.

The Fox News article above refers to the NRC’s North Triangle Office, which is based in Columbia.

According to an article found on www.nrc.no, posted by the North Triangle Office,

A new caravan heading towards Mexico and the United States is reportedly set to leave San Pedro Sula in Honduras on Tuesday 15 January. “The large number of people expected to leave Central America is a true testimony to the desperate situation for children, women and men in this poor and violence affected region,” said Secretary General of the Norwegian Refugee Council (NRC), Jan Egeland. “Instead of talking about a crisis at the US-Mexican border, North Americans must wake up and address the real humanitarian crisis in Central America”.

The long walk north will be extremely dangerous and exhausting for the thousands of families from Honduras, El Salvador and Guatemala that will join the caravans planned in 2019. Obstacles on the way are likely to increase, as there is fatigue and frustration from communities who supported migrants during last year’s exodus. There is rising xenophobia in both the United States (US) and Mexico and increasingly tough border regulations in every country on the way.

“Border controls, guards or walls will never stop people who are hunted by gang violence and flee for fear for their lives. Youth who have lost all hope for a better future in Central America will try repeatedly to reach a better life in the US, Canada or Mexico. To tackle the current crisis, the more affluent American nations need to understand their own neighborhood and invest much more in bringing hope, security and good governance for people who currently see no other option than to flee”, said Egeland, who visited Honduras in December.

Well, gentle readers, I guess this answers the question as to “Who is organizing these caravans out of Honduras?”

It is already known that big Democrat Party Donors such as George Soros and Tom Steyer are providing monetary support. With this latest discovery, I would not be surprised if the United Nations is contributing a little “spending cash” to the “migrants” for their long journey to el Norte.

This whole mess keeps getting deeper and deeper, doesn’t it?

The only “New World Order” I’ve ever thought was real was the professional wrestling one which featured Hollywood Hulk Hogan, Kevin Nash, and Scott Hall, back in the days of WCW.

What we seem to have, either intentionally or unintentionally, are Progressives both within and outside our Sovereign Nation attempting to radically change America through the use of “migrant caravans” in an attempt to take advantage of America’s benevolence and largess.

With yesterday’s revelation that the Democrats remain unwilling to enter negotiations with President Trump about the construction of “barriers” along America’s Southern Border, and the facts concerning the Norwegian Refugee Council’s involvement in organizing these caravans, it truly appears that I and others were absolutely correct when we labeled the “migrant caravans” as an INVASION FORCE.

Mr. President…this IS a National Emergency.