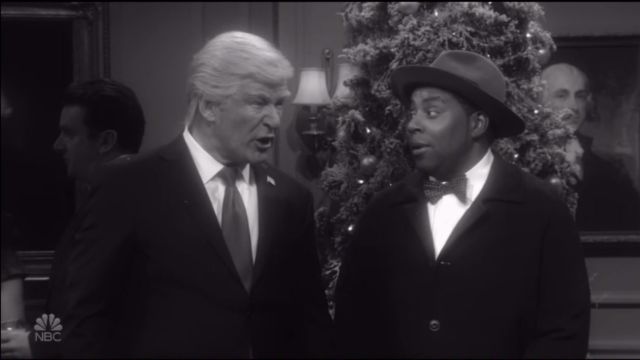 I’m so old that I can remember when Saturday Night Live was actually funny.

Donald Trump called for courts to test NBC and “Saturday Night Live” in a fiery tweet on Sunday that followed the final airing of the sketch show until the New Year.

“SNL” wrapped up a year of political humor directed at the Trump administration with a parody of the Christmas movie “It’s a Wonderful Life,” in which it posited a world wherein Donald Trump, played by Alec Baldwin, was never elected president of the United States.

The sketch, which featured returning guest stars Ben Stiller as Michael Cohen, Robert De Niro as Robert Mueller and Matt Damon as Brett Kavanaugh, showed Trump being led through a Christmas party in a world where Hillary Clinton became president. As each person from his administration approaches, Trump learns that him not being president worked out for the benefit of everyone. For example, the sketch suggested that he and Melania got a divorce and remarried others, Kavanaugh never made it onto the Supreme Court and Mueller was able to spend more time with his kids instead of having to “investigate some idiot for treason.”

Trump responded to the sketch on Sunday morning by jabbing both the sketch show and NBC.

Trump tweeted: “A REAL scandal is the one-sided coverage, hour by hour, of networks like NBC & Democrat spin machines like Saturday Night Live. It is all nothing less than unfair news coverage and Dem commercials. Should be tested in courts, can’t be legal? Only defame & belittle! Collusion?”

Trump previously commented on the content of “SNL” following the season premiere in which Kanye West donned a “Make America Great Again” hat and gave a lengthy speech at the close of the show.

“Like many, I don’t watch Saturday Night Live (even though I past hosted it) – no longer funny, no talent or charm. It is just a political ad for the Dems. Word is that Kanye West, who put on a MAGA hat after the show (despite being told “no”), was great. He’s leading the charge!” Trump tweeted at the time.

As Variety notes, Trump has also come after NBC in the past for what he perceives to be unfair coverage, even calling for the FCC to take action against the network’s broadcast license.

Back in May of this year FoxNews.com reported that

Piscopo starred in the late-night comedy show between 1980 and 1984, where he was famous for his impression of Frank Sinatra.

…Back in 2017, Piscopo told The Hollywood Reporter that despite being a lifelong Democrat, he supported Trump, his acquaintance for 25 years, during the presidential election.

‘“The reason I voted for Trump is because he said two words I’ve never heard a politician utter in my life,” he explained at the time. “Two words: ‘Inner city.’ I’m a spokesman for the Boys and Girls Club in New Jersey.

“I’ve walked the inner city 25 years. My mission in life has been at-risk children… I’m a blue-dog Democrat. So what am I? A moderate conservative? I don’t even know what I am. All I know is when it comes to jobs, I’m a union guy.”

Piscopo, who described himself as an “Italian Catholic pro-lifer,” considered running for New Jersey governor as a Republican but ultimately decided that same year not to do so.

The entertainer isn’t the only SNL alum who has openly shared their conservative views over the years.

Rob Schneider, a veteran of SNL, told The New York Daily News in April he believed Baldwin’s Trump impersonation is ruining the show because the actor lets his personal politics take center stage.

Rob Schneider: “To me, the genius of Dana Carvey was Dana always had empathy for the people he played, and Alec Baldwin has nothing but a fuming, seething anger towards the person he plays.”

“The fun of ‘Saturday Night Live’ was […] you never knew which way they leaned politically,” said the 54-year-old. “You kind of assumed they would lean more left and liberal, but now the cat’s out of the bag [and] and they are completely against Trump, which I think makes it less interesting because you know the direction the piece is going.”

First of all, Alec Baldwin attempting to portray ANYONE being obnoxious and arrogant is like Rosie O’Donnell being the spokesperson for Weight Watchers.

On April 11, 2007, Baldwin displayed his wonderful parenting skills in a verbal tirade which he unleashed in a phone call to his daughter…

After Ireland failed to answer her father’s scheduled morning phone call from New York on April 11, Alec went berserk on her voice mail, saying “Once again, I have made an ass of myself trying to get to a phone,” adding, “you have insulted me for the last time.”

Switching his train of thought, Baldwin then exercised his incredible parenting skills and took a shot at his ex-wife, declaring, “I don’t give a damn that you’re 12-years-old or 11-years-old, or a child, or that your mother is a thoughtless pain in the ass who doesn’t care about what you do.” The irate Baldwin went on to say, “You’ve made me feel like s**t” and threatened to “straighten your ass out.”

“This crap you pull on me with this goddamn phone situation that you would never dream of doing to your mother,” screamed Baldwin, “and you do it to me constantly over and over again.”

Before hanging up, Baldwin warned the child, “You better be ready Friday the 20th to meet with me.” That’s tomorrow

To call Alec Baldwin a hypocrite would be an insult to hypocrites.

From the days of Dan Aykroyd, John Belushi, and Garrett Morris to the days of Dennis Miller, Joe Piscopo, and Eddie Murphy, you could tune in on a Saturday Night and expect to be entertained…not lectured to by a bunch of self-righteous Liberals who were still throwing a temper tantrum over losing a Presidential Election which took place almost one and one-half years previously.

Just like the Late Night Talk Shows that run on the Broadcast Networks from Monday through Friday, SNL has ceased being funny and entertaining.

For years, the Democrats have been screaming hysterically about Conservative Talk Radio Programs, which have sprung up since the Godfather of that genre, Rush Limbaugh, saved AM Radio with the format.

They attempted Liberal Talk Radio, launching “Air America”, which eventually went down in flames like the Hindenburg.

If all these programs which I have mentioned continue to insist on being one-sided “spin machines” for the Democratic Party, then perhaps they should be treated as political programming and be regulated under the jurisdiction of the FCC as such.

Or, they could try to be funny, entertaining, and unbiased.

Although, considering the and the lack of intellect and character of those who appear on the programs in question, my suggestion is probably beyond their capabilities.