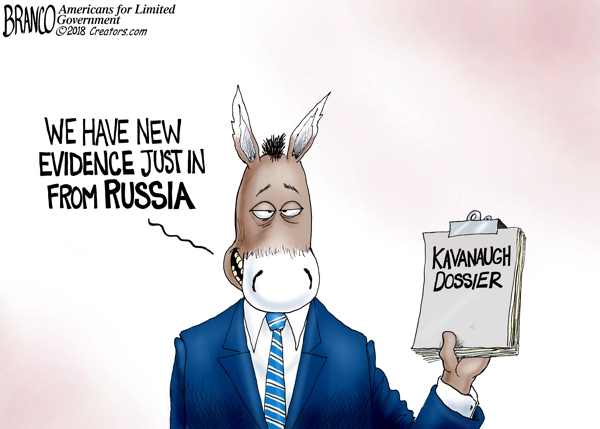 A couple of days ago I wrote that today was going to be a seminal moment in American History.

Watching the Democrats and their minions in the MSM, DC, and the Legal Profession double down on their efforts to deny a good man and exceptional Jurist the opportunity to take his rightful place on the Supreme Court, while defending the second-in-command of the DOJ who stands accused of sedition, convinced me that I understated the situation.

This current generation of “New Bolsheviks” as I have named them, have degenerated in their behavior since President Donald J. Trump took office to the point where they bear a striking resemblance to the antagonists in the 10-part television series on the USA Network titled “The Purge”, based on the series of movies bearing the same name.

Somehow, someway, America’s Liberal population, who proudly proclaim themselves to be Democrats, have experienced a massive psychotic break with reality.

This break has seen them forswear our System of Laws to declare Judge Brett Kavanaugh “Guilty Until Proven Innocent”. It also permeates the Halls of Justice themselves to where those in the Halls of power have sought to overturn the results of the 2016 Presidential Election by staging a “silent coup” attempt.

The message of the Traditional American Values of God and Country is not easily silenced.

However, if at first you don’t succeed…

Try, try again…like they are doing with their constant campaign against the Fox News Channel, Conservative Talk Radio, and Conservatives who use Social Media.

The Far Left Democratic Party with the support of the Main Stream Media, MoveOn.org, Media Matters, and George Soros are already in the midst of an all-out war in their attempt to drive President Donald J. Trump out of office by any means necessary and achieve what Obama failed to accomplish: turning American into a Socialist Country.

…Including recently using children to push to eliminate the Second Amendment of the United States Constitution.

In order to ensure that no leader of this new nation would go mad with power, and become a tyrannical despot, our Founders set up a System of Checks and Balances, overseen by Three Branches of Government: the Legislative, the Executive, and the Judicial, with each branch having a distinct and LIMITED role.

The situation, which we as a nation, find ourselves in today, is one which our Founding Fathers sought valiantly to avoid.

Thanks to the Imperious Presidency of Barack Hussein Obama, which empowered the Far Left, even after 18 months of the advances made by President Donald J. Trump, America is still suffering under a “Tyranny of the Minority”.

This minority is not based on color, rather, it is one based on political ideology and self-interest.

As Obama’s Presidency showed, this minority, buoyed by money from its “sponsors”, including the Halls of Power in Washington, DC, will shut down anyone who threatens “what they’ve got” by ANY MEANS NECESSARY, including political devices and beliefs, which we, as a country, have gone to war against in the past.

My late father was one of thousands of brave young American men, who landed on the beaches of Normandy , France on June 6, 1944, in the military operation which broke the backs of the Nazis, leading to the end of World War II, now known as D-Day.

World War II was a war against Fascism.

What is Fascism? Per merriam-webster.com, it is a

political philosophy, movement, or regime (as that of the Fascisti) that exalts nation and often race above the individual and that stands for a centralized autocratic government headed by a dictatorial leader, severe economic and social regimentation, and forcible suppression of opposition.

Ladies and gentlemen, I firmly believe that America is now fighting a new war against fascism.

It’s not a war that is being fought with guns and bullets, But instead, it is being fought with School Walkouts, boycotts, Non-Profit Organizations funded by George Soros, Schoolchildren Spokespeople, anonymous sources, unproven baseless accusations, and the Vanguard of the Modern Democratic Party, the Main Stream Media.

It’s not our Brightest and Best who are dying on this field of battle, but rather, it is our Constitutional Freedoms and our form of government, including our System of Checks and Balances, which are dying an ignoble death, pierced by the arrows of socialism and political correctness.

By now, there’s some out there in the audience saying, “Oh Lord, the crazy old cracker’s overreacting again.”

If you try to talk to a Liberal about this New Fascism, they will deny that there is any fascism going on at all. In fact, they will tell you that this is “the will of the people” and they will site Democratically stacked push polls in order to back their opinion up.

For example, when you ask Liberals if , “Gun Control” is the “will of the people”, why have firearm sales across America gone through the roof every time Far Left Activists threaten to take away Americans’ Second Amendment Rights? And, if there is “no fascism”, what do you call the fact that a little jerk like David Hogg, backed by the forces which I named earlier, can go around threatening the livelihood of Laura Ingraham by bullying her sponsors?

Or, if Judge Kavanaugh is truly the monster which they claim him to be, why have a couple of hundred American women who have known and worked with the Judge in the past, signed formal statements defending him?

And, finally, if President Trump is so horrible, why is he consistently scoring higher in Presidential Approval Polls than his predecessor, Former (Thank God) President Barack Hussein Obama (mm mmm mmmm)?

In response, you will usually see their eyes glaze over, like a deer in the headlights, or experience a dramatic pause in posting, if you are on the Internet.

Liberals can not legitimately defend their positions, such as the suppression of the Second Amendment Rights of average Americans, the Silent Coup by those members of the DOJ and FBI against President Trump, and the “Caining” of Judge Kavanaugh.

Fascism, in any form, remains indefensible, even, when a spineless Republican-led Congress sits idly by while they watch the Far Left indoctrinate our children and grandchildren and attempt to use them as their own version of the Communists’ “useful idiots”.

All of this political unethical behavior by the Far Left Democrats is reminiscent of both the Russian Revolution and Hitler and his Brown Shirts’ “Beer Hall Putsch” which probably should have been expected, given the “New Bolsheviks” track record of Liberal Intolerance and aversion to opposing viewpoints.

Ronald Reagan, during an interview with Mike Wallace on 12/14/75, quipped…

“You know, someone very profoundly once said many years ago that if fascism ever comes to America, it will come in the name of liberalism.”

The man was a prophet.