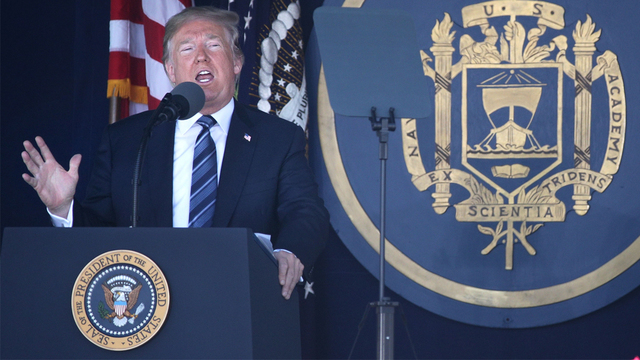 President Trump on Friday gave a triumphant, patriotic speech to 2018 graduates of the U.S. Naval Academy, promising to stand up for the U.S. without apology and hailing what he said was the re-emergence of American confidence since he took office.

“Our economy is the strongest it’s ever been and our country has regained the respect that we used to have long ago abroad,” he said in the commencement speech in Annapolis, Maryland. “Yes they’re respecting us again, yes America is back.”

Trump spoke to 1,042 newly commissioned ensigns and second lieutenants. In his remarks, he highlighted his efforts to increase federal spending and took credit for securing pay increases for the military and more ships.

He told the graduates that a robust military made America safer as “you’re less likely to have to use it if you have it,” but said that if the U.S. must fight, then it should fight to win.

“If a fight must come, there is no other alternative,” he said. Victory, winning, beautiful words but that’s what it’s all about.”

His remarks come a day after he cancelled a planned summit with North Korean dictator Kim Jong Un amid aggressive language from that country. Defense Secretary Jim Mattis on Friday, however, hinted that the summit may be back on “if our diplomats can pull it off.”

Trump has heightened tensions with Iran after he pulled the U.S. out of the 2015 Iran nuclear deal — a deal he had repeatedly blasted as a bad deal put together in part by the Obama administration

In his speech Friday, Trump also targeted “critics and cynics” within America who he said have sought to downplay the U.S.

“A growing number use their platform to denigrate America’s incredible heritage, challenge America’s sovereignty and weaken America’s pride,” he said.

That appeared to be a reference to some Democrats, who in a tweet earlier Friday Trump accused of “rooting against” the U.S. in its negotiations with North Korea, and siding with MS-13 gang members.

Trump ran his 2016 presidential campaign on the slogan “Make America Great Again” and in his remarks, suggested that he believed that his campaign slogan was being achieved, citing a “great reawakening of American spirit and American might.”

What the preceding article does not mention is the fact that President Trump, instead of leaving directly after addressing the Navel Academy Graduates as his schedule called for, stayed for an hour and half, shaking the hand of every single graduate and chatting with them.

What President Trump did on the spur of the moment yesterday illustrates quite vividly why those of us who live in America’s Heartland, between the coasts, could not be happier with the choice we made on November 8th, 2016.

So, here’s the deal, Snowflakes…

None of these fake news stories, Democrat-heavy polls, trumped-up charges by a Democrat-led Special Counsel Investigation over something which never happened, scurrilous charges from a woman who makes her living on her back, photoshopped pictures, or Occupy Democrat Memes on Facebook are making any difference to average Americans.

You Democrats, as a result of your own regional bias toward the major metropolitan areas on the East and Left Coasts, which has been obvious to average Americans for the last several decades, long ago effectively divorced themselves from the people whom you claimed in every previous election cycle to “love”…Average Working Class Americans.

Yet still, you expect us to believe the Fake News which you are desperately trying to distribute in a vain attempt get Trump out of office, and which you Liberal Trolls are posting on Social Media ad nauseam, so that they and you, in your shared madness can get a do-over and Hillary Clinton will somehow miraculously become the President.

Americans do not care what the Main Stream Media…or you…think.

They are the Propaganda Arm and you are their unpaid (usually) stable boys and girls.

They produce it and you shovel it.

To put it mildly and in Marital Terms, which even you can understand, Average Working Class Americans and the Democratic Party are no longer “evenly yoked”.

You Democrats became the party of the “Upper Crust” and Special Interest Groups, who look down their noses at Americans who live here in “Flyover Country”.

You Democrats assumed, after reading your own press clippings, that all Americans wanted and somehow, still want, the Progressive/Marxist Political Ideology and style of governance which Barack Hussein Obama practiced during his time as President.

The American People overthrew the “Tyranny of the Minority”, which we had suffered under for the last 8 years on Election Day 2016.

The President is exactly right.

He is fulfilling each and every Campaign Promise which he made to the American People.

No matter what you attempt to throw at him, he just keeps coming.

So, to summarize, for all of you America-hating Pajama Boys living in your Mom’s Basement and for you young ladies who are following the lead of marchers heading by an American-hating Iranian who is employed by the Puppet Master George Soros…

And, together with our AMERICAN PRESIDENT, we are MAKING AMERICA GREAT AGAIN.