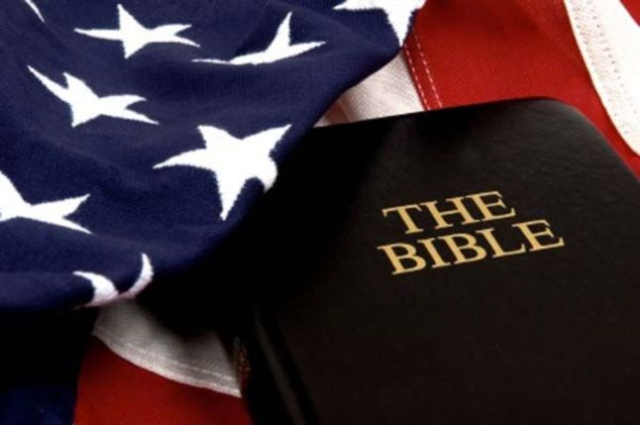 So, here we are….Superbowl Sunday.

A day that once meant a great deal to a lot of Americans out here in America’s Heartland.

This year…not so much.

After a couple of years of disrespect  toward our National Anthem, our flag, our Brightest and Best, and the Men and Women in Blue who keep our municipalities safe featured prominently in NFL Games, the NFL Players Association and Roger Goodell have accomplished something that I would once upon a time have thought to have been impossible: taken the luster off of Superbowl Sunday.

But, it is not just the athletes and Commissioner of the NFL who have shown their backsides to average Americans.

Last Tuesday night, during Donald J. Trumps first State of the Union Address, Democratic Congress men and women, like a bunch of petulant, ungrateful children, sat on their hands when President Trump reminded those in attendance and those watching across the nation that our country’s motto is “In God We Trust”.

Evidently the Democrats’ seething hatred for our 45th President blinded them to the fact that 75% of America’s population are indeed Christians who place the Almighty about ALL, including Democratic Congresscritters.

For what now seems like an eternity, those on the Left side (along with some of those who claim to be on the Right Side) of the Political Aisle, led by Former President Barack Hussein Obama,  have focused their attention on “radically changing” America.

They soon realized that they simply could not do it through popular culture and educational indoctrination, inundating America’s children with both overt and subliminal imaging designed to countermand the Traditional American Values that they were being raised with, in normal American Households, out here in “Flyover Country”, otherwise known as America’s Heartland…or “the Red States”.

Modern Liberals soon figured out that the way to program Americans into believing that “all paths lead to God” and that cradle-to-grave Nanny-State Government were the new American Standards for living our daily lives, was to turn Christian American Houses of Worship away from being instructors of the Word of God and a sanctuary in which to worship Our Creator, to, instead, being purveyors of the joys of Popular Culture. Wednesday Night Bible Studies were soon replaced by Yoga Classes and Encounter Groups. Religious Leaders were soon quoting philosophy, instead of the Bible in their Sunday Morning Sermons.

And, instead of taking a stand against those things of the world which were directly opposed to what is found in God’s Word, these “new, enlightened” churches started standing up for the “right” of a woman to have her baby prematurely yanked out of her womb with a set of tongs, standing up for the right of Adam to “marry” Steve, when the Bible states that marriage is between a man and a woman, and standing up for the equality of all faiths, when the Son of God firmly states, in John 14:6, that

I am the way, and the truth, and the life. No one comes to the Father except through me.

So, when is all this Christianity in America going to “fade away” as predicted by “the Smartest People in the Room”?

As polls have shown…not any time soon.

America remains a nation whose population consists of 70-75%, who proclaim Jesus Christ as their Personal Savior and 92%, who believe in God.

However, if you read some of the comments posted on Conservative Websites and Facebook Political Pages, by self-appointed “pundits”, you would think that Christian Americans are the minority in this nation.

I can testify from personal experience, having caught flack for sticking to my Christian American Conservative Principles, since beginning my daily posts on this blog in April of 2010.

My posts, concerning American Christianity, seem to “touch a nerve” in both Liberals and Atheists, alike. (But, in at least some cases, I repeat myself.)

Their reaction has hardly been unexpected.

Of course, one of the Hot Button Issues, which those Liberals and Atheists who responded, over the years, immediately denied, was that our Founding Fathers were Christians and that our country was founded on a Judeo-Christian Belief System.

Evidently, they had never read anything, except what their like-minded, non-believing soothsayers, allowed them to.  Or else, they would have read historical documents like President George Washington’s Thanksgiving Day Proclamation, written on November 1, 1777, and found at wallbuilders.com:

The committee appointed to prepare a recommendation to the several states, to set apart a day of public thanksgiving, brought in a report; which was taken into consideration, and agreed to as follows:

Forasmuch as it is the indispensable duty of all men to adore the superintending providence of Almighty God; to acknowledge with gratitude their obligation to him for benefits received, and to implore such farther blessings as they stand in need of; and it having pleased him in his abundant mercy not only to continue to us the innumerable bounties of his common providence, but also smile upon us in the prosecution of a just and necessary war, for the defense and establishment of our unalienable rights and liberties; particularly in that he hath been pleased in so great a measure to prosper the means used for the support of our troops and to crown our arms with most signal success:

It is therefore recommended to the legislative or executive powers of these United States, to set apart Thursday, the 18th day of December next, for solemn thanksgiving and praise; that with one heart and one voice the good people may express the grateful feelings of their hearts, and consecrate themselves to the service of their divine benefactor; and that together with their sincere acknowledgments and offerings, they may join the penitent confession of their manifold sins, whereby they had forfeited every favor, and their humble and earnest supplication that it may please God, through the merits of Jesus Christ, mercifully to forgive and blot them out of remembrance; that it may please him graciously to afford his blessings on the governments of these states respectively, and prosper the public council of the whole; to inspire our commanders both by land and sea, and all under them, with that wisdom and fortitude which may render them fit instruments, under the providence of Almighty God, to secure for these United States the greatest of all blessings, independence and peace; that it may please him to prosper the trade and manufactures of the people and the labor of the husbandman, that our land may yield its increase; to take schools and seminaries of education, so necessary for cultivating the principles of true liberty, virtue and piety, under his nurturing hand, and to prosper the means of religion for the promotion and enlargement of that kingdom which consisteth in righteousness, peace and joy in the Holy Ghost.

And it is further recommended, that servile labor, and such recreation as, though at other times innocent, may be unbecoming the purpose of this appointment, be omitted on so solemn an occasion.

Of course, the Poster Boy for the claim by Liberal/Atheist responders, concerning the Founders’ lack of  Christianity, is Thomas Jefferson.

Atheists like to bring up the fact that he wrote a version of the Bible which left out Christ’s miracles.  What they are reluctant to do, though, is explain why he wrote his book that way.  David Barton explains on wallbuilders.com:

The reader [of a newspaper article which Barton is replying to], as do many others, claimed that Jefferson omitted all miraculous events of Jesus from his “Bible.” Rarely do those who make this claim let Jefferson speak for himself. Jefferson’s own words explain that his intent for that book was not for it to be a “Bible,” but rather for it to be a primer for the Indians on the teachings of Christ (which is why Jefferson titled that work, “The Life and Morals of Jesus of Nazareth”). What Jefferson did was to take the “red letter” portions of the New Testament and publish these teachings in order to introduce the Indians to Christian morality. And as President of the United States, Jefferson signed a treaty with the Kaskaskia tribe wherein he provided—at the government’s expense—Christian missionaries to the Indians. In fact, Jefferson himself declared, “I am a real Christian, that is to say, a disciple of the doctrines of Jesus.” While many might question this claim, the fact remains that Jefferson called himself a Christian, not a deist.

Atheist Activists and young and/or misinformed Liberals and self-proclaimed “Libertarians” (but, in a lot of cases, I repeat myself), who reply to my posts, insist that Crosses and other Christian symbols have no place in the Public Square.

Relying on Far Left Ideologues or their own opinion as their “highest authority”, they continue their push to eliminate the practice of American Christianity and the Traditional American Morality and Ethics which go with it from Everyday American Life, attempting to regulate Christians’ role in American Society as remaining unseen and unheard from, worshiping in private, on Sunday mornings, only.

Or, as Actor and Professional Wrestler Dwayne “The Rock” Johnson would say, Obama and his minions want American Christians to

Sit down, shut up, and know your role!

Unfortunately for them, our Current President Donald J. Trump reinforced our rights as American s to our  Faith with an Executive Order early in his Presidency.

The First Amendment to the Constitution still holds.

Being filled with human beings, America’s churches have made a lot of mistakes, However, they have also done a lot of good in the Name of the Lord.

For example, the church I attend, houses a Food Pantry, operated in co-operation with other churches in our area, which feeds 2,000 people per month, counseling them, and getting them the assistance that they need.

Churches today have to walk a fine line.

The spiritual battle raging between the influence of American Popular Culture and those seeking the Will of God in their lives, takes all the strength…and prayer, that Christians can muster.

Modern Liberals seem to have great difficulty comprehending the role which Our Creator, the God of Abraham, played and plays in this Grand Experiment, known as the United States of America.

Why have Liberals ratcheted up their anti-Christian Vitriol and Negativity since January 21, 2009?

Why are they so focused on removing America’s Christian Heritage?

Well, as is usually my wont, I have been doing some “reckoning” about this.

It seems to this ol’ Southern Boy, living here in the Heartland, that America’s Christian Heritage and the very real fact of His influence in building and shaping America’s growth into the greatest country on the face of God’s Green Earth, not only stifles and interferes with Modern Liberals’ “anything goes”, “share the wealth”, “hive-mind”, “man is his own god” Political Ideology, but the reality of God’s very existence, somewhere deep in their miserable, bitter psyches, scares the mess out of them.

Why else would they be trying so hard to fight against the influence of Someone Whom they really don’t believe in?

And, a second and final thought occurred to me while watching the Far Left Democrats refuse to acknowledge God and the solid points which President Trump made pertaining to Traditional American Values last Tuesday night…

That is why the Democrats lost on November 8, 2016 and while they will continue to lose in the future.

The fool says in his heart, “There is no God.” They are corrupt, they do abominable deeds; there is none who does good. – Psalms 14:1