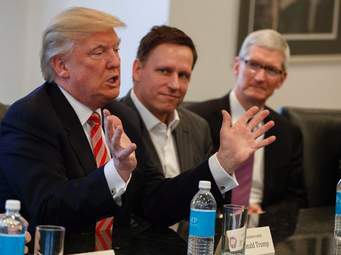 President Trump lamented “s—hole countries” during immigration negotiations on Thursday with lawmakers in the Oval Office, Fox News has confirmed.

“Why are we having all these people from s—hole countries come here?” the president said, in comments first reported by The Washington Post.

The president was referring to people from Haiti, El Salvador, Nicaragua, Honduras and African countries in the temporary protected status program, a source in the meeting told Fox News.

About a dozen people, both Republicans and Democrats, were in the room at the time, including South Carolina Republican Sen. Lindsey Graham and Illinois Democratic Sen. Dick Durbin.

Trump made the comments as Durbin was reading a list of temporary protected status countries.

The president also suggested the United States should admit more people from countries like Norway instead, the Post said. Trump had met with Norwegian Prime Minister Erna Solberg and held a news conference with her Wednesday.

In a statement, the White House did not deny Trump made the comments.

Democrats reacted by accusing the president of racism.

“As an American, I am ashamed of the president,” said Illinois Democratic Rep. Luis Gutiérrez. “His comments are disappointing, unbelievable, but not surprising. We always knew that president Trump doesn’t like people from certain countries or people or certain colors.”

Rep. Mia Love of Utah, whose parents were Haitian immigrants, called on Trump to apologize, saying his comments were “unkind, divisive, elitist, and fly in the face of our nation’s values.”

The Trump administration announced Monday that as many as 200,000 Salvadoran immigrants living in the United States will no longer be allowed to stay because they have decided to end their protected status.

The administration’s decision to end special status for Salvadoran immigrants has emerged as a possible bargaining chip for the president as he works to strike a deal with Congress on immigration.

A bipartisan group of six senators said Thursday afternoon they reached “an agreement in principle” with each other on immigration, including a plan to shield illegal immigrations brought to the United States as children from deportation, though it’s unclear if Trump or others in Congress will go along with it.

“The President will only accept an immigration deal that adequately addresses the visa lottery system and chain migration – two programs that hurt our economy and allow terrorists into our country,” Shah said.

Shah added: “Like other nations that have merit-based immigration, President Trump is fighting for permanent solutions that make our country stronger by welcoming those who can contribute to our society, grow our economy and assimilate into our great nation. He will always reject temporary, weak and dangerous stopgap measures that threaten the lives of hardworking Americans, and undercut immigrants who seek a better life in the United States through a legal pathway.”

The comments followed a recent report in the New York Times that Trump said the people of Haiti “all have AIDS” and the people from Nigeria would never “go back to their huts” in Africa after receiving visas to enter the United States. But White House press secretary Sarah Sanders said at the time that the report was false.

Sanders said senior staffers who were “actually in the meeting deny these outrageous claims and it’s both sad and telling the New York Times would print the lies of their anonymous ‘sources’ anyway.”

What is it that makes a geographic area, whether it be an American City or a Foreign Country a “s—hole”?

Is it the color of the skin of the area’s population?

Or rather, it is the decades of poor political leadership, resulting from the avarice and lack of stewardship from those who have either been chosen or who have chosen themselves to be the leader of that area?

For example, the city of Detroit has been labeled a s—hole in the past because of decades of poor Democratic Leadership, which resulted in both businesses and taxpayers leaving the city.

Without a strong economic base, the revenue required to bring stability to an area, including providing for those in the population who can’t or won’t provide for themselves ceases to exist, resulting in an impoverished area unable to pick itself up by its bootstraps in order to be a strong and healthy city…or nation.

When it comes to the countries whom the president referred to as s—holes, it is reasonable that their citizens would want to leave them to make a better life for themselves and their families.

The problem is, as found during the previous Administration, these immigrants are coming to out country and taking advantage of our social programs, without, in many cases, contributing anything to the Sovereign Nation which welcomed them with open arms.

By ending the programs like protected status countries, Visa Lottery, and chain migration, the Trump Administration will be able to make it more difficult for those who have no wish to contribute to our nation, but rather to take advantage of or commit terrorist acts within it, to enter our borders.

Ever since Donald J. Trump announced that he was running for President of the United States of America, Liberals/Progressives/Democrats have attempted to paint him as a racist, oblivious to the fact that not only did he employ Americans of every ethnic background in his corporations, he had never been labeled a racist in his long and distinguished life….until he entered politics.

Unfortunately, this will not be the last time that Democrats attempt to portray the president as being racist.

However, have you noticed that they have not uttered a mumblin’ word about the fact that Black Unemployment in America is down to a record low under President Trump’s leadership?

About this Racism Thing…as Michael Jackson used to sing…perhaps Democrats should start with “The Man in the Mirror”.