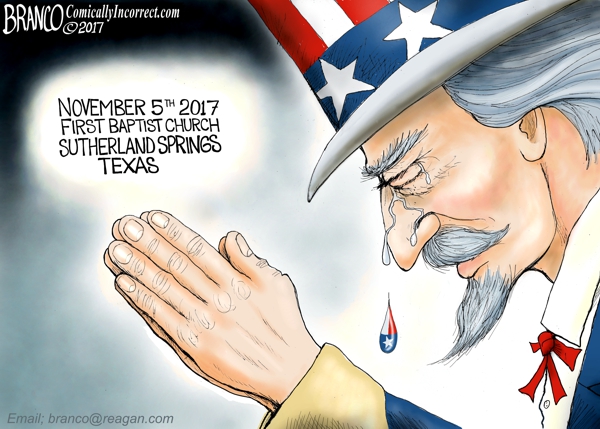 You won’t get gun control by disarming law-abiding citizens. There’s only one way to get real gun control: Disarm the thugs and the criminals, lock them up and if you don’t actually throw away the key, at least lose it for a long time… It’s a nasty truth, but those who seek to inflict harm are not fazed by gun controllers. I happen to know this from personal experience. – Ronald Reagan

Whenever there is a mass homicide in America, Democratic Politicians, in some sort of obscene genetic pavlovian response, begin calling for honest Americans guns to be taken away.

Sen. Chris Murphy (D-Conn.) has been a leading voice for gun control after just about every recent mass shooting, ever since it was his state that was struck in 2012 by the massacre at Sandy Hook Elementary in Newtown.

But Murphy’s response to the latest tragedy — in Sutherland Springs, Tex. — is a little different even for him. It is a dark and ominous statement that at times feels somewhat resigned but also makes a point of arguing that we shouldn’t be resigned. In that way, it’s somewhat similar to how President Barack Obama spoke about mass shootings late in his term. Murphy, though, takes it even further, painting a vivid and stark picture of the “paralysis” we have faced after mass shootings and talking about “the blood that flows endlessly onto the floors” of the scenes of such attacks. And for all of it, he blames lawmakers who have sold out to the NRA.

Below is his full, four-paragraph statement, with some analysis interspersed:

“The paralysis you feel right now — the impotent helplessness that washes over you as news of another mass slaughter scrolls across the television screen — isn’t real. It’s a fiction created and methodically cultivated by the gun lobby, designed to assure that no laws are passed to make America safer, because those laws would cut into their profits. My heart sunk to the pit of my stomach, once again, when I heard of today’s shooting in Texas. My heart dropped further when I thought about the growing macabre club of families in Las Vegas and Orlando and Charleston and Newtown, who have to relive their own day of horror every time another mass killing occurs.

None of this is inevitable. I know this because no other country endures this pace of mass carnage like America. It is uniquely and tragically American. As long as our nation chooses to flood the county with dangerous weapons and consciously let those weapons fall into the hands of dangerous people, these killings will not abate.”

“These killings will not abate” and the “paralysis” lines both hark back to how Obama talked. After multiple failed efforts to persuade Congress to act on gun control, he and his White House admitted that the will simply wasn’t there.

After a 2015 shooting in Oregon, White House press secretary Joshua Earnest said the president was “quite realistic that we’ll need to see a fundamental change in terms of the way the American people communicate this priority to Congress before we’ll see a different outcome in the legislative process.”

Months earlier, after the mass shooting at a historically black church in South Carolina, Obama said: “At some point it’s going to be important for the American people to come to grips with it, and for us to be able to shift how we think about the issue of gun violence collectively.”

“As my colleagues go to sleep tonight, they need to think about whether the political support of the gun industry is worth the blood that flows endlessly onto the floors of American churches, elementary schools, movie theaters, and city streets. Ask yourself: How can you claim that you respect human life while choosing fealty to weapons-makers over support for measures favored by the vast majority of your constituents.”

Here, Murphy pins the “blood that flows endlessly onto the floors” directly on lawmakers who have opposed gun control. He suggests that those who claim to be “pro-life” aren’t following through on it on this particular issue.

“My heart breaks for Sutherland Springs. Just like it still does for Las Vegas. And Orlando. And Charleston. And Aurora. And Blacksburg. And Newtown. Just like it does every night for Chicago. And New Orleans. And Baltimore. And Bridgeport. The terrifying fact is that no one is safe so long as Congress chooses to do absolutely nothing in the face of this epidemic. The time is now for Congress to shed its cowardly cover and do something.”

The inclusion of Chicago here is noteworthy. Republicans have long held up the carnage in the Windy City as proof of Democrats’ selective outrage on gun violence, given the strict gun-control laws that exist there. Here, Murphy suggests it’s part of the epidemic of mass shootings — even as the shootings don’t claim as many victims all at once.

Murphy also calls for his colleagues to shed their “cowardly cover and do something.” It’s worth noting that it has been weeks since Las Vegas, after which there seemed to be bipartisan agreement — including from the NRA — about regulating bump stocks, which basically serve to turn a semiautomatic weapon into a fully automatic one. And the bill was only recently introduced.

Texas would seem less conducive to immediate gun-control legislation. The shooter, according to Texas Gov. Greg Abbott (R), had been denied a gun permit, for example, which suggests that this wasn’t a matter of a lack of background checks. The shooter was also stopped by an armed civilian — a fact gun-rights supporters will emphasize. The NRA often argues that the best way to stop a bad guy with a gun is a good guy with a gun.

In other words, it seems unlikely that Murphy’s plea and this particular incident will change much of anything. But Murphy also seems to know that.

Uh huh. That’s because he’s a Liberal Democrat and he just can’t help himself.

The Chicago Tribune reports that

Chicago is close to recording its 600th homicide for the year, only the second time the city will have reached the grim milestone since 2003, according to data kept by the Tribune. After a weekend when 30 were people shot, five of them fatally, the number of homicides stands at 593 this year, according to the Tribune’s database.

That’s below the 681 homicides this time last year but substantially above other recent years.

Last year saw gun violence at levels not recorded since the late 1990s.  This year has not been as bad, but the last time the city hit 600 homicides was 2003, and that was for the entire year, according to statistics kept by the Chicago Police Department.

The Chicago Police Department’s count of homicides this year is 581 because, unlike the Tribune, it does not count homicides on expressways as well as fatal shootings by police officers and homicides considered justified.

Among those shot over this past weekend was a 14-year-old boy, who was grazed in the right foot and leg on Saturday afternoon. He and a 22-year-old man were fired at from a black sedan in the 2200 block of South Oakley Avenue in the West Side’s Heart of Italy neighborhood.

In another double shooting late Saturday night, a 37-year-old woman was killed while attending a party to celebrate what would have been the birthday of a man killed in August as he left the Cook County criminal courthouse.  A 25-year-old man was also shot and injured.

Chicago has some of the strictest gun laws in the country.

And yet, people are still shooting and killing one another.

Which proves the old saying,

If you outlaw guns, only outlaws will have guns.

Have you ever watched a mother, when their toddler bumps their head on a table, attempt to distract their child, by pretending to spank the table, while saying, “Bad Table”?

That, in a nutshell, is what Former President Barack Hussein Obama attempted to do by writing Executive Orders and what current Congressional Democrats are calling for, in an attempt to limit the Constitutional Right of American Citizens to own guns.

By creating new restrictions, instead of enforcing gun laws which are already in place, these clueless Democratic Politicians are shifting the blame from those who operate outside of the law to America and her citizens.

The Democrats’ quest for “Gun Control”, if successful, would only succeed in controlling law-abiding American Citizens, instead of punishing those who operate outside of our laws, such as the thugs who have turned Former President Obama’s “hometown” of Chicago and my hometown of Memphis into their own personal “Killing Fields”.

The problem in cities like Chicago and Memphis is not that there are not enough gun laws. The problem is the gun laws on the books are not properly enforced.

The dissolution of the Black Family Unit, the revolving door state of our Municipal Justice Systems, and, in the case of the Sutherland Springs Massacre, the lack of recognition and treatment of the mentally ill, have a lot to do with the rise of homicides in those Metropolitan areas, as well.

What Liberals have never understood, in their continuous quest to take away the Second Amendment rights of average Americans is that we will never surrender our Constitutional Right to defend ourselves and our families from enemies foreign and domestic.

What part of the words quote “shall not be infringed” do you Liberals not understand?