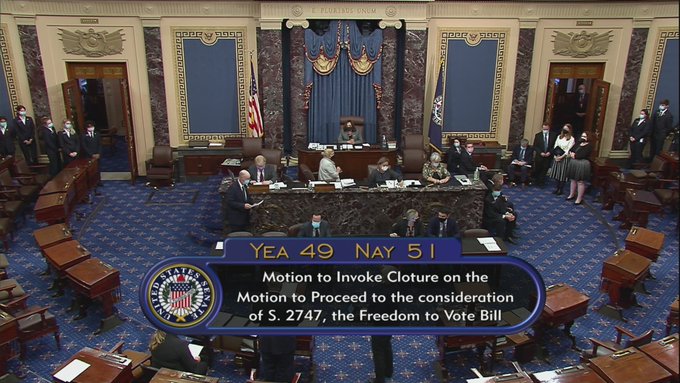 The Democrats’ Freedom to Vote Act is a Trojan Horse for Democrats taking over elections to solidify power for the next hundred years.

“Squad” member Rep. Ilhan Omar, D-Minn., said any Senate Democrats standing in the way of eliminating the filibuster “are killing our democracy.”

Omar lashed out at her upper chamber counterparts who have stood against progressive calls to nix the filibuster, accusing them of being the death knell of democracy.

“The filibuster—and the Democratic Senators who continue to uphold it—are killing our democracy,” she tweeted on Wednesday.

The filibuster is a Senate procedure in which a senator or group of senators debate a bill for so long that the measure does not get voted on. The procedure gives the minority party in the Senate a strong oppositional voice, with a Senate filibuster being broken by a cloture vote with 60 votes in favor.

Wednesday’s filibuster is the third time this year that Senate Republicans have blocked the Democrats’ voting overhaul agenda.

Progressives have been staunch in their calls for the abolition of the filibuster, although moderate Democrat Sens. Joe Manchin of West Virginia and Kyrsten Sinema of Arizona have opposed the removal of the Senate procedure.

The Senate voted 49-51 on whether to take up the “Freedom to Vote Act,” falling far short of the 60 votes required to overcome a GOP filibuster. Senate Majority Leader Chuck Schumer, D-NY, switched his vote to a “nay,” in a procedural move that will allow him to submit the legislation for a re-vote.

President Biden slammed Republicans for blocking consideration of the voting rights legislation in a scathing statement, arguing the right to vote is “under unrelenting assault by proponents of the Big Lie and Republican Governors, Secretaries of State, Attorneys-General, and state legislatures across the nation.”

The Democrats continue to overplay their hand.

Lost in their arrogant euphoria over the rigged results of the 2020 Presidential Election and their gains in Congress, they believed that they could do anything…including passing a bill into law which would ensure that they remained in power in Washington forever.

The Democrats truly believe that, like all of the other Marxists who were determined to “radically change” the government of their country and succeeded, that they will be successful, too.

There is a very important roadblock standing between the Democrats and their quest for “Radical Change”.

The difference between, say, a country like Venezuela, which was once a beautiful capitalist nation, and the United States of America, is the System of Checks and Balances which our Founding Fathers, in their brilliance, put into place to prevent wannabe tyrants, such as the Far Left Democrat Elite, from turning our Constitutional Republic into something that it was never meant to be.

That is not to say that the Democrats will not keep trying to change our Republic into a “Democratic Socialist” (i.e., MARXIST) country.

However, they will find it much harder to do thanks to the precious document that is the United States Constitution.

Thanks to that document, the power of this great nation does not reside in the Washington, D.C, Beltway, the Northeast Municipalities, or the West Coast.

America’s power is equally shared by its citizens in every state in the union.

Everybody who is a citizen of the United States of America, that is.

The Democrats tried to cheat their way around that fact.

That is why they are so feverishly attempting to stop the 2020 Presidential Election Audits which continue to spring up, as in the case of Arizona.

If there was nothing to hide, why would they care is a state audited their votes which were counted in the 2020 Presidential Election?

When it all comes down to what Americans are watching transpire, these same political shenanigans have occurred whenever Marxists attempt to take over a Sovereign Nation’s sitting government.

The biggest problem that these Marxists who are calling themselves Democrats face in keeping them from succeeding with their mission of “radical change” is the fact that that there are more Patriotic Americans than there are “Useful Idiots”…like Rep. Ilhan Omar.