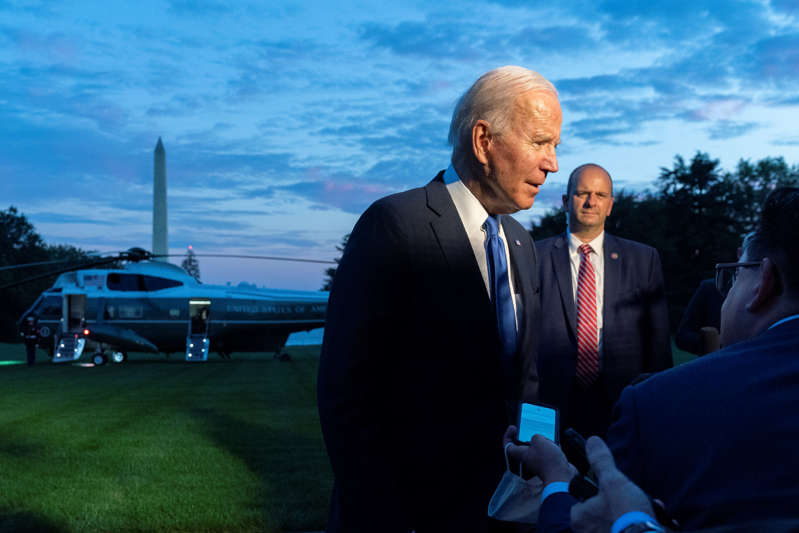 A massive investigation, the January 6th commission begins its endless hearings. What about the 270 far more violent 2020 riots? When do the BLM, ANTIFA riots, looting, arson trials begin?

President Joe Biden said on Friday the Justice Department should prosecute people who defy subpoenas to testify before a congressional select committee probing the deadly Jan. 6 assault on the Capitol.

“I hope that the committee goes after them and holds them accountable,” Biden said, referring to the House of Representatives Select Committee investigating the riot.

Asked whether he believed the Justice Department should prosecute, Biden told reporters, “I do, yes.”

The committee plans to vote on Tuesday on adopting a contempt of Congress report against Steve Bannon, a longtime adviser to former President Donald Trump who has not complied with the committee’s subpoena.

Trump urged former aides to refuse to cooperate, citing executive privilege, which legal experts in turn dispute and Biden has refused to acknowledge.

If the committee approves the contempt case against Bannon, it will go to a full House vote. From there, the Justice Department and Attorney General Merrick Garland would decide whether to pursue prosecution.

In response to Biden’s remarks on Friday, a Justice Department spokesperson told ABC News that the department “will make its own independent decisions in all prosecutions based solely on the facts and the law.”

Hundreds of protesters stormed the U.S. Capitol building on Jan. 6 in an unsuccessful attempt to overturn Trump’s election defeat by Biden. Several deaths, injuries and Capitol officer suicides have been linked to the event.

The above article was courtesy of Thomson/Reuters.

You can tell by the Liberal Slant.

IN his demented state, Biden has a lot of nerve, considering that Harvard Law Professor Jonathan Turley has called for a special prosecutor to investigate Hunter Biden, James Biden, and Joe Biden’s lucrative Foreign Affairs “Consulting” Business, along with the infamous laptop.

Not only is #BareShelvesBiden attempting a misdirection play, Pelosi is covering her a@@, also.

Simple. She is covering her a@@.

As anyone who has halfway been paying attention knows, House Speaker Nancy Pelosi is in charge of the Capitol Police, who opened the doors for the rioters to enter the Capitol Building.

Now, boys and girls, I’m just spit-balling here, but there a several things that just do not add up in Pelosi and the Democrats’ version of what happened on January 6, 2021.

And, why did Pelosi and McConnell block the request for 10,000 National Guard Troops from President Trump, himself?

Oh, and why did the Capitol Police Officers guarding the Capital Building let the rioters in?

This is nothing but a Kangaroo Court presided on by a bunch of hypocrites trying to  divert Americans’ attention from the fact that they are in the midst of radically changing our Constitutional Republic into a Marxist Nation.