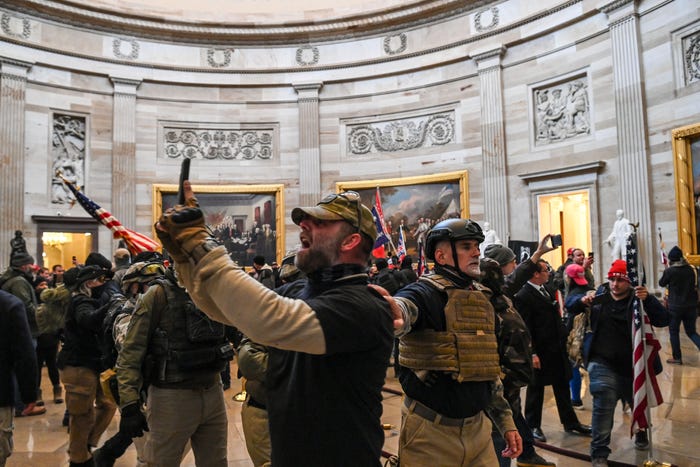 Hundreds of Americans are abandoned in Afghanistan.

$85 billion in military equipment has gone to the Taliban.

The congressional committee investigating the Jan. 6 assault on the Capitol is steeling itself for its first encounter with an immovable object: Donald Trump.

Some aspects of its work are proceeding smoothly. The panel has held its first closed-door transcribed interviews with willing witnesses, according to sources familiar with those efforts, and new ones are scheduled for this week.

But even as it digs into what exactly happened and at whose behest, the select committee is preparing to slam into a wall of resistance in a few days — an anticipated effort by Trump and his allies to defy the Jan. 6 probe.

The former president has a fast-approaching deadline to attempt to block the National Archives from releasing records from his White House that could shed light on his attempts to overturn the 2020 election results. And some of Trump’s closest aides have until Thursday to comply with a committee subpoena for their own records.

For a panel that has worked briskly but methodically to gather records from federal agencies and scoop up voluntary testimony from friendly witnesses, the expected fight from Trump is likely to be the first test of its legal and political muscle.

“I think it would be a mistake to say that we aren’t prepared for all of these eventualities,” said Rep. Pete Aguilar (D-Calif.), one of the panel’s seven Democrats.

“We’ll do whatever the law allows us to do,” said Thompson, when asked about how the panel would handle it if Meadows and others rejected any cooperation. | Brendan Smialowski-Pool/Getty Images

One tripwire will come Thursday, when subpoenas to former White House Chief of Staff Mark Meadows, longtime Trump aide Dan Scavino and Trump-world figures Steve Bannon and Kash Patel require them to supply documents to the panel. Committee Chair Bennie Thompson (D-Miss.) said Friday that he was prepared to issue “criminal referrals” to anyone who defied deadlines.

None of the four has publicly signaled how they will respond to the subpoena, and Patel has issued a statement criticizing the committee’s process. Repeated inquiries to representatives for Trump and to members of his inner circle about how they intend to respond have gone unanswered.

But committee members expect that these witnesses won’t willingly cooperate — one of the reasons the panel issued subpoenas without offering them a chance to voluntarily provide documents or testimony.

“The committee is determined to follow every conceivable end,” said Rep. Jamie Raskin (D-Md.). “There were literally thousands of people involved in these events. So we’re convinced that the truth is going to come out.”

Lets talk about “truth” for a moment.

Per John Solomon at JustTheNews.com…

Rep. Bennie Thompson, the Mississippi Democrat who chairs the congressional commission investigating the Jan. 6 Capitol riot, has been a vocal critic of an event he deems an insurrection and offered his sympathy to the police officers injured that day. He’s even gone as far as to sue former President Donald Trump for responsibility for the melee.

But as a young African-American alderman in a small Mississippi community in 1971, Thompson placed himself on the opposite side, openly sympathizing with a secessionist group known as the Republic of New Africa and participating in a news conference blaming law enforcement for instigating clashes with the group that led to the killings of a police officer and the wounding of an FBI agent. Thompson’s official biography makes no reference to the separatist RNA.

Thompson’s affection for the RNA and its members — which FBI counterintelligence memos from the 1970s warned were threatening “guerrilla warfare” against the United States — was still intact as recently as 2013, when he openly campaigned on behalf of the group’s former vice president to be mayor of Mississippi’s largest city.

The congressman’s advocacy on behalf of RNA — captured in documents, newspaper clippings and video footage retrieved from state, FBI and local law enforcement agency archives — is a pointed reminder that some of the far-left figures of a half century ago are now the Democratic Party’s establishment leaders, their pasts now a fleeting footnote in the frenzied vitriol of modern-day Washington.

Now, boys and girls, I’m just spit-balling here, but there a several things that just do not add up in the Democrats’ version of what happened on January 6, 2021.

And, why, did Pelosi block the request for 10,000 National Guard Troops from President Trump, himself?

Oh, and why did the police officers guarding the Capital Building let the rioters in?

As shown in John Solomon’s article above, the Far Left Radical Democrats are hardly in a position to judge others concerning resistance against the Government of the United States of America.