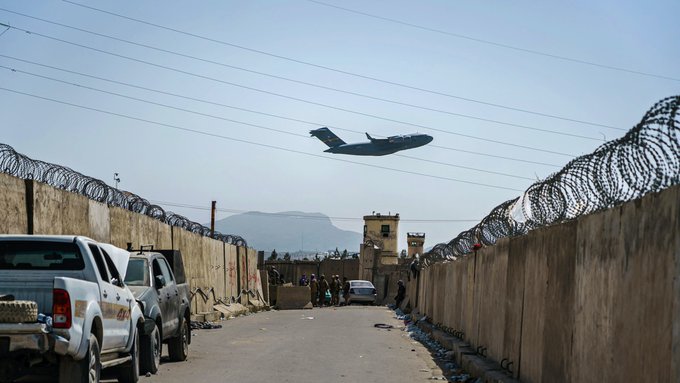 Biden is responsible for the slaughter of American service members, outfitting the deadliest terrorists in the world with advanced weapons, and abandoning U.S. citizens behind enemy lines. He betrayed his oath – his nation. That is the definition of treason.

President Biden appears to have broken his promise to stay in Afghanistan until every American is evacuated.

Marine Corps Gen. Kenneth F. McKenzie Jr. announced Monday evening that the last of the U.S. troops stationed at the Kabul airport had left, completing the military’s drawdown in the country, even though hundreds of Americans likely remain.

“We did not get everybody out that we wanted to get out,” he said.

President Joe Biden told ABC News’ George Stephanopoulos during an interview on Aug. 18 that the U.S. military objective in Afghanistan was to get “everyone” out, including Americans and Afghan allies and their families.

“That’s what we’re doing now, that’s the path we’re on. And I think we’ll get there,” he said. “If there’s American citizens left, we’re gonna stay to get them all out.”

A senior State Department official told Fox News on Monday that there is still a “small number” of Americans who are in Afghanistan.

That official put the number of Americans at “below 250,” adding that some additional Americans have departed Afghanistan in recent hours. The official added that the State Department is also committed to evacuating “those who worked with us,” referring to Afghan “partners.”

The announced end of the withdrawal comes less than a day before the official deadline agreed to by the Taliban, which was 3:29 p.m. EST Tuesday – 11:59 p.m. local time in Kabul, U.S. defense officials told Fox News.

The Taliban has said they will allow normal travel after the U.S. withdrawal is completed on Tuesday and they assume control of the airport.

One of the advantages of being **cough** older, is that I remember when Americans were left behind in the middle of another Middle Eastern “Revolution”.

Are you old enough to remember the Iranian Hostage Crisis? If not, here is a summary, courtesy of u-s-history.com:

On November 4, 1979, an angry mob of some 300 to 500 “students” who called themselves “Imam’s Disciples,” laid siege to the American Embassy in Teheran, Iran, to capture and hold hostage 66 U.S. citizens and diplomats. Although women and African-Americans were released a short time later, 51 hostages remained imprisoned for 444 days with another individual released because of illness midway through the ordeal.

…Upon the death of the shah in July [1980] (which neutralized one demand) and the Iraqi invasion of Iran in September (necessitating weapons acquisition), Iran became more amenable to reopening negotiations for the hostages’ release.

In the late stages of the presidential race with Ronald Reagan, Carter, given those new parameters, might have been able to bargain with the Iranians, which might have clinched the election for him. The 11th-hour heroics were dubbed an “October Surprise”* by the Reagan camp — something they did not want to see happen.

Allegations surfaced that William Casey, director of the Reagan campaign, and some CIA operatives, secretly met with Iranian officials in Europe to arrange for the hostages’ release, but not until after the election. If true, some observers aver, dealing with a hostile foreign government to achieve a domestic administration’s defeat would have been grounds for charges of treason.

Reagan won the election, partly because of the failure of the Carter administration to bring the hostages home. Within minutes of Reagan’s inauguration, the hostages were released.

In sharp contrast, the 46th President of the United States of America, Joe Biden, has just, whether intentionally or unintentionally, armed wild-eyed Radical Islamic Terrorists with $2 billion worth of American Military Weapons, including helicopters and left hundred of Americans behind to be killed or taken hostage.

WTH were Biden’s Handlers thinking when they told him to ignore his Military Advisors and take our Armed Forces out of Afghanistan before he took American citizens and our Afghan Allies out?

I realize that, at this point in his battle against dementia, Biden is just an empty vessel, who cannot speak without first receiving instructions through his earwig.

However, shouldn’t some little sliver of neurons lift in his cranium have fired off, telling him what would happen if he abandoned Americans to the “mercy” of the Taliban?

I haven’t seen a move this stupid since “Tommy’s parents left him at home to be baby-sat by “Wicked Uncle Ernie” (look it up, kids).

I realize that, Bidden will not be impeached as long as Nancy Pelosi remains the Speaker of the House of Representatives,

However, if there was EVER a president that needs to be boot out of the front door of the White House, it is Sleepy Joe Biden.

How callous can the Democrats who are handling him and advising him be?

Their arrogance and their distancing themselves from us “Deplorables” has erased whatever Patriotism and Common Sense they ever had.

I can only imagine what our Founding Fathers would have done to tis irresponsible, anti-American bunch of cowards.

May God protect those Americans whom Biden and Company have left behind.