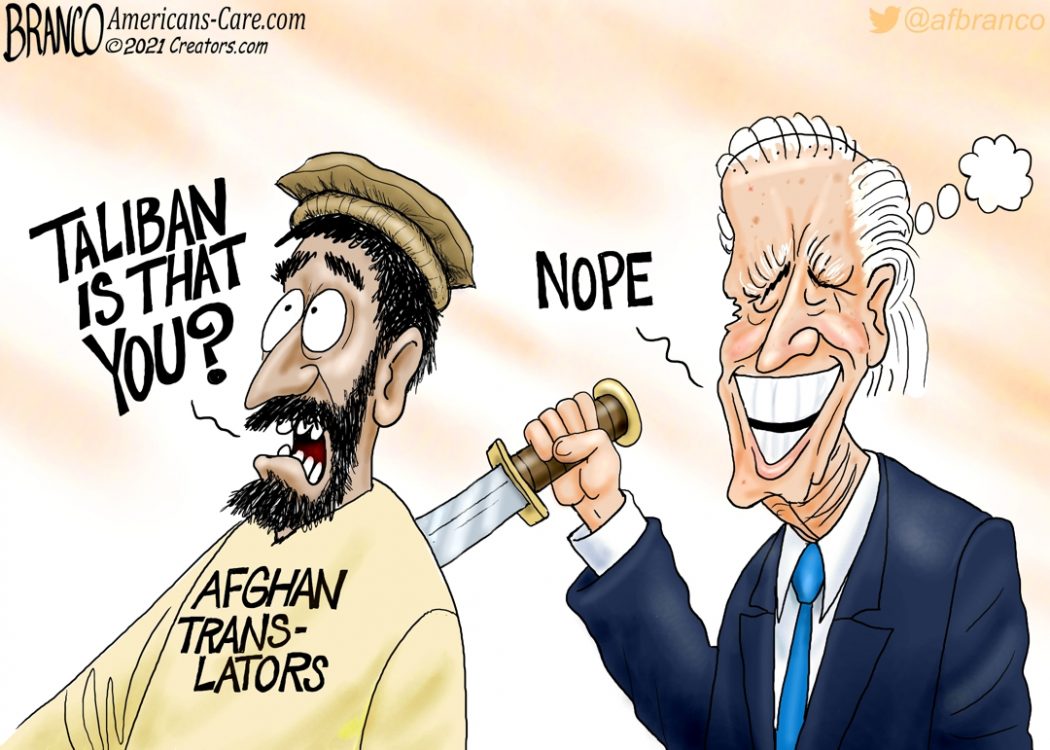 If China were to hatch a plan from within the United States to weaken us on the global stage, make our allies question our allegiances and our resolve, and embolden our enemies… Could they possibly do any better than what Joe Biden is currently doing? #BidenIsADisgrace

President Joe Biden said Tuesday the United States intends to complete its pullout from Afghanistan by August 31 and needs to withdraw rapidly because of a growing risk of terrorist attacks.

“The sooner we can finish, the better,” Biden said of the plan to evacuate Americans, Afghan nationals and US troops from Taliban-controlled Kabul.

“Each day of operations brings added risk to our troops.”

The US president said he had discussed the evacuation with Group of Seven leaders earlier Tuesday and they agreed to “continue our close cooperation to get people out as efficiently and safely as possible.”

“We are currently on the pace to finish by August 31,” said Biden, who has been under pressure from some European leaders to extend the deadline to ensure the evacuation of everyone who is seeking to flee the country.

He said meeting the August 31 deadline was contingent “upon the Taliban continuing to cooperate and allow access to the airport for those who we’re transporting out.”

“I’ve asked the Pentagon and the State Department for contingency plans to adjust the timetable should that become necessary,” Biden added.

The Taliban have been “taking steps to work with us” so far, Biden said, but there is an “acute and growing risk of an attack by a terrorist group known as ISIS-K,” or Islamic State-Khorasan.

“Every day we’re on the ground is another day we know that ISIS-K is seeking to target the airport and attack both US and allied forces and innocent civilians,” he said.

US-led troops have ramped up operations to get thousands of people out of Kabul by August 31 — the deadline set by the US before the fall of the capital for all foreign troops to have pulled out.

Biden said the United States has evacuated 70,700 people since August 14 — the day before the Taliban took power in Kabul — including 6,400 in the past 12 hours.

US officials said more than 4,000 Americans were among those flown out of Hamid Karzai International Airport in the Afghan capital.

Several thousand other people have been evacuated by allied European nations, such as Germany and the United Kingdom.

The Taliban urged skilled Afghans not to flee the country on Tuesday and warned the United States and its NATO allies they would not accept an extension to the evacuation deadline.

Gentle Readers, think for a moment how the leadership of this Sovereign nation has changed in just a few short months.

We have literally gone from a Commander-in Chief who sincerely loved this country and her people to a Coward-in-Chief who have surrendered to the Taliban, the same Radical Islamic Terrorists who killed over 3,000 Americans almost 20 years ago on September 11, 2001.

How far we have come…in the wrong direction.

Carter only allowed 52 Americans to be held hostage by Radical Islamists.

Biden is about to allow thousands of Americans to be either held hostage or beheaded on international television for the world to see how weak America has become.

How did we get here?

Whose fault is it?

It is the fault of the Far Left Democratic Party, who were so desperate to regain the White House that they were forced to nominate a doddering old fool in the throes of dementia because all of the other primary candidates had the personality of a cardboard cutout.

To add to the problem, the professional politician that they chose had a 40 year track record of making horrible Foreign Policy decisions.

And, even though Biden ran as a Moderate, he has governed as a Far Left Radical Socialist, even taking a knee at the White House with the NBA Champions.

All of our enemies, foreign and domestic, must be throwing a party.

The Democrats installed Neville Chamberlain on Steroids as President of the Greatest Country on God’s Green Earth.

The Democrats are about to set the Free World on fire.