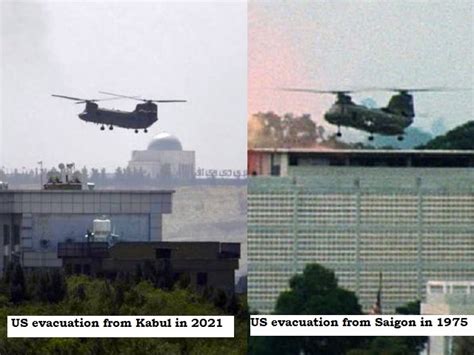 This morning, as I watched events unfold in Kabul, Afghanistan, I recalled the end of the Vietnam War and the fall of Saigon, as chaos ensued and Army Helicopters got the last American Citizens and Soldiers out of that war-torn city, as it fell to the Communists.

I watched in a feeling of disgust and déjà vu as Afghanis clung to the fuselage of American Planes in a desperate bid to secure their own freedom and safety from the Taliban…because if they did not they would most certainly meet their end aflame or beheaded.

Meanwhile, as the citizens of Afghanistan were in the fight of their lives, the so-called Leader of the Free World safety sat at a table in Camp David having his morning bowl of Oatmeal not knowing what to do…or even where he was..

Immediately, as things started to fall apart, Liberal Pundits and Trolls like Jennifer Ruben from the Washington Post, started to try to blame Trump for the situation, even though the entire world knows that this is Biden’s mistake…one which has led to a Foreign Policy Disaster.

However, as I sit here thinking about this whole terrible moment in our country’s history, this is not just the fault of Biden. This is the fault of everyone who voted for the demented old idiot.

And, as I sit here writing this, Fox News has just reported that Biden is going to speak at 2:45 Central Time this afternoon. What is he going to say? Oops?

I’m betting that they, like the majority of average Americans, could go for a Mean Tweet, a growing economy, a stable Middle East, and a strong American President right about now.

Lord knows, I could.

One thought on “The Fall of Afghanistan: Saigon Déjà Vu”