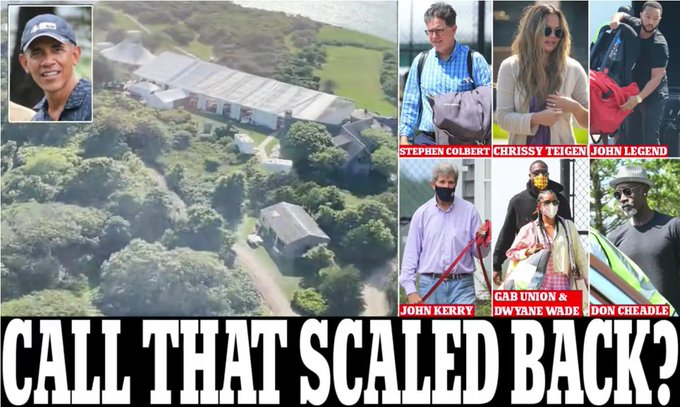 This is the tent for Obama’s “scaled back” birthday party where only close friends & family were said to attend. Instead, multiple celebrities & politicians were seen

Why is it that the same people telling you to stay home & social distance don’t think those rules apply to them? pic.twitter.com/MVIBbx29HI

Celebrities and a massive tent were spotted in Martha’s Vineyard for former President Obama’s 60th birthday that his office said was “scaled back” to include just close friends and family amid concerns over the Delta coronavirus variant.

Obama’s team had originally planned a lavish birthday with over 500 guests expected to attend but announced this week the party would be “scaled back” amid criticisms over holding such an event while the Delta coronavirus variant was surging across the country.

“Due to the new spread of the delta variant over the past week, the President and Mrs. Obama have decided to significantly scale back the event to include only family and close friends. President Obama is appreciative of others sending their birthday wishes from afar and looks forward to seeing people soon,” an Obama spokesperson said earlier this week.

Some celebrities reportedly didn’t make the cut and had their invitations revoked including Larry David, David Axelrod, Conan O’Brien, and David Letterman.

Several social media users reacted to the photo of the large tent with criticism and suggested that the affair was larger than Obama’s team let on.

“This is the tent for Obama’s ‘scaled back’ birthday party where only close friends & family were said to attend,” conservative commentator Charlie Kirk tweeted. “Instead, multiple celebrities & politicians were seen.”

Kirk added, “Why is it that the same people telling you to stay home & social distance don’t think those rules apply to them?”

“Because it’s all about their wealth and power and the little people need to shut up and work and pay their taxes and do as they’re told to advance the Oligarchy’s political agenda,” former Republican Congresswoman Nan Hayworth said in response to Kirk’s tweet.

Human Events Senior Editor Jack Posobiec tweeted a picture of the event with a sarcastic caption of “Scaled Back.”

Some criticism also came from residents on the island with one local reportedly saying that Obama had expanded the definition of what constitutes a “close friend.”

“His close friends apparently include his golfing buddies, politicians, celebrities,” the local said. Those people are here on the island and I doubt he’ll be turning them all away. He wants people to think this is going to be small and intimate, but I don’t think we have the same definition of intimate.”

And, hardly  a mask in sight.

Actually, that is not at all shocking.

The Obamas and the rest of the Democrat Elite have believed themselves to be the next coming of the French Aristocracy for some time now.

I mean, look at professional bureaucrat Dr. Fauci. He is still jumping in front of every cable news camera he can find, trying to somehow remain relevant, even though no one but the Democrats are listening to him anymore.

And, even some of them are beginning to wake up…those whom the Far Left Fascists haven’t scared witless, yet.

Democrats like the Obamas and their “friends” do not believe that they are hypocrites at all, while they threaten to issue mandates ordering average Americans to wear masks and lock themselves inside their homes, even as they have hundreds of “friends” over in a “scaled back” birthday party.

Don’t you remember all of the vacations that the Obamas took to places like Hawaii and Spain using OUR Tax Money?

Mooch (Michelle) had a entourage with her on her trip to Spain numbering well over 30, including her mother.

Just like the Communists ruling the Soviet Union lived “high on the hog” while the Proletariat (Working Class) struggled, so do today’s Far Left Democrats enjoy their life of luxury while attempting to instill fear in the hearts of average Americans in order to maintain control over a populace who is beginning to wake up to their plan to radically change America into a Democratic Socialist (Communist) country.

The door-to-door “Vaccine Brown Shirts” and the threats of Mandates and lockdowns are, again, a means to control average Americans.

By the way, is it just me…or have you noticed that the “Delta Variant Surge” is cranking up just in time to interfere with the Midterm Elections?

My wife and I both got COVID-19 earlier this year and were severely sick for a month.

On the advice of our doctors, two well-respected men in the field of Internal Medicine, we took the vaccine.

But…IT WAS OUR DECISION.

Not the Biden Administration’s or anybody else on the left side of the Political Aisle.

The Democrats’ attempt to turn this nation into a Marxist Aristocracy is going to fall flat on its face.

Americans have had enough.