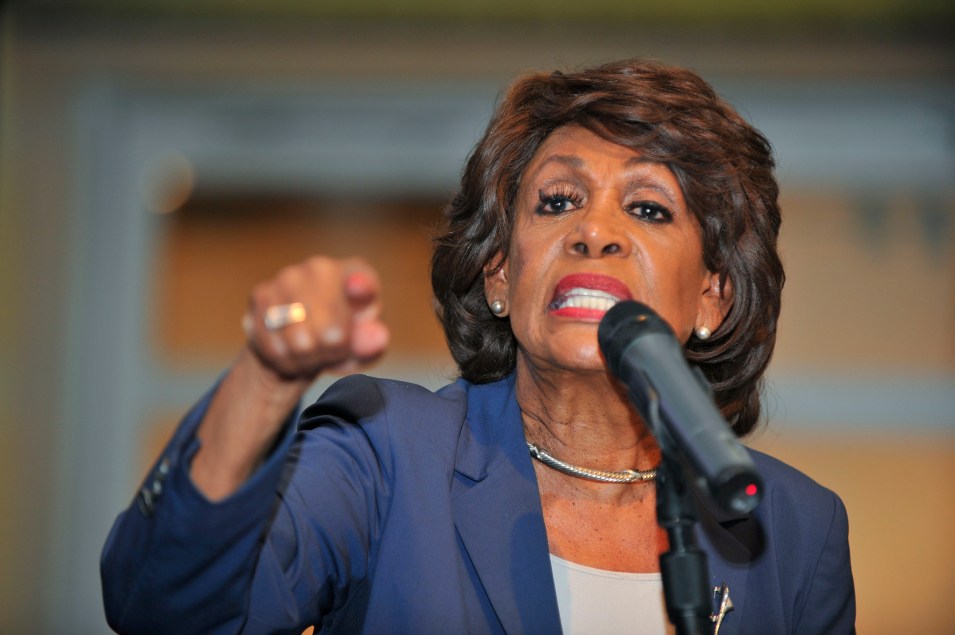 Maxine Waters is actively encouraging people to riot if Derek Chauvin is acquitted.

Isn’t this the definition of inciting a riot and violence?

She should be expelled from Congress immediately.

In a statement released by her office, Taylor Greene accused the California Congresswoman of inciting “Black Lives Matter domestic terrorists to fire gunshots at National Guardsmen in Minnesota” after she spoke in Brooklyn Center, which has become a flashpoint for protests following the fatal police shooting of Daunte Wright.

“I’ll be introducing a resolution to expel Rep. Maxine Waters from Congress for her continual incitement of violence,” a statement from Taylor Greene’s office reads.

Waters said she was “hopeful” Chauvin would be convicted of murder, but if he isn’t, “we cannot go away.”

Taylor Greene called Waters “a danger to our society,” and accused her of “traveling across state lines to incite riots.”

“Her orders recorded on video last night at the Brooklyn Center, directly led to more violence and a drive by shooting on National Guardsmen in Minnesota early this morning,” she writes.

“As a sitting United States Congresswoman, Rep. Maxine Waters threatened a jury demanding a guilty verdict and threatened violence if Chauvin is found not guilty. This is also an abuse of power,” she continued, before adding, “Rep. Maxine Waters must be expelled from Congress!”

Taylor Greene was not the only Republican to take issue with Waters’ remarks.

“The Radical Left don’t care if your towns are burning, if there’s violence in your streets, or if the police are too defunded to defend their communities. As long as the Left appeases their anti-America base, their job is done,” Rep. Andy Biggs, R-Ariz., wrote on Twitter.

“Why is Maxine Waters traveling to a different state trying to incite a riot? What good can come from this?” Rep. Lauren Boebert, R-Colo., tweeted.

Waters said she plans to stay in Minnesota until Monday when closing arguments are expected in the Chauvin trial, New York Times reporter Nicholas Bogel-Burroughs reported.

She told MSNBC that she was in Minnesota to be “auntie Maxine” and support young people of color.

“I wanted to be there as auntie Maxine to show them, not only do I love them and support them, but they can count on me to be with them at this terrible time in all of our lives.”

Waters has a history of in-your-face remarks and impassioned statements. In 2018, the California Democrat called for her supporters to “create a crowd” and publically “push back” against members of the Trump administration.

Gentle readers…do you realize what we are witnessing?

The purposeful unraveling of the safeguards which those before us have put in place in order that we might live in a society where we can feel safe to venture from our homes.

Not only that, but as the cry from the “New Bolsheviks” is becoming louder and more high-pitched to do away with traditional law and order, spineless Far Left Democrat Senators, Representatives, Governors, and Mayors are actually giving them what they want: anarchy.

Why do they want anarchy?

In an article titled “Marx, Theoretician of Anarchism, written by Maximilien Rubel in 1973, and found on Marxists.org, the writer makes the following observation…

Marxism as the ideology of a master class has succeeded in emptying the concepts of socialism and communism, as Marx and his forerunners understood them, of their original meaning and has replaced it with the picture of a reality which is its complete negation. Although closely linked to the other two, a third concept – anarchism – seems however to have escaped this fate of becoming a mystification. But while people know that Marx had very little sympathy for certain anarchists, it is not so generally known that despite this he still shared the anarchist ideal and objectives: the disappearance of the State. It is therefore pertinent to recall that in embracing the cause of working class emancipation, Marx started off in the anarchist tradition rather than in that of socialism or communism; and that, when finally he chose to call himself a “communist,” for him this term did not refer to one of the communist currents which then existed, but rather to a movement of thought and mode of action which had yet to be founded by gathering together all the revolutionary elements which had been inherited from existing doctrines and from the experience of past struggles.

…Marx developed a theory of anarchism; and further, (and) in fact it was he who was the first to provide a rational basis for the anarchist utopia and to put forward a project for achieving it.

For decades now, the Democrats have moved further and further left of the Political Spectrum until, at this point, the Democratic Party is a Far Left political entity, ridiculing, hating, and seeking to destroy America History, traditional faith and values, and, in the process, radically changing our Constitutional Republic into just another failed Democratic Socialist country.

Through the mobilization of “useful Idiots” like Antifa, Black Lives Matter, and Hollywood celebrities, private and political power brokers, like Rep. Waters, have “taken advantage of a crisis” to make their move to stoke the fires of anarchy through the use of organized riots in major American cities.

For several months now, they have used the death of George Floyd to attack and attempt to eliminate our first line of defense: “The Thin Blue Line”.

These Democrat Race-Baiting Power Brokers decided to follow the example of Vladimir Lenin, the disciple of Karl Marx, and start a revolution at the grass roots level with their own “New Bolsheviks”, “useful idiots” rioting over the promise of “shared wealth” and “radical change”.

Now that we no longer Have a strong American Patriot like President Trump in office, the Democrats’ dream of a Socialist Utopia ushered in through anarchy achieved by fiery rhetoric designed to shame Americans into not standing up to them is on the verge of becoming a reality.

They have already succeeding in having young Americans literally kiss the feet of those whom they have supposedly “offended”.

They even succeeded in causing the cancellation of “Cops” after 32 years on television and “Live P.D.”, a very popular program on A&E.

They have gone after every program which shows the police in a good light, even “Paw Patrol”!

An now, a member of the House of Representatives from California has crossed state lines to incite riots in Minnesota.

If the House Republicans do not back their threatening words with action, then they must be replaced by Republicans with spines in 2022.

It is time for America to stand up for our country…

Before it is gone.