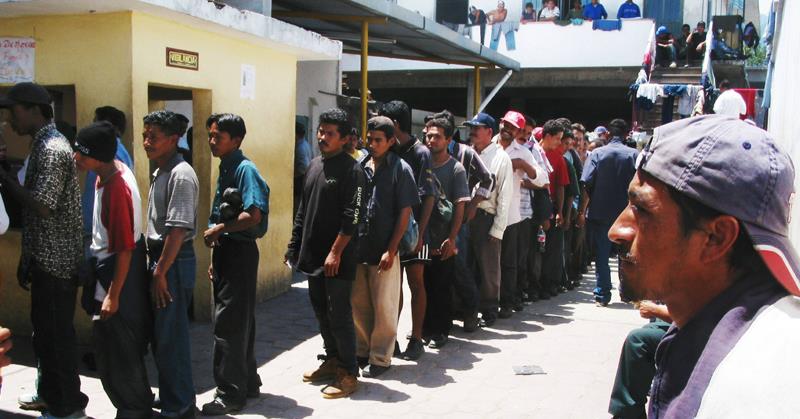 Another corporate giveaway: Biden to provide billions in welfare to non-citizens so employers can pay them less than Americans. It’s a large wealth transfer from U.S. workers to CEOs. – Stephen Miller, Twitter, 3/12/21

A coalition of 11 states are seeking to intervene in a lawsuit to challenge the Biden administration’s move to drop a Trump-era policy that restricts immigrants deemed reliant on welfare from receiving green cards.

The “public charge” rule was introduced by the Trump administration in 2019 and expanded the definition of “public charge” as an immigrant who receives one or more designated public benefits for more than 12 months within a 36-month period.

Whether an immigrant would be a “public charge” would affect their chances of getting a green card — as well as other factors such as age, health and education.

Critics said the rule was discriminatory and would disincentivize struggling immigrants from claiming the assistance they need, and launched a legal fight against the move that went up to the Supreme Court.

The Biden administration announced recently it would no longer seek to defend the rule and dropped its legal challenges.

Continuing to defend the rule “is neither in the public interest nor an efficient use of limited government resources,” DHS said in a statement.

The states, led by Arizona, filed a motion this week to intervene in the lawsuit, which would allow the states to petition the Supreme Court to accept review of the case and have the case heard in full.

“It is unconscionable to overwhelm our infrastructure and immigration personnel when we are dealing with the health and economic devastation of the pandemic,” Arizona Attorney Mark General Brnovich said in a statement. “While regardless of one’s position on immigration reform, this reckless violation of federal law is only creating another national crisis and putting additional strains on our state and hardworking Arizona taxpayers.”

The states say they have interest in upholding the rule as implementation would reduce demand on welfare and government assistance that impacts them directly.

Those benefits considered under the rule include Supplemental Security Income (SSI), Temporary Assistance for Needy Families (TANF), as well as most forms of Medicaid and the Supplemental Nutrition Assistance Program (SNAP) — commonly known as food stamps. The rule expanded the number of benefits that can be considered from interim guidance issued in 1999.

It comes days after Arizona and Montana announced a challenge to the Biden administration’s limiting of Immigration and Customs Enforcement (ICE) priorities for arrest and deportation.

So, by giving an individual, who has broken our laws, by entering our Sovereign Nation illegally, Federal Benefits, reserved to provide for the welfare of actual American Citizens, these wannabe Democratic Presidential Candidates somehow believe that they are “taking care” of dutifully executing our Nation’s Laws?

And Rosie O’Donnell has a “bikini body”. (Let that image settle in for a moment.)

Is breaking into our country, something that should be rewarded?

My concerns about the Democrats’ coddling of the illegal aliens and the often-proposed “Path to Citizenship” business, can be divided into three bullet points. (Hey, I’m a Former VP of Marketing. What do you expect?)

1. Patriotism – Will these new “citizens” be willing to fly our flag above theirs? Will they be willing, if called upon, to serve in our Armed Forces, at home or abroad? Will they love this country, more than the one they left?

2. Loyalty – When these “new Americans” achieve the right to vote, are they all going to vote Democrat, so that they can receive more FREE STUFF? Will they honestly embrace our sovereign nation as their new home? Or, will they remain loyal to their country of origin?

3.  Immigration – Are we rewarding illegal behavior, while at the same time, insulting all of the brave souls who have come here legally, seeking a better life for themselves and their families?

I understand that people want a better life for themselves and their children.  Our ancestors were all immigrants in this land, except for American Indians, and they got here by crossing the Bering Straight.  But there is a huge difference between immigrating here legally and sneaking in illegally, between assimilating into an existing culture, and insisting on replacing a country’s existing culture with that of the country you left.

The Far Left Democrats, both in Congress and the Biden Administration, exhibit all the symptoms of a disease that I’ve noticed that all of the Far Left exhibit: Narcissistic-Reality-Denial-Over-Educated-Beyond-Their-Intelligence Syndrome. The patient tends to rely on his self-assumed superior intellect, denying the reality of the world around him to the point of forsaking both his allegiance to and concern for the people of the country that has provided him with both his livelihood and his well-being.

This syndrome seems to be extremely pernicious in academic and political figures. The patient actually believes that he is an expert on everything, to the point where he can write and distribute instructional theses to seasoned professionals while lecturing them in a didactic manner.

The only treatment for Narcissistic-Reality-Denial-Over-Educated-Beyond-Their-Intelligence Syndrome at this time is “refudiation” and isolation. The people who are being affected by these individuals must, in a clear and over-whelming manner, let the patient know that they do not accept their attitude or actions and put them in a “time-out”.

In the case of those in Washington who wish to give illegal aliens all of the rights and “perks” of being an American citizen before they prove themselves worthy of being a solid contributor to American Society, these states, and others who might join them, seeks to put the egotistical Democrat clowns’ red noses in the corner.

Y’know…at the rate that these educated-beyond-their-intelligence, imperious, Marxism-loving, “Social Justice Warrior” buffoons keep obviously virtue-signaling about wanting to intentionally run our nation into the ground, I fully expect each and every one of them, one day soon, to respond to question at one of their press conferences, when asked about the rights and welfare of our veterans and our average hard-working American Citizens, as compared to these Future Democrat Voters whom they are coddling, to answer: