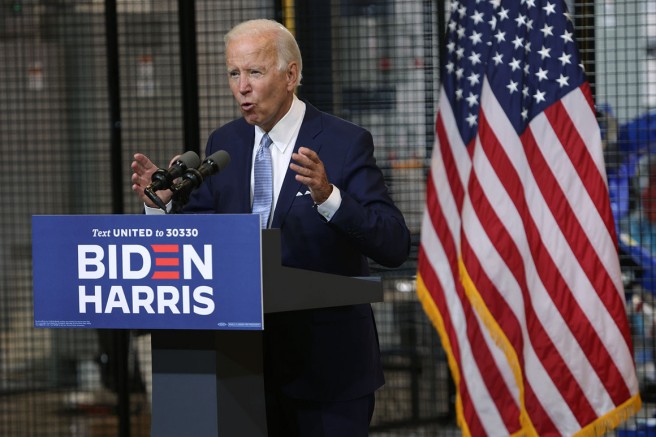 Democratic presidential nominee Joe Biden took a sledgehammer to President Trump’s emphasis on law and order amid a summer of protests and violence in many American cities, asking voters “does anyone believe there will be less violence in America if Donald Trump is reelected?”

The former vice president, speaking Monday in Pittsburgh, charged that “this president long ago forfeited any moral leadership in this country. He can’t stop the violence – because for years he has fomented it … fires are burning and we have a president who fans the flames rather than fighting the flames.”

And Biden argued that Trump “may believe mouthing the words law and order makes him strong, but his failure to call on his own supporters to stop acting as an armed militia in this country shows you how weak he is.”

Biden’s address is the first of two dueling speeches by the two presidential nominees as they trade fire this week over the unrest that has rocked cities from coast to coast this summer over police brutality and racial injustice.

The Trump campaign quickly noted that Biden on Monday did not mention or condemn the Antifa movement, which the Trump administration has blamed for much of the violent acts committed during the riots.

And Murtaugh repeated the line that “you won’t be safe in Joe Biden’s America.”

On Tuesday, the president gets his turn as he travels to Kenosha, Wis., despite pleas from the state’s Democratic governor not to come, to spotlight his emphasis on law and order in a city that was hit with violence following the police shooting a week ago of a Black man that reignited protests across the country.

The president has repeatedly warned that the unrest will only intensify if Biden’s elected in November. But the former vice president, pushing back, stressed that the current unrest is coming on Trump’s watch.

“These are not images of some imagined Joe Biden America in the future, these are images of Donald Trump’s America today,” Biden said.

And countering the president’s claims that Biden will govern like a radical, Biden emphasized “you know me. You know my heart. You know my story, my family’s story. Ask yourself, do I look like a radical socialist with a soft spot for rioters? Really? I want a safe America.”

Moments after the speech ended, the president responded on Twitter.

“Just watched what Biden had to say. To me, he’s blaming the Police far more than he’s blaming the Rioters, Anarchists, Agitators, and Looters, which he could never blame or he would lose the Radical Left Bernie supports!” he insisted.

The president’s trip to Kenosha appears to be a type of victory lap – as he’s taking credit for the calming of tensions in the city after the National Guard restored a semblance of order.

But Democratic Gov. Tony Evers had already sent some National Guard troops to the city before the president’s move.

Following Saturday’s announcement that the president would go to Kenosha, Biden has been under increasing pressure to visit the key general election battleground state as well. But Biden’s decision to speak from Pennsylvania – another crucial swing state – appears to be a move to put some space between himself and the violence that’s flared since 29-year-old Jacob Blake was shot seven times on Aug. 23, allegedly by Kenosha police officer Rusten Sheskey.

Video seen on social media shows Sheskey shooting at Blake as he reached into his vehicle, where Wisconsin officials later said a knife was found. The shooting, witnessed by his children who were in the vehicle, left Blake paralyzed from the waist down.

During the protests sparked by the shooting, a self-described militia member is accused of fatally shooting two people and wounding a third. Teenager Kyle Rittenhouse faces homicide charges in the shootings; his lawyer has claimed self-defense.

The nationwide unrest was sparked by the late May death of Black man George Floyd while in custody of police in Minnesota. Trump, who has denounced protesters as “thugs” while sharply defending the police, has throughout the summer cast American cities under liberal leadership as under siege by violent and lawless anarchy. While many of the demonstrations have been peaceful, rioting and looting has broken out in a handful of cities.

The president has been emphasizing law and order since the outbreak of protests in the late spring – tweeting and retweeting it repeatedly in recent days — and it was a major theme at last week’s Republican National Convention. The emphasis comes as Trump tries to win back suburban voters who supported him in 2016 but fled the GOP in the 2018 midterm elections.

Biden – speaking on the day that the number of new cases of the coronavirus in the U.S. topped 6 million — also slammed the president’s handling of the pandemic.

Biden capped his speech by arguing that “Trump’s been a toxic presence in our nation for four years.”

And pointing to the upcoming election, he noted that “we have a decision to make: will we rid ourselves of this toxin or will we make it a permanent part of our nation’s character.”

Biden gave his address at Mill 19, a redeveloped historic steel mill in Pittsburgh. Outside the event — which was not open to the public — roughly a hundred Biden supporters gathered.

Once again, a Democrat Politician has refused to condemn the Far Left Groups of BLM, Antifa, and Refuse Fascism for the destruction and violence which they have rained down upon our Sovereign Nation.

Like Sen. Hirono, who refused to answer the questions of Sen. Ted Cruz in a recent committee meeting, which saw her walk out, Democrat Presidential Candidate Joe Biden refused to address the problem head on.

Instead, he attacked the sitting president, a member of the opposition party, for the actions of those who aligned with members of the Far Left Democratic Party, being funded by the same Billionaire Mega-Donors.

Biden’s response to the riots was beyond weak…it was laughable.

Certainly, he does not expect Americans to actually buy what he is selling, does he?

The Democratic Candidate is a horrible poker player.

He gave away his hand when he asked…

… “does anyone believe there will be less violence in America if Donald Trump is reelected?”

Did he just admit that the Democrats are behind the riots…that they are supporting them in order to damage President Trump…and our Sovereign Nation?

It is way past time for a full-blown investigation into the funding of BLM, Antifa, and Refuse Fascism, and their ties to the Far Left Democratic Party.

Even though Press Secretary Kayleigh McEnany has said that the President does not want to do it, it is time for the President and his Administration to seriously consider invoking the Insurrection Act before more businesses are destroyed and more innocent Americans get hurt or killed.

One thought on “Biden Comes Out of Basement, Blames Trump for Far Left Riots, Warns They Will Continue if Trump is Elected”