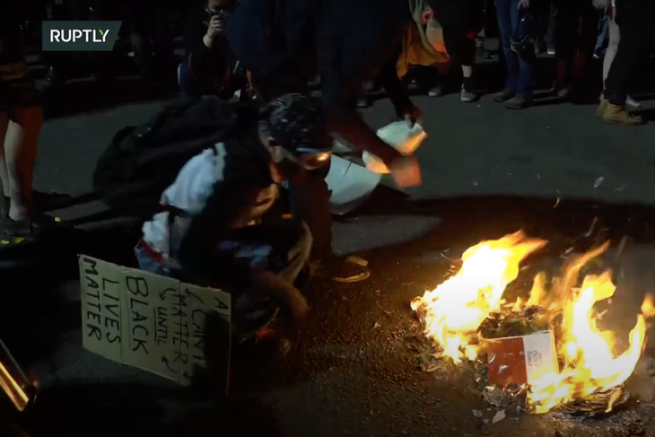 I reported last night that some people were burning Bibles at the antifa/BLM protest in Portland. Here is video: https://t.co/K5WK5qNYlA

Protesters burned an American flag and a Bible in Portland, Oregon, sparking outrage just as weeks of violent demonstrations seemed to be coming to a close.

For more than 60 days, Black Lives Matters demonstrators, including a “Wall of Moms” and a “Wall of Vets,” have clashed with federal agents in the city, drawing national attention as authorities blasted marchers with tear gas and the civilians at times responded with weapons of their own — such as feces, bleach, bricks or batteries.

Friday night’s demonstrations were largely peaceful, appearing to mark a break from the chaos as federal agents made a recent deal to allow local authorities to handle the protests.

But just after midnight, marchers were caught on video using the flag and holy book as kindling for bonfires lit outside the federal courthouse, which has been a focal point of rioting after the death of George Floyd in police custody in May, according to a news report.

“Left-wing activists bring a stack of Bibles to burn in front of the federal courthouse in Portland,” claimed Ian Miles Cheong on Twitter Saturday.

Enlarge Image A US flag is burnt next to a plastic pig in Portland, Oregon.EPA
The post featured a video which showed protestors with “Black Lives Matter” signs tossing bibles into a raging bonfire. The video, which has gone viral, had more than 1.8 million views and thousands of retweets.

“Now we move to the book burning phase,” said Donald Trump Jr. in a tweet Saturday. “I’m pretty sure ANTIFA doesn’t actually stand for what they say it stands for. Maybe just remove the anti part of [their] name and it’s perfect,” he wrote.

The fire was later put out by members of Moms United for Black Lives Matter, who doused the flames with bottles of water and stomped on the embers, according to KOIN 6, a local CBS affiliate television station in Portland.

So, what does ANTIFA stand for? What is their agenda?

On Thursday, April 27th, 2017, the following information was posted in an article found on gatewaypundit.com…

Ayers is infamous for the Weather Underground, a domestic terror organization he co-founded with other degenerates, and for bombing the Pentagon.

“Refuse Fascism“, a fascist organization that wishes to inhibit and deny the speech of conservatives, is partly funded by George Soros. It has organizers like Bill Ayers and is targeting youth across the country with the intention of indoctrinating and brainwashing individuals who nascent politically. We know Ayers was associated with Barrack Obama and is a big supporter of various socialists and communists as well as violent terrorists.

Today, it has come out that Ayers is partnering with Antifa in the spread of militant violence against pro-America demonstrators. Leftists have historically turned Ayers into a folklore figure who they cherish and respect despite his violent past.

These Antifa Idiots, have been following a well-written out plan all along.

Saul Alinsky’s “Rules for Radicals”, a favorite of the 60s counter-culture, was on the reading list of the 44th President of the United States, Barack Hussein Obama, and his First Secretary of State and Failed 2016 Democratic Party Presidential Candidate, Hillary Rodham Clinton. Let’s look at rule #8 – rule #13:

It’s very apparent from what is happening during Trump’s Presidency that somebody’s read Alinsky’s book.

In order to ensure that no leader of this new nation would go mad with power, and become a tyrannical despot, our Founders set up a System of Checks and Balances, overseen by Three Branches of Government: the Legislative, the Executive, and the Judicial, with each branch having a distinct and LIMITED role.

The situation, which we as a nation, find ourselves in today, is one which our Founding Fathers sought valiantly to avoid.

During 8 years of a Previous Imperious Presidency, we suffered under a “Tyranny of the Minority”.

This minority was not based on color, rather, it was one based on political ideology and self-interest.

As the past several years showed before the election of Donald J. Trump as President, this minority, buoyed by money from this “sponsors”, including the Halls of Power in Washington, DC, were willing to shut down anyone who threatened “what they had” by ANY MEANS NECESSARY, including political devices and beliefs, which we, as a country, had gone to war against in the past.

After watching the spoiled brats of the Antifa Movement riot in Portland for over 60 days,  I have noticed that they do not seem to grasp is that America is, as I stated earlier, a Constitutional Republic and that the overwhelming majority of Americans are Christians.

Our Presidents do not ascend into office by mob rule.

And, those bibles which they have decided to burn are considered Holy by the majority of Americans.

On a different website, you will find these words…

Where is this art of ruling, to say nothing of the art of leadership? It is only the unscrupulousness for robbery. And when this same man then says: “We have a fine instinct for idealism and material values.” Yes indeed they have. They have destroyed idealism everywhere, and they have grabbed and taken possession of material worth and always grabbed and taken possession of it, too, by brutal force only. For in 300 years that nation has oppressed and yoked and subjected nation after nation, people after people, race after race.

No, boys and girls, the following quote did not come from the Antifa Group Refuse Fascism’s website, although it certainly reads like something they would write.

This quote comes from the Jewish Virtual Library. It is taken from a speech, delivered in 1942, given on the 19th Anniversary of the “Beer Hall Putsch”, by German Chancellor Adolph Hitler.

The Beer Hall Putsch was an incident that took place on November 8, 1923, when Nazi troops under the direction of Hermann Goering surrounded the a beer hall in Munich, Germany. At 8:30 p.m., Hitler and his storm troopers burst into the beer hall causing instant panic. Hitler announced to the crowd that the Revolution had begun, and went to the back room of the hall to try to persuade the local officials to capitulate to him. They wouldn’t. Hitler’s attempt to seize power that night failed. But, thanks to word of mouth, and Hitler’s use of propaganda, a seed was planted, that would eventually lead to World War II.

By now, you are probably asking:

Okay. So what does one thing have to do the other?

Hitler eventually rose to power by preying upon the economic despair, hopelessness, and avarice of the German people, whose country was savaged by the Great Depression of 1929.

Hitler chose his nation’s Jewish Population as his scapegoat, blaming them for Germany’s plight. He soon attracted legions of young men, swayed by his propaganda, who began to march the streets of Germany, intimidating anyone who dared to disagree with them.

Hitler formed a political party, naming it The National Socialist Party, which led to he and his thugs being called “Nazis”.

The era became known as the “Rise of Fascism”.

As I have related before, according to various sources, during the Nazi Occupation of Hungary in the 1940s, the Funder of moveon.org and the never-ending protests against President Donald J. Trump by groups such as Refuse Fascism and BLM, George Soros , reported his own countrymen to the Nazis, facilitating their removal via “the long train ride from which very few ever returned”.

These Modern Day Bolsheviks are unknowingly doing the bidding of evil fascists themselves, just as the original Bolsheviks did.

The Antifa, the BLM, and all of the other radicalized “Social Organizations” are carrying out the Machiavellian Plans of a very evil man, who almost bankrupted England, and, in his long life, has stood for the very things which these “Social Justice Warriors” claim to be fighting against.

Irony is embarrassed at their idiocy.