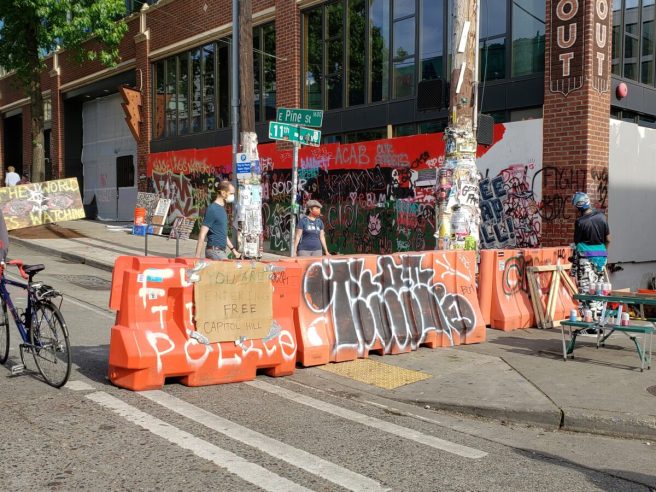 President Trump told Fox News’ Harris Faulkner in an exclusive interview Thursday that his administration is “not going to let Seattle be occupied by anarchists.”

“If there were more toughness, you wouldn’t have the kind of devastation that you had in Minneapolis and in Seattle. I mean, let’s see what’s going on in Seattle,” Trump told Faulkner. “I will tell you, if they don’t straighten that situation out, we’re going to straighten it out.”

The full interview will air on “Outnumbered Overtime” at 1 p.m. ET Friday.

After days of protests following the death of George Floyd, Seattle police left the boarded-up East Precinct building Monday night as a crowd of anti-police protesters set up barricades in the surrounding area, declaring six blocks in the city’s Capitol Hill neighborhood to be “autonomous” and a “cop-free zone.”

The president also described Seattle Mayor Jenny Durkan’s handling of the situation as “pathetic,” and asked “Has she ever done this before?” He also called on Washington Gov. Jay Inslee to send in National Guard troops to restore order.

“He’s got great National Guard troops so he can do it,” Trump said of Inslee. “But one way or the other, it’s going to get done. These people are not going to occupy a major portion of a great city.

Faulkner also raised the unrest following Floyd’s death, asking Trump to explain what he means when he describes himself as a “law and order president.”

“But when you see an event like that, with the more than eight minutes of horror — that’s eight minutes truly of horror, a disgrace,” Trump said of video showing then-Minneapolis police officer Derek Chauvin kneeling on Floyd’s neck on May 25.

“Then people start saying, ‘Well, are all police like that?’ They don’t know,” he added. “Maybe they don’t think about it that much. It doesn’t make any difference. The fact is they start saying, ‘Well, police are like that.’ Police aren’t like that. I mean, I’ve seen so many incredible things that they do. But you don’t see that … You don’t put it on television.

After playing a clip of the interview on “Special Report,” anchor Bret Baier asked Faulkner if Trump understood the “frustration, the anger, the fear” in the African-American community.

“He watched the eight minutes and 46 seconds, he said, of George Floyds death,” Faulkner said. “He, he taps into the loss and the hurt and the pain, and he understands that.”

However, Faulkner added that the traditional presidential role of “consoler-in-chief” didn’t appear to be as important to Trump.

“He thinks that fixing the economy is how you bring everybody together and bring them forth. He wants to restore the markings of black wealth and that rise that was happening in black communities economically,” Faulkner said. “And that’s how he wants to go for it.”

Elsewhere in the interview, Faulkner pressed Trump on his controversial “when the looting starts, the shooting starts” tweet during last month’s riots following Floyd’s death.

“Why those words?” asked Faulkner, who later explained that the phrase was first uttered by then-Miami police chief Walter Headley during the 1967 race riots.

“He was cracking down and he meant what he said,” Faulkner told Trump. “And he said, ‘I don’t even care if it makes it look like brutality. I’m going to a crackdown. When the looting starts, the shooting starts.’ That frightened a lot of people when you tweeted that.”

I’m sure that President Trump cannot believe what he is seeing out in Seattle.

The incompetent manner in which the Mayor of Seattle and the Governor of Washington State have handled things is the antithesis of the way that Trump built his business empire and the successful way that he was making America great again before the coronavirus hit.

President Trumpet is a typical New Yorker. He is bold and brash. He means what he says and he says what he means.

While he may not say things as eloquently as his predecessor, at least you don’t have to wade through a bunch of BS to get to the meaning of what he just said.

Make no mistake about it, the anarchist movement known as Antifa, which has brought riots to America’s major cities, has been planning all of this for some time now. We first saw a glimpse of it during the 2016 Presidential Campaign when then-candidate Trump’s campaign rallies were crashed by New Bolsheviks attempting to get on the news and to make the opposition to  Trump’s candidacy seem larger than it actually was.

We are witnessing that strategy being employed again.

By using the peaceful protests and the virtue signaling of the Far Left Democratic Politicians and Celebrities as their vanguard of apologizing imbeciles, the anarchists are paving the way for America’s “glorious future” as a Democratic Socialist country….or so they think.

While their actions may have a lot of Americans Ashamed and apologetic for sins which they have not committed, the Deplorables who made a Citizen Statesman the 45th President of the United States of America are ready to do it again on November 3, 2020.

IT IS TIME FOR AVERAGE AMERICANS TO TAKE OUR COUNTRY BACK.

IT IS TIME TO REOPEN AMERICA.

And, while “The Boss” is at it, he needs to evict those squatters in Seattle.

Since they hate our country, send them to the country which they have modeled their political philosophy after.

I hear the Siberian Gulags are lovely this time of year.

One thought on “Trump Warns That If Seattle Mayor Durkan and Gov. Inslee Don’t “Straighten Out” Seattle’s “Autonomous Zone”, “We’ll Straighten It Out””