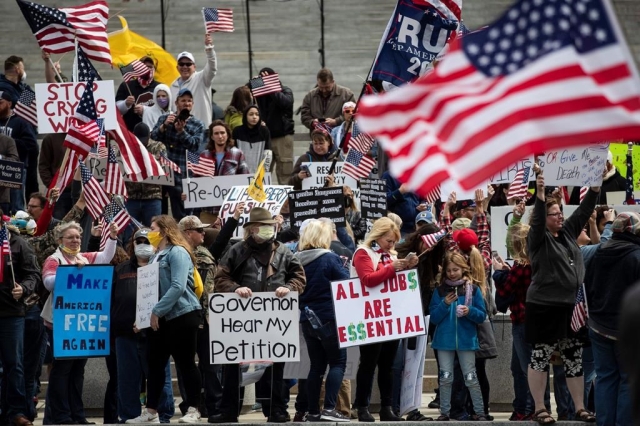 Why are governors and elected officials from states that are closed still getting paid? Is @realDonaldTrump the only one in government refusing a salary? I vote to stop paying them until their states are reopened and their constituents are back at work.

Unrest is growing Friday in the American states that have become the last holdouts in terms of announcing dates when their economies will start reopening during the coronavirus outbreak.

As the virus continues its deadly and unpredictable spread across the U.S., the economic losses are piling up as well, with more than 33 million Americans seeking jobless aid since the closures began.

The overwhelming majority of states have given businesses the green light to start reopening in hopes of containing the damage, with some going as far as allowing retail stores, restaurants and hairdressers to start serving customers again in limited capacities.

But other holdouts such as New York and Washington – despite revealing phased plans to do so – remain for the most part locked down indefinitely.

In Pennsylvania, Gov. Tom Wolf announced Friday that 13 western counties, including the Pittsburgh metropolitan area, would be permitted to gradually reopen next week, joining 24 counties across the northern part of the state. The only western county held back, Beaver County, is home to a severe nursing home outbreak where dozens have died and a congressman is calling for an investigation.

Beaver County officials blasted Wolf’s decision at a news conference Friday, saying the entire county shouldn’t be forced to stay shut down because of the problems at a single facility. The Beaver County district attorney, meanwhile, said he doesn’t want local police enforcing the business shutdown, nor would he prosecute violators.

“Our business owners and residents cannot become prisoners in our own county,” said Daniel Camp III, chairman of the Beaver County Board of Commissioners, calling Wolf’s decision to keep Beaver locked down “unwarranted and irrational.”

“I understand the frustration. But again the frustration has to be directed at the real enemy here. It’s the virus. It’s not the regulation,” he said.

“As we look at what we need to do to responsibly reopen the state, we can’t help but note that yesterday, May 6 — so this is now over two months since our first case — 325 people walked through or were taken through the doors of hospitals,” New Jersey Gov. Phil Murphy said Thursday as protesters amassed once again at its statehouse in Trenton, reportedly chanting “open New Jersey now” and “freedom over fear!”

New Jersey – another one of the holdouts – reopened its parks and golf courses last week. Murphy around that time told “Fox & Friends” that the rest of his state’s reopening can begin to be phased in “as soon as we can responsibly get the health challenges under control” — which he thinks could be in a matter of weeks, not months. But as of Friday, that exact date remains unclear.

In Maryland, protests broke out over the weekend with some people calling on Gov. Larry Hogan to lift the state’s stay-at-home order and closures, which as of this Friday remain in effect for many industries and businesses across the state with no clear end date in sight. Hogan told Fox News on Sunday that while he was sympathetic, the number of confirmed cases in Maryland is continuing to rise.

“We’re hoping to get our numbers to plateau so we can get things open as quickly as possible because we have too many people not working and too many businesses that are suffering,” he said.

And in New York — which has suffered the most coronavirus deaths of any state in the nation–Gov. Andrew Cuomo outlined a set of criteria this week that each region must meet before phase one of its opening plan can begin. The soonest any region could start reopening is May 15, as the state’s stay-at home orders expire on that date. Yet some regions are being held up solely because they lack the testing levels Cuomo is seeking, leaving residents guessing how long it will take to meet that threshold.

“I get the emotion — everybody would like to see everything reopen tomorrow. Me, first and foremost. Everyone. On every level – personally, economically,” Cuomo said during his daily press briefing Friday. “But… we are now in control and we have the virus on the run because we have been smart and because we have been disciplined.”

The debate on America reopening its economy hit a flashpoint on April 30, as dozens of protesters — some of whom were carrying rifles – gathered inside Michigan’s Capitol building to voice their opposition to Gov. Gretchen Whitmer’s stay-at-home order.

As of this week, the tensions there remain, as one Michigan state lawmaker was spotted heading into work while being flanked by armed escorts.

…Yet as states begin to pull back the restrictions on their economies, experts like Dr. Anthony Fauci, who is the head of the National Institute of Allergy and Infectious Diseases (NIAID) and a member of the Coronavirus Task Force – are urging them to take caution.

“You can’t just leap over things and get into a situation where you’re really tempting a rebound,” he told NBC’s “Today” show in a recent interview. “That’s the thing I get concerned about. I hope they don’t do that.

“When you pull back, there will be cases,” he added.

What began as a “national pandemic” has become a political war to determine if America remains a Constitutional Republic or if we become a “Democratic Socialist” (i.e., MARXIST) country.

The Democrats have been using fear as a motivation to get usually rational average Americans to remain isolated and unemployed.

Since they do not have the power of the Presidency, the Dems have used their political clout in blue states to attempt to herd Americans into obeying state and municipal elected politicians as if those politicians were shepherds and they were sheep.

As far as I am concerned, there was and is only one Good Shepherd and He wants us all to be free.

Cowering in fear and following like lost sheep are not things that come naturally to Americans.

We are direct descendants of people who braved long voyages to reach an undeveloped land full of unknown dangers.

And, after they got here and started to build a life for themselves, in order to secure their freedom, they, although greatly outnumbered, had to face the largest and most efficient army in the known world, even though they were greatly outmanned and outgunned, in a war to secure freedom for themselves, their children, and their children’ children.

When our Founders declared their freedom from tyranny, the document they wrote began as follows:

We hold these truths to be self-evident, that all men are created equal, that they are endowed by their Creator with certain unalienable Rights, that among these are Life, Liberty and the pursuit of Happiness.–That to secure these rights, Governments are instituted among Men, deriving their just powers from the consent of the governed…The Declaration of Independence, July 4, 1776

The majority of Americans want to get back to work. They want to provide for their families.

They want their individual freedom, their birthright as Americans, back.

Now, those who wish for Americans to continue to live cloistered like a bunch of Monks will claim that they “just want to keep us safe”.

Well, as of yesterday, it has been reported that 66% of those living in New York City who have contracted the Chinese Coronavirus have done it by following the guidelines put in place by the government: living in isolation, social distancing, and washing their hands often.

Americans are becoming restless because it is dawning on them that all of the economic gains which we have made as Americans under President Donald J. Trump over the last three years are being taken away from them in a political power play masked as a national “quarantine”.

I am certainly not saying do not use common sense as the coronavirus fades away.

What I am saying is this:

Americans have had enough of being “quarantined” when they are not even sick.

We, as a Facebook friend of mine keeps reminding me, are doing exactly what China wants us to do.

It is time to put Americans back to work before our country is “radically changed” into something that it was never meant to be.

We can not live in fear.